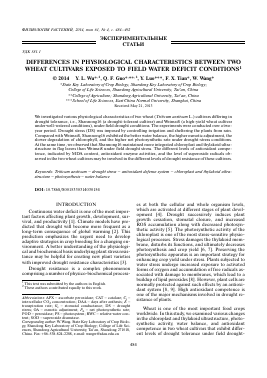 We investigated various physiological characteristics of two wheat (Triticum aestivum L.) cultivars differing in drought tolerance, i.e., Shannong16 (a drought-tolerant cultivar) and Weimai8 (a high-yield wheat cultivar under well-watered conditions), under field drought conditions. The experiments were conducted over a two-year period. Drought stress (DS) was imposed by controlling irrigation and sheltering the plants from rain. Compared with Weimai8, Shannong16 exhibited the better water balance, the higher osmotic adjustment, the slower degradation of chlorophyll, and the higher net photosynthetic rate under drought-stress conditions. At the same time, we observed that Shannong16 maintained more integrated chloroplast and thylakoid ultrastructure in flag leaves than Weimai8 under field drought stress. The different levels of antioxidant competence, indicated by MDA content, antioxidant enzyme activities, and the level of superoxide radicals observed in the two wheat cultivars may be involved in the different levels of drought resistance of these cultivars.

Continuous water deficit is one of the most important factors affecting plant growth, development, survival, and productivity [1]. Climate models have predicted that drought will become more frequent as a long-term consequence of global warming [2]. This prediction emphasizes the urgent need to develop adaptive strategies in crop breeding for a changing environment. A better understanding of the physiological and biochemical basis underlying plant stress resistance may be helpful for creating new plant varieties with improved drought resistance characteristics [3].

es at both the cellular and whole organism levels, which are activated at different stages of plant development [4]. Drought successively induces plant growth cessation, stomatal closure, and increased ROS accumulation along with decreased photosyn-thetic activity [5]. The photosynthetic activity of the chloroplast is one of the most stress-sensitive physiological processes. Stress damages the thylakoid membrane, disturbs its functions, and ultimately decreases photosynthesis and crop yield [6, 7]. Preserving the photosynthetic apparatus is an important strategy for enhancing crop yield under stress. Plants subjected to water stress undergo increased exposure to activated forms of oxygen and accumulation of free radicals associated with damage to membranes, which lead to a buildup of lipid peroxides [8]. However, plant cells are normally protected against such effects by an antioxidant system [8, 9]. High antioxidant competence is one of the major mechanisms involved in drought resistance of plants.

Wheat is one of the most important food crops worldwide. In this study, we examined various changes in the chloroplast and thylakoid ultrastructure, photo-synthetic activity, water balance, and antioxidant competence in two wheat cultivars that exhibit different levels of drought tolerance under field drought-

Table 1. The water content in field soil under conditions of drought stress (DS) and control (CK) after 25-day DS

"Vklues are means ± SE. Letters of number of kernels in each spike and yield of each plot indicate significant at a 0.05 level, others at a 0.01 level.

stress conditions. These results will help elucidate the physiological and biochemical mechanisms of wheat drought tolerance.

wheat (Triticum aestivum L.) cultivars, Shannong16 and Weimai8, were employed in this study. Shannong16 is an innovative wheat cultivar that has been planted widely in China in recent years due to its high yields under drought conditions. Weimai8 is another innovative wheat cultivar that is widely planted in China due to its high yield under well-watered conditions. The flowering dates of Shannong16 and Weimai8 were the same. The experiments were repeated twice during a two-year period.

Wheat plants were grown in the fields of Shandong Agricultural University, China, during the wheat growing seasons (October to June) of 2008-2009 and 2009-2010. Six 4 m2 interspersed plots were established in the field via a random block design, with three replicate plots per genotype. Wheat kernels were hand sown in eight lines, with rows spaced 25 cm apart. Wheat kernels were planted at an approximately 1-2 cm depth at a spacing of 5 cm. Conventional agricultural management was maintained during growth and development. The only difference between the treated plants and the control plants (CK) was the drought-stress treatment. Drought stress (DS) for treated plants was imposed by controlling irrigation and by sheltering the plants from the rain. For CK, the wheat plants were irrigated twice during growth and development, including once at the booting stage and once at the blooming stage. For drought stress, the treated plants were irrigated only once, i.e., at the

booting stage. The precipitation level during the wheat growing season was approximately 135 mm per year over the course of the study.

To measure the yield of each plot, all spikes in each plot (total of eight lines) were counted. Thirty randomly selected spikes were examined to obtain the average number of kernels in each spike, and 1000 kernels (with three replicates) were examined to determine the weight of 1000 seeds (g). The yield of each plot was obtained according to the multiplication by the number of spikes in each plot, the number of kernels in each spike, and the weight of 1000 kernels. Table 2 shows the means ± SE of three plots.

orientation of the leaves to achieve a suitable PFD). The measurements lasted approximately 10 min, during which no significant changes in the environment were observed. Six replicate measurements were conducted (with six flag leaves from different wheat plants used for each genotype).

The intrinsic efficiency (Fv/Fm) and actual efficiency (OPSII) of photosystem II (PSII) of the same wheat leaves that were employed for the gas exchange parameter measurements were measured with a portable FMS-2 pulse-modulated fluorometer ("Hansatech Instruments", United Kingdom). These measurements were performed after the leaves had been irradi-ance-adapted (800 ^mol/(m2 s)) for 30 min in a leaf clip connected to the fluorometer [11]. After determining photosynthetic gas exchange and chlorophyll fluorescence parameters in intact flag leaves, the leaves were harvested and subjected to other physiological and biochemical parameter measurements in the laboratory. Flag leaves were detached and immediately submersed in liquid nitroge