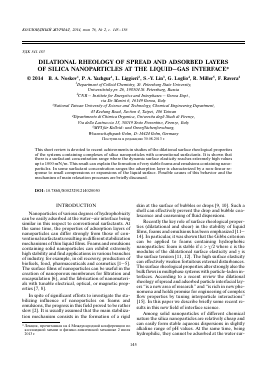 This short review is devoted to recent achievements in studies of the dilational surface rheological properties of the systems containing complexes of silica nanoparticles with conventional surfactants. It is shown that there is a surfactant concentration range where the dynamic surface elasticity reaches extremely high values up to 1000 mN/m. This result can explain the formation of very stable foams and emulsions containing nanoparticles. In some surfactant concentration ranges the adsorption layer is characterized by a non-linear response to small compressions or expansions of the liquid surface. Possible causes of this behavior and the mechanism of main relaxation processes are briefly discussed.

Nanoparticles of various degrees of hydrophobicity can be easily adsorbed at the water—air interface being similar in this respect to conventional surfactants. At the same time, the properties of adsorption layers of nanoparticles can differ strongly from those of conventional surfactants resulting in different stabilization mechanisms of thin liquid films. Foams and emulsions containing solid nanoparticles can exhibit extremely high stability and find applications in various branches of industry, for example, in oil recovery, production of biofuels, food, pharmaceuticals and cosmetics [1—5]. The surface films of nanoparticles can be useful in the creation of nanoporous membranes for filtration and encapsulation [6], and the fabrication of nanomateri-als with tunable electrical, optical, or magnetic properties [7, 8].

In spite of significant efforts to investigate the stabilizing influence of nanoparticles on foams and emulsions, the progress in this field proved to be rather slow [2]. It is usually assumed that the main stabilization mechanism consists in the formation of a rigid

skin at the surface of bubbles or drops [9, 10]. Such a shell can effectively prevent the drop and bubble coalescence and coarsening of fluid dispersions.

Recently the key role of surface rheological properties (dilatational and shear) in the stability of liquid films, foams and emulsions has been emphasized [11— 14]. In particular, it was shown that the Gibbs criterion can be applied to foams containing hydrophobic nanoparticles: foam is stable if s > y/2 where s is the modulus of the dilatational surface elasticity and y is the surface tension [11, 12]. The high surface elasticity can effectively weaken fortuitous external disturbances. The surface rheological properties alter strongly also the bulk flows in multiphase systems with particle-laden interfaces. According to a recent review the dilational rheology of spread and adsorbed particle interfacial layers "is a new area of research" and "is rich in new phenomena and holds promise for engineering of complex flow properties by tuning interparticle interactions" [15]. In this paper we describe briefly some recent results in this new field of interface science.

Among solid nanoparticles of different chemical nature the silica nanoparticles are relatively cheap and can easily form stable aqueous dispersions in slightly alkaline range of pH values. At the same time, being hydrophilic, they cannot be adsorbed at the water sur-

face and thereby stabilize foams and emulsions [16]. Even slight hydrophobization of silica nanoparticles changes strongly the surface properties of their dispersions and ensures the formation of stable foams. There are a few different ways to increase the degree of the particles' hydrophobicity. Using the silanization of the surface silanol groups, for example, with dichlorodim-ethylsilane one can obtain nanoparticles with different hydrophobicities and the surface SiOH content varying in a broad range [12, 13, 17, 18]. A more elaborate method consists in the grafting of silica nanoparticles with a surface active polymer [19, 20]. Another simpler way to increase the hydrophobicity of silica particles is to adsorb ionic surfactants onto oppositely charged particles [14, 21—29]. In this case it is sufficient to mix small volumes of surfactant solutions with nanoparticle dispersions to increase the dynamic surface elasticity and generate extremely stable emulsions and foams. The surface properties of the mixed solutions depend strongly on the surfactant concentration and surface age and are discussed in this work.

The first section is devoted to theoretical basics of the dilational surface rheology and its application to systems with microheterogeneous surfaces. The next section describes the main experimental techniques. After that the dilational properties of aqueous dispersion of the complexes of silica particles with surfactants are discussed. The last short section considers mixed spread layers of silica nanoparticles and lipids.

AND ITS APPLICATIONS TO AQUEOUS SOLUTION WITH NANO-AND MICROHETEROGENEOUS SURFACES

Although it has been known for many years that experimental methods of dilational surface rheology can estimate the main scale of surface heterogeneity [30], this possibility has not been exploited and the main models of surface rheology are related to homogeneous interfaces [31].

The system response to a small expansion or compression of the liquid surface is determined by the dynamic dilational surface elasticity E which is the ratio of the surface tension increment 5y and the corresponding increment of the relative surface area 5(ln S). This is a complex quantity and depends on the angular frequency ® of surface perturbations. The first and up to now most popular expression for E relates to the case of a surfactant adsorption layer with a purely diffusion controlled adsorption mechanism [32]

where the high frequency elasticity limit E0, the characteristic frequency ®D, and the parameter Z are given by

where t = (a k + pkc/r„) 1 is the relaxation time of the proper adsorption process, which for a Langmuir adsorption kinetics is determined by the kinetic coefficients of adsorption and desorption, ak and pk, respectively, and by the limiting adsorption T^.

A similar approach allows also the description of a system where a surface compression or expansion results simultaneously in the diffusion controlled surfactant exchange between the interface and the bulk phase, and a relaxation process inside the surface layer [34, 35].

The dilational surface elasticity of micellar solutions can be described by more cumbersome expressions [36]. In this case one has to consider separately the time scales corresponding to the fast and slow steps of micellar formation (disintegration). If the number of soluble surfactants exceeds one, the theory complicates to a greater extent. In this case, an exact solution was obtained only for a mixture of two surfactants under the condition of a diffusional exchange between the surface layer and the bulk phase [37].

There is an important limiting case when one can obtain a relatively concise expression of the dynamic surface elasticity for an arbitrary number of surfactants. If all the relaxation processes occur inside the surface layer, the surface elasticity E becomes a two-dimensional analogue of the bulk dilational dynamic elasticity. The latter plays the main role in ultrasound spectroscopy and was investigated in detail in [38, 39]. The formal techniques developed for the chemical relaxation in the bulk phase can be also applied to surface dilational elasticity. Almost all relaxation processes in the system can be treated formally as chemical reactions and thereby one can use the methods of linear algebra. They allow formally to come from a number of real processes in the surface layer to a system of "normal chemical reactions" when the matrices of thermodynamic derivatives and kinetic coefficients become simultaneously diagonal. This approach gives

the following expression of the dynamic surface elasticity [33]

where the superscript j = 1, 2 indicates the phase and r is the kinetic coefficient of the surfactant transition from the phase j to another two-dimensional phase.

Note that Eq. (5) coincides with the complex version of Maxwell's rheological model and can be also applied to a continuous two-dimensional phase coexisting with a number of three-dimensional aggregates in the adsorption layer, if they occupy a negligible surface area. Veer and van den