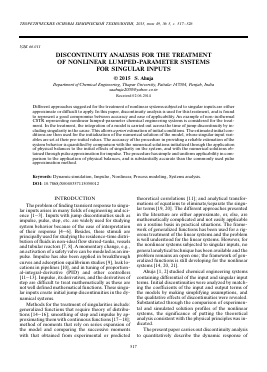 Different approaches suggested for the treatment of nonlinear systems subjected to singular inputs are either approximate or difficult to apply. In this paper, discontinuity analysis is used for this treatment, and is found to represent a good compromise between accuracy and ease of applicability. An example of non-isothermal CSTR representing nonlinear lumped-parameter chemical engineering systems is considered for the treatment. In the treatment, the integration of a model is carried out across the time of jump discontinuity by including singularity in the cause. This allows a priori estimation of initial conditions. The estimated initial conditions are then used for the initialization of the numerical solution of the model, whose singular input variables are set at their pre-initial values. The accuracy of the procedure in providing a reliable estimation of the system behavior is quantified by comparison with the numerical solutions initialized through the application of physical balances to the initial effects of singularity on the system, and with the numerical solutions obtained through pulse approximation for impulse. The procedure has simple and uniform applicability in comparison to the application of physical balances, and is substantially accurate than the commonly used pulse approximation method.

The problem of finding transient response to singular inputs arises in many fields of engineering and science [1—3]. Inputs with jump discontinuities such as impulse, pulse, step, etc. are widely used for studying system behavior because of the ease of interpretation of their response [4—6]. Besides, these stimuli are principally used for studying the residence-time distribution of fluids in non-ideal flow stirred-tanks, vessels and tubular reactors [7, 8]. A momentary change, e.g., an activation of a safety valve can be modeled as an impulse. Impulse has also been applied in breakthrough curves and adsorption equilibrium studies [9], leak locations in pipelines [10], and in tuning of proportional-integral-derivative (PID) and other controllers [11—13]. Impulse, its derivatives, and the derivatives of step are difficult to treat mathematically as these are not well defined mathematical functions. These singular inputs create initial jump discontinuities in the dynamical systems.

Methods for the treatment of singularities include: generalized functions that require theory of distributions [14—16]; smoothing of step and impulse by approximating them with continuous functions [17—18]; method of moments that rely on series expansion of the model and comparing the successive moments with that obtained from experimental or predicted

theoretical correlations [11]; and analytical transformations of equations to eliminate/separate the singular terms [19, 20]. The different approaches presented in the literature are either approximate, or, else, are mathematically complicated and not easily applicable on a routine basis in practical situations. The framework of generalized functions has been used for a rigorous treatment of the linear systems and the problem is well understood for the linear systems. However, for the nonlinear systems subjected to singular inputs, no general analytical technique has been available and the problem remains an open one; the framework of generalized functions is still developing for the nonlinear systems [14, 20, 21].

Ahuja [1, 2] studied chemical engineering systems containing differential of the input and singular input terms. Initial discontinuities were analyzed by matching the coefficients of the input and output terms of the models by making simplifying assumptions, and the qualitative effects of discontinuities were revealed. Substantiated through the comparison of experimental and simulated solution profiles of the nonlinear systems, the significance of putting the theoretical analysis consistent with the physical principles was indicated.

nonlinear systems to singular inputs without using the simplifying assumptions. The proposed treatment is easily applicable and reliably accurate. It is applicable to a set of first-order ODEs, i.e., the first-principles models representing the lumped-parameter chemical engineering systems. The higher order chemical engineering systems are also composed of the first-order ODEs. This paper in order presents the Methodology; Its application through examples; Discussion of numerical results, comparison of approaches, robustness, and numerical range of discontinuity values.

The proposed methodology estimates the initial conditions using the model by including singularity in the cause (A). Its accuracy in making a reliable estimation is quantified by comparison with the solutions initialized through the application of physical balances to the effects of singularity on the system behavior (B). The numerical solutions are also compared with that obtained by interpreting an impulse as the limit of an increasingly sharpened Gaussian pulse (C). Methods B and C are described in the next subsection.

In method A, discontinuity analysis is first applied to find out which variables of the state jump to a new value and by how much. Integration of the models is carried out across the time ofjump discontinuity, i.e., the pre-initial (0-) and post-initial (0+) time instants by including singularity in the cause (input function). The initial discontinuity values thus obtained are successively applied to compute the temporal evolution of the state of the system immediately following the introduction of the singular input. Consider a physical process represented by the following set of first-order nonlinear ODE system, which has an input variable suffering a singular perturbation.

where t is time, m(t) is the input forcing function, and

z(t) e are the functions consisting of dependent variables. The system is initially at a particular state at t ^ 0-. For impulse input at t ^ 0+, the forcing function m changes from its pre-initial value m(0 -) (steady or unsteady) to:

m(t) = m(0-) + MS(t -10) with t0 = 0+, (2) where M represents the magnitude of the impulse and 5 represents the unit-impulse function. Each Eq. in (1) is integrated at 0+ time by placing this value of the input function. The integrals of the terms in (1) are evaluated on a case by case basis described below. The applicability of the procedure is suggested in this study by its comparison with other approaches. The integrals of the terms with limited integrands vanish, i.e.:

The integral of the terms involving the product of the dependent variables with the impulse function are evaluated as:

Thus, the integral is zero everywhere except at t0 = 0+. The last Eq. (4) follows from the sifting property of the Dirac delta function. This property is applicable for smooth functions. Though z can have a discontinuity at the origin, yet it can be considered smooth from the right of the origin. In Eq. (4), the integral of the unit impulse function is one.

Evaluation of the integral of left side of Eq. (1) gives:

Using Eqs. (2)—(5), the set of Eq. (1) can be solved simultaneously to get the initial discontinuity in each

For the treatment of the systems under singular inputs, these initial conditions are used for carrying out the solution of the models subsequently. For the numerical integration of the models, the values of the singular input variables are substituted equal to their pre-initial values, since the effect of the impulse has already been included in the model while calculating the initial conditions and the impulse occurs at the initial instant only.

Other methods for comparison. In method B, the impulse is included in the effect, i.e., the effect of the introduction of impulse on the initial conditions of the system is quantified through the application of physical balances. Thus, the magnitude of the initial discontinuities are obtained by applying the physical principles of mass, energy, and momentum balances to the system at the initial instant of the introduction of the input. These discontinuity values are subsequently used to initialize the numerical solution in the same manner as in A above. The magnitudes of initial discontinuities calculated from initialization B are more accurate as compared to that calculated from a mathematical model of the physical system (initialization A), because of the inability of a model to completely represent the physical system affected by singularity at the origin. Our previous studies on the impulse response of some nonlinear chemical engineering systems had also shown that a discontinuity in the output variable, identified on applying the physical principles, couldn't be accounted for on a theoretical analysis of the model [2, 3]. This effect was substantiated by the finding that the numerical solution profiles were closer

Gauss pulse function for decreasing value of a