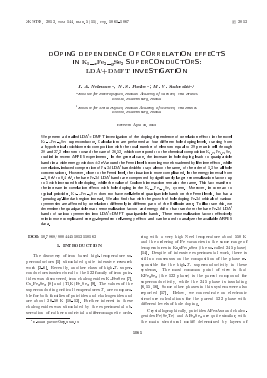 We present a detailed LDA'+DMFT investigation of the doping dependence of correlation effects in the novel Ki_j;Fe2_BSe2 superconductor. Calculations are performed at four different hole doping levels, starting from a hypothetical stoichiometric composition with the total number of electrons equal to 29 per unit cell through 28 and 27.2 electrons toward the case of 26.52, which corresponds to the chemical composition K0.70F01.72S02 studied in recent ARPES experiments. In the general case, the increase in hole doping leads to quasiparticle bands in a wide energy window ±2 eV around the Fermi level becoming more broadened by lifetime effects, while correlation-induced compression of Fo-3d LDA' bandwidths stays almost the same, of the order of 1.3 for all hole concentrations. However, close to the Fermi level, the situation is more complicated. In the energy interval from — 1.0 eV to 0.4 eV, the bare Fo-3d LDA' bands are compressed by significantly larger renormalization factors up to 5 with increased hole doping, while the value of Coulomb interaction remains the same. This fact manifests the increase in correlation effects with hole doping in the Ki ,.1-Vj system. Moreover, in contrast to

typical pnictides, Ki_j,Fo2-bSo2 does not have well-defined quasiparticle bands on the Fermi levels, but has a "pseudogap"-like dark region instead. We also find that with the growth of hole doping Fo-3d orbitals of various symmetries are affected by correlations differently in different parts of the Brillouin zone. To illustrate this, we determine the quasiparticle mass renormalization factors and energy shifts that transform the bare Fo-3d LDA' bands of various symmetries into LDA'+DMFT quasiparticle bands. These renormalization factors effectively mimic more complicated energy-dependent self-energy effects and can be used to analyze the available ARPES

The discovery of iron based high-temperature superconductors fl] stimulated quite intensive research work [2 6]. Recently, another class of high-Tc superconductors isostructural to the 122 family of iron pnictides was discovered, iron chalcogenides K3.Fe2Se2 [7], Cs3.Fe2Se2 [8] and (Tl,K)Fe3.Se2 [9]. The values of the superconducting critical temperatures Tc are comparable for both families of pnictides and chalcogenides and are about 30 50 K [10 13]. Further interest in these chalcogenides was stimulated by the experimental observation of rather nontrivial antiferromagnetic orde-

ring with a very high Neel temperature about 550 Iv and the ordering of Fe vacancies in the same range of temperatures in K0.8Fei.6Se2 (the so-called 245 phase) [14]. Despite of intensive experimental work, there is still 110 consensus 011 the composition of the phase responsible for the high-Tc superconductivity in these systems. The most common point of view is that KFe2Se2 (the 122 phase) is the parent compound for superconductivity, while the 245 phase is insulating [6,15,16]. Some other phases in this system were also reported [17]. Below, we concentrate 011 electronic structure calculations for the parent 122 phase with different levels of hole doping.

Crystallographically, pnictides AFe2As2 and chalcogenides Fe(Se,Te) and AFe2Se2 are quite similar, with the main structural mot iff determined by layers of

Fo(As,Se)4 totrahodra. Recently roportod theoretical electronic band structures of Fe(Se,Te) [18] and AFo-2 As2 [19 21] arc found to bo nearly identical to each other, especially for the bands crossing the Fermi level. AFo-2 As2 and AFe2Se2 compounds are simply isostructural. However, the LDA (local density approximation) electronic structure of AFe2Se2 differs quite remarkably from that of AFe2As2, as was directly shown in Refs. [15,22,231.

From the very beginning of studies of iron-based superconductors, it was recognized that the account of electronic correlations on Fe sites is rather essential for the correct description of the physics of pnictido materials [24 27]. For this, the LDA-DMFT hybrid computational scheme [28] was used. The main conclusion was that correlations lead to simple narrowing (compression) of the LDA bandwidth by a factor ranging from 2 or 3. This observation agrees rather well with the variety of angular-resolved photoomission spectroscopy (ARPES) data on AFe2As2 compounds 6. Fermi surface maps obtained from ARPES experiments for AFo2As2 are quite similar to those obtained from simple LDA calculations: there are two or three hole cylinders around the F point in the Brillouin zone and two electron Fermi surface sheets around the (tsvtt) point.

Until recently, only a few LDA^DMFT papers were devoted to Fe chalcogonidos [29,30]. We recently investigated the electronic structure of hole-doped iron chalcogonido K0.76F01.72S02 in the normal phase [31], inspired by available ARPES data for this system [34], especially those obtained in Ref. [35], using both the standard LDA-DMFT and the novel LDA'-DMFT computational approaches [32,33]. The results of our calculations agree rather well with the general picture of ARPES obtained in Ref. [35], with the LDA'-DMFT results showing a slightly better agreement. We showed that this iron chalcogonido is actually more strongly-correlated in the sense of the bandwidth renormaliza-tion (energy scale compression by a factor of about 5 in the energy interval ±1.5 oV around the Fermi level) than the typical iron pnictides (with a compression factor of about 2 or 3 [G]), although the Coulomb interaction strength is almost the same in both families. Moreover, the Ko.76Foi.72Se2 system demonstrates the absence of well-defined quasiparticle bands 011 the Fermi level, in contrast to pnictides.

In this paper, we continue our LDA'-DMFT study of the system. We investigate the evolution of correlation effects upon hole doping by performing LDA'— + DMFT calculations at four doping levels: the hypothetical stoichiometric composition with 29 valence

electrons per unit cell, through intermediate values of valence electrons 28 and 27.2 down to the experimentally obtained composition Ko.76Fci.72So2 with 26.52 electrons per unit cell. We demonstrate in what follows that the actual doping dependence of correlation effects 011 the electronic structure in iron chalcogonidos is apparently more complicated than in iron pnictides and does not reduce to the simple picture of universal bandwidth renormalization (compression).

This paper is organized as follows. In Sec. 2, we discuss the crystallographic structure and methodological and computational details of LDA'—DMFT. A comparative study of LDA' bands and LDA'-DMFT spectral function maps within wide and narrow energy intervals around the Fermi level, together with orbit ally resolved densities of states, is presented in Sec. 3. We summarise our results in Sec. 4.

To take local Coulomb correlations into account, we here use the LDA'-DMFT [32,33] approach, which is a modification of the well-known LDA-DMFT method [28]. The LDA-DMFT Hamiltonian is usually written as

The general problem with LDA-DMFT is that some portion of local electron electron interaction for presumed correlated d shells is already included in the standard LDA (HLDA). To avoid its double counting due to the Hubbard interaction HHuh, we have to subtract the so-called double-counting correction term HDC from HLDA. (Explicit expressions for HLDA and ll""h can bo found in [33].) The I.DA' I).\IFT approach is the new attempt to solve the double-counting problem, which is due to the absence of a universal expression for HDC, because there is 110 explicit microscopic (or diagrammatic) link between the model (Hubbard-like) Hamiltonian approach and the standard LDA.

In brief, the main idea of LDA'-DMFT is to explicitly exclude the contribution of the presumably

strongly correlated d shells from the charge density at the initial step of LDA calculations. Then, this redefined charge density (for some chosen orbital basis ¥>i(r))

is used to calculate the local exchange-correlation energy in LDA and perform self-consistent LDA band structure calculations for correlated bands at the LDA stage of LDA+DMFT. The local d-d electron correlations are subsequently taken into account within DMFT. All states not counted as strongly correlated are then treated with the full power of DFT/LDA and the full p in E%cDA.

Once this LDA7 calculations with the redefined charge density were done, just the Hartree contribution to the interaction of correlated states is left at the LDA stage; which can be written in the fully localized limit form (FLL), which is the most consistent definition of the double-counting term here (other forms can be also used [33]):