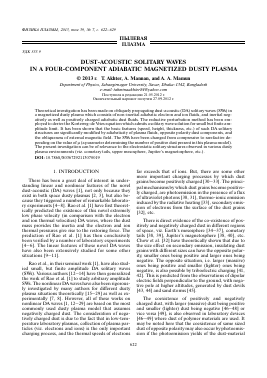 Theoretical investigation has been made on obliquely propagating dust-acoustic (DA) solitary waves (SWs) in a magnetized dusty plasma which consists of non-inertial adiabatic electron and ion fluids, and inertial negatively as well as positively charged adiabatic dust fluids. The reductive perturbation method has been employed to derive the Korteweg-de Vries equation which admits a solitary wave solution for small but finite amplitude limit. It has been shown that the basic features (speed, height, thickness, etc.) of such DA solitary structures are significantly modified by adiabaticity of plasma fluids, opposite polarity dust components, and the obliqueness of external magnetic field. The SWs have been changed from compressive to rarefactive depending on the value of ц (a parameter determining the number of positive dust present in this plasma model). The present investigation can be of relevance to the electrostatic solitary structures observed in various dusty plasma environments (viz. cometary tails, upper mesosphere, Jupiter's magnetosphere, etc.).

There has been a great deal of interest in understanding linear and nonlinear features of the novel dust-acoustic (DA) waves [1], not only because they exist in both space dusty plasmas [2, 3], but also because they triggered a number of remarkable laboratory experiments [4—8]. Rao et al. [1] have first theoretically predicted the existence of this novel extremely low phase velocity (in comparison with the electron and ion thermal velocities) DA waves, where the dust mass provides the inertia and the electron and ion thermal pressures give rise to the restoring force. The prediction of Rao et al. [1] has then conclusively been verified by a number of laboratory experiments [4—6]. The linear features of these novel DA waves have also been extensively studied for some other situations [9—11].

Rao et al., in their seminal work [1], have also studied small, but finite amplitude DA solitary waves (SWs). Various authors [12—14] have then generalized the work of Rao et al. [1] to study arbitrary amplitude SWs. The nonlinear DA waves have also been rigorously investigated by many authors for different dusty plasma situations theoretically [15—29] as well as experimentally [7, 8]. However, all of these works on nonlinear DA waves [1, 12—29] are based on the most commonly used dusty plasma model that assumes negatively charged dust. The consideration of negatively charged dust is due to the fact that in low-temperature laboratory plasmas, collection of plasma particles (viz. electrons and ions) is the only important charging process, and the thermal speeds of electrons

There is direct evidence of the co-existence of positively and negatively charged dust in different regions of space, viz. Earth's mesosphere [34—37], cometary tails [38, 39], Jupiter's magnetosphere [38, 40], etc. Chow et al. [32] have theoretically shown that due to the size effect on secondary emission, insulating dust grains with different sizes can have the opposite polarity, smaller ones being positive and larger ones being negative. The opposite situation, i.e. larger (massive) ones being positive and smaller (lighter) ones being negative, is also possible by triboelectric charging [41, 42]. This is predicted from the observations of dipolar electric fields perpendicular to the ground, with negative pole at higher altitudes, generated by dust devils [43, 44] and sand storms [45].

The coexistence of positively and negatively charged dust, with larger (massive) dust being positive and smaller (lighter) dust being negative [46—48] or vice versa [49], is also observed in laboratory devices [46—49] where dust of polymer materials are used. It may be noted here that the coexistence of same sized dust of opposite polarity may also occur by photoemission if the photoemission yields of the dust-material

are very different [50]. Recently, motivated by these theoretical predictions and satellite/experimental observations, a number of authors [41, 51—56] have considered a dusty plasma with dust of opposite polarity, and have investigated linear [41, 52] and nonlinear [51, 53-56] DA waves.

Recently, Tasnim et al. [57] assumed a four-component adiabatic dusty plasma containing adiabatic electrons, adiabatic ions, adiabatic positively and as well as negatively charged warm dust. The above mentioned works [51, 53-58] are limited to one-dimension, which may not be the realistic situation in space and laboratory devices, and the effects of the external magnetic field have not been considered in all of the previous works. We know that, the effect of external magnetic field drastically modifies the properties of electrostatic solitary structures [59-62]. However, using reductive perturbation method the effects of magnetic field on solitary structures of dusty plasma, have been successfully studied by various authors [63-67]. Bedi et al. [64] have considered a dusty plasma system consisting of non-thermal electrons, Maxwellian ions, negatively and positively charged warm adiabatic dust particles, and studied the basic features of the electrostatic solitary structures by deriving the Korteweg-de Vries (K-dV) equation.

It is now well known that the effects of dust fluid temperature and adiabaticity of ion or electron fluid significantly modify all the basic nonlinear features of such ultra-low-frequency DA waves. Therefore, in our present work, we consider more general, more realistic, and consistent magnetized dusty plasma system (containing non-inertial adiabatic electron and ion fluids, and inertial negatively as well as positively charged adiabatic dust fluids, and investigate the basic properties of finite amplitude DA SWs by the reductive perturbation method [68].

[34-37], and Jupiter's magnetosphere [38, 40], where dust is charged by the secondary emission or photoemission or thermionic emission, and the dust size effect on the latter is important. The dynamics of the three dimensional DA waves [3, 13, 22] in such a dusty plasma system is governed by