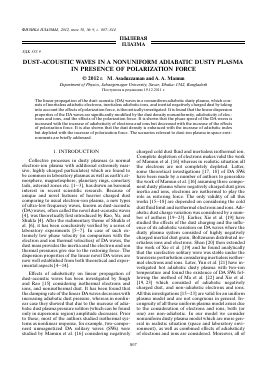 Collective processes in dusty plasmas (a normal electron-ion plasma with additional extremely massive, highly charged particulates) which are found to be common in laboratory plasmas as well as earth's atmosphere, magnetosphere, planetary rings, cometary tails, asteroid zones etc. [1—3], has drawn an baronial interest in recent scientific research. Because of unique and novel features of heavier charged dust comparing to usual electron-ion plasma, a new types of ultra-low frequency waves, known as dust-acoustic (DA) waves, often called the novel dust-acoustic waves [4], was theoretically first introduced by Rao, Yu, and Shukla [4]. After the rudimentary theme of Shukla et al. [6], it has been conclusively verified by a series of laboratory experiments [5—7]. In case of such extremely low phase velocity (in comparison with the electron and ion thermal velocities) of DA waves, the dust mass provides the inertia and the electron and ion thermal pressures give rise to the restoring force. The dispersion properties of the linear novel DA waves are now well established from both theoretical and experimental aspects [4—14].

Effects of adiabaticity on linear propagation of dust-acoustic waves has been investigated by Singh and Rao [15] considering isothermal electrons and ions, and nonisothermal dust. It has been found that the damping rate of the linear DA waves decreases with increasing adiabatic dust pressure, whereas in nonlinear case they showed that due to the increase of adiabatic dust plasma pressure soliton (which can be found only in supersonic region) amplitude decreases. Prior to these, most of the authors studied isothermal systems as nonlinear response, for example, two-component unmagnetized DA solitary waves (SWs) were studied by Mamun et al. [16] considering negatively

charged cold dust fluid and inertialess isothermal ion. Complete depletion of electrons makes valid the work of Mamun et al. [16] whereas in realistic situation all the electrons are not completely depleted. Latter, some theoretical investigations [17, 18] of DA SWs have been made by a number of authors to generalize the work of Mamun et al. [16] assuming three component dusty plasma where negatively charged dust gives inertia and ions, electrons are isothermal to play the role as restoring force. The only validity of all this works [15—18] are depended on considering the cold dust fluid limit and isothermal electrons and ions. Adi-abatic dust charge variation was considered by a number of authors [19—23]. Earlier, Xie et al. [19] have studied the effects of the dust charging and the influence of its adiabatic variation on DA waves where the dusty plasma system consisted of highly negatively charged inertial dust grain, Boltzmann distributed inertialess ions and electrons. Shan [20] then extended the work of Xie et al. [19] and he found analytically that the rarefactive solitary wave was stable under the transverse perturbation considering inertialess isothermal electrons and ions. Later, Yun et al. [21] have investigated hot adiabatic dusty plasma with two-ion temperature and found the existence of DA SWs following the method of Ma et al. [22] and Xie et al. [19,23] which consisted of adiabatic negatively charged dust, and non-adiabatic electrons and ions. All this investigations [15—23] are valid for an uniform plasma model and are not congruous in general. Incongruity of all these uniform plasma model arises due to the consideration of electrons and ions, both (or one) are non-adiabatic. In our model we consider nonuniform dusty plasma model which are more general in realistic situation (space and laboratory environment), as well as combined effects of adiabaticity of electrons and ions are considered. Moreover, all of

these theoretical investigations are valid only in that plasma situations (uniform plasma model) where the effects of polarization force are not taken into account.

The polarization force (Fp) acting on a dust grain is, mathematically, defined as [24—26]

electrostatic potential), one can simplify the polariza-

R1 = (zde2 /4Ti0X Di0)w is a parameter determining the modified strength/effects of polarization force (which arises due to the interaction between adiabatic ions and highly negatively charged dust grains), ni0 is the ion number density at equilibrium, and X Dio —

To the best of our knowledge, no attempt has been made on nonuniform adiabatic dusty plasma system in presence of polarization force, and in order to contribute the new insights of physics we, in our present work, have taken into account the effects of polarization force in an adiabatic dusty plasma system and have rigorously investigated the linear DA waves in a nonuniform plasma containing adiabatic electrons-ions, and negatively charged dust. Here, collisional and charge variation effects are neglected and the density gradients are not very sharp, so that the zeroth order fields and velocities can be neglected.

The manuscript is organized as follows: The basic equations governing an adiabatic dusty plasma system (under consideration) are given in Sec. 2. The linear analysis (i.e., the basic features of the linear DA waves with adiabatic electrons and ions) and different cases are studied in Sec. 3. Finally, numerical analysis and discussions are briefly represented in Sec. 4.

To study the effects of adiabaticity of electrons and ions in a dusty plasma system comprises with polarization force, we consider a three compo