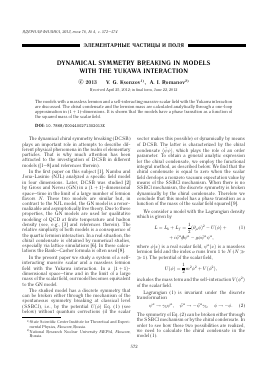 DYNAMICAL SYMMETRY BREAKING IN MODELS WITH THE YUKAWA INTERACTION

The models with a massless fermion and a self-interacting massive scalar field with the Yukawa interaction are discussed. The chiral condensate and the fermion mass are calculated analytically through a one-loop approximation in (1 + 1)-dimensions. It is shown that the models have a phase transition as a function of the squared mass of the scalar field.

The dynamical chiral symmetry breaking (DCSB) plays an important role in attempts to describe different physical phenomena in the realm of elementary particles. That is why much attention has been attracted to the investigation of DCSB in different models ([1—8] and references therein).

In the first paper on this subject [1], Nambu and Jona-Lasinio (NJL) analyzed a specific field model in four dimensions. Later, DCSB was studied [2] by Gross and Neveu (GN) in a (1 + 1)-dimensional space—time in the limit of a large number of fermion flavors N. These two models are similar but, in contrast to the NJL model, the GN model is a renor-malizable and asymptotically free theory. Due to these properties, the Gn models are used for qualitative modeling of QCD at finite temperature and hadron density (see, e.g., [3] and references therein). The relative simplicity of both models is a consequence of the quartic fermion interaction. In a real situation, the chiral condensate is obtained by numerical studies, especially via lattice simulations [6]. In these calculations the Bank—Casher formula is often used [8].

In the present paper we study a system of a self-interacting massive scalar and a massless fermion field with the Yukawa interaction. In a (1 + 1)-dimensional space—time and in the limit of a large mass of the scalar field, our model becomes equivalent to the GN model.

The studied model has a discrete symmetry that can be broken either through the mechanism of the spontaneous symmetry breaking at classical level (SSBCl), i.e., by the potential U(4>) Eq. (1) (see below) without quantum corrections (if the scalar

includes the mass term and the self-interaction V(rf>2) of the scalar field.

Lagrangian (1) is invariant under the discrete transformation

The chiral condensate is given by the functional integral

where Z is a normalization constant and n is the spacetime dimension. Equation (3) can be rewritten as

It should be noted that the accuracy of Eq. (9) is determined by that of the stationary phase approximation. One can see from Eq. (9) that the chiral condensate is equal to zero when the scalar field obtains a vacuum expectation value through the SSBCl mechanism because in this case the classical potential U(0) has a minimum at 0 = 0m.

In order to study the properties of the chiral condensate, we need to choose a specific potential of the scalar field. We take the potential U(0) as

Integrating by parts [10], we obtain

The fermionic Lagrangian is purely quadratic in the fields and we can therefore integrate over them, getting

In the following, we limit the consideration to the case of n = (1 + 1)-dimensional space—time. In this case constants g and A are dimensional, and it is convenient to introduce dimensionless coupling constants

Rescaling the scalar field as 0(x) = m0(x) (and omitting the bar in the rescaled field), we rewrite the effective action (7) as

where the effective action S is

The stationary point is given by the solutions of

We calculate the chiral condensate using the method of the stationary phase. A minimum of the effective action of the system can be reached if the effective potential and kinetic energy are minimal each on its own:

To investigate the properties of the chiral condensate we consider the following two possibilities: (i) Ao = Q. In this case the solutions of Eq. (12) are

That is possible if 0m is a constant, which must satisfy Eq. (8). The factor in front of the exponent in Eq. (6) is fixed at the point 0 = 0m, which allows to evaluate the integral, one obtains

we get the chiral condensates (9) as

This expression reproduces the result of [2]. Here, we multiply on g0 the chiral condensate to obtain a renormalization invariant quantity. Indeed, the GN model is asymptotically free and the f3 function in one-loop approximation is [2]

Using (16), one can verify that x— does not depend on the choice of renormalization point, so the fermionic mass ¡f = = go0m is a meaningful physical quantity. If we change the sign in front of the 02 term in Eq. (11), we get

This equation does not admit analytic solutions for an arbitrary Ao. We will consider Ao/g"^N < 1, in which case one can solve Eq. (18) by perturbing around

Then from (13) the chiral condensate is given by

Here, the solution j— was chosen for a definiteness. The fermionic mass in this case yields

One can see that the scalar field potential destroys the renormalization invariance of the fermionic mass (22).

To summarize, in this paper we studied dynamical chiral symmetry breaking in a model which consists of a fermion field and a self-interacting scalar field, with the Yukawa interaction between the two fields. In our model, the discrete chiral symmetry can be broken either by the SSBCl mechanism or dynamically by a nonzero chiral condensate. It was shown that the presence of the SSBCl mechanism does not allow for a nonzero chiral condensate. We further constrained the study to a (1 + 1)-dimensional space—time and in the limit of large N. Also, the self-interaction of the scalar field was assumed to be treatable as perturbation. In this case analytic expressions for the chiral condensate and the fermionic mass have been obtained. We conclude that the model considered has a phase transition as function of m2, since the chiral condensate is equal to zero in the SSBCl case (m2 < 0) and is not zero in the case m2 > 0. The method proposed here makes it possible to calculate the chiral condensate for various scalar potentials and for arbitrary space—time dimensions.