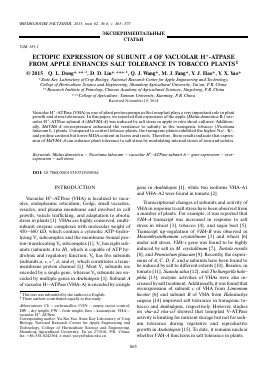 Vacuolar H+-ATPase (VHA) as one of plant proton pumps in the tonoplast plays a very important role in plant growth and stress tolerances. In this paper, we reported that expression of the apple (Malus domestica B.) vacuolar H+-ATPase subunit A (MdVHA-A) was induced by salt stress in apple in vitro shoot cultures. Additionally, MdVHA-A overexpression enhanced the resistance to salinity in the transgenic tobacco (Nicotiana tabacum L.) plants. Compared to control tobacco plants, the transgenic plants exhibited the higher Na+, K+, and proline content but lower MDA content in leaves and roots. Therefore, these results indicate that expression of MdVHA-A can enhance plant tolerance to salt stress by modulating internal stores of ions and solutes.

Vacuolar H+-ATPase (VHA) is localized to vacuoles, endoplasmic reticulum, Golgi, small vacuoles, vesicles, and plasma membrane and involved in cell growth, vesicle trafficking, and adaptation to abiotic stress in plants [1]. VHAs are highly conserved, multi-subunit enzyme complexes with molecular weight of 450—600 kD, which contain a cytosolic ATP-hydro-lyzing V1 subcomplex and the membrane-bound proton-translocating V0 subcomplex [1]. V1 has eight sub-units (subunits A to H), which is capable of ATP hydrolysis and regulatory function; V0 has five subunits (subunits a, c, c", d, and e), which constitutes a transmembrane proton channel [1]. Most V1 subunits are encoded by a single gene, whereas V0 subunits are encoded by multiple genes in Arabidopsis [1]. Subunit A ofvacuolar H+-ATPase (VHA-A) is encoded by a single

2 These authors contributed equally to this study.

gene in Arabidopsis [1], while two isoforms VHA-A1 and VHA-A2 were found in tomato [2].

Transcriptional changes of subunits and activity of VHA in response to salt stress have been observed from a number of plants. For example, it was reported that VHA-A transcript was increased in response to salt stress in wheat [3], tobacco [4], and sugar beet [5]. Transcript up-regulation of VHA-B was observed in Mesembryanthemum crystallinum [3] and wheat [6] under salt stress. VHA-c gene was found to be highly induced by salt in M. crystallinum [7], Tortula ruralis [8], and Pennisetum glaucum [9]. Recently, the expressions of A, C, D, F, and a subunits have been found to be induced by salt to different extents [10]. Besides, in tomato [11], Suaedasalsa [12], and Thellungiellahalo-phila [13], enzyme activities of VHAs were also increased by salt treatment. Additionally, it was found that overexpression of subunit c of VHA from Limonium bicolor [6] and subunit B of VHA from Halostachys caspica [14] improved salt tolerance in transgenic tobacco and Arabidopsis, respectively. However, studies on vha-a2 vha-a3 showed that tonoplast V-ATPase activity is limiting for nutrient storage but not for sodium tolerance during vegetative and reproductive growth in Arabidopsis [15]. To date, it remains unclear whether VHA-A functions in salt tolerance in plants.

In this paper, an apple VHA-A (MdVHA-A), which was cloned in our previous study [16], was selected to examine whether to respond to salt stress. And finally, transgenic tobacco plants ectopically expressing MdVHA-A was obtained and used to identify its biological function in the improvement of salinity.

Tobacco (Nicotiana tabacum L., NC89) was used for gene transformation as well as for salt stress assay. The transgenic and empty vector control (CON) tobacco seedlings were cultured on B5 medium with a 14/10-h (light/dark) photoperiod at approximately 600 mmol/(m2 s) at 25°C. For salt stress, the seedlings at day 4 after germination were cultured on B5 medium supplemented with 100, 200, and 300 mM NaCl.

Besides, the transgenic and CON tobacco plants were planted in 15-cm-diameter plastic pots lled with a 2 : 1 (v/v) mixture of soil : vermiculite with a 14/10-h (light/dark) photoperiod at approximately 600 mmol/(m2 s) at 25°C. For salt assay, the 10-week-old tobacco plants were subjected to 0, 100, 200, and 300 mM NaCl, respectively. For each group, the concentration of NaCl was increased stepwise by 50 mM every 2 days to the final concentration.

Four individual plants were selected from wild type, CON and each line of transgenic plants to compose plant material for each replicate of the following determinations in the paper.

Gene expression analysis with quantitative RT-PCR (qRT-PCR). Total RNAs were extracted using a hot borate method described in our previous report [17]. For qRT-PCR, the specific primers of MdVHA-A were designed according to the 3'-UTRs with the forward primer 5' -AAACCCGGTGATTGAACATCT- 3' and the reverse primer 5'- CCCTAACACTGTCCTTCT-TCGT-3'. The 18S gene (forward primer 5'-ACACGGGGAGGTAGTGACAA- 3' and reverse primer 5'-CCTCCAATGGATCCTCGTTA- 3') was used as the endogenous control. qRT-PCRs were performed using iQ5 instrument ("Bio-Rad", USA) according to the method previously described by Dong et al. [18].

VHA activity assay. Tobacco tonoplast vesicles were isolated for measurement of VHA activity by sucrose density gradient ultracentrifUgation as described in our previous report [19]. About 5 g of leaves were homogenized in 10 mL of ice-cold buffer containing 100 mM Tricine/Tris (pH 8.0), 300 mM mannitol, 3 mM MgSO4, and 3 mM EGTA. Prior to use, 5 mM dithiothreitol (DTT) and 1 mM phenylmethylsulphonyl uoride (PMSF) were added to the buffer. After ltration and pre-centrifugation of the homogenate at 5000 g for 10 min, the suspension was centrifuged at 100000 gfor 35 min, and the pellet was resuspended in a small volume of ice-cold buffer containing 100 mM Tricine/Tris (pH 8.0), 300 mM mannitol, 3 mM MgSO4, 3 mM EGTA, and 5 mM DTT. The suspension containing the vesicles was layered over 10 to 25% (w/w) discontinuous sucrose gradient solution with 5 mM Hepes/Tris (pH 7.5), and 2 mM DTT After centrifu-gation at 100000 g for 2 h, the vesicles at the interface between 10 and 25% sucrose solutions were collected, and diluted with 3-fold volumes of ice-cold buffer containing 10 mM Hepes/NaOH (pH 7.0), 3 mM MgSO4, and 1 mM DTT. Membranes were collected by cen-trifugation at 100000 g for 35 min and resuspended in storage buffer with 10 mM Hepes/NaOH (pH 7.0), 40% (v/v) glycerol, 1 mM DTT, and 1 mM PMSF, and stored at —70°C for further analysis.

The purity of the vesicles was estimated with vanadate, nitrate, and azide as inhibitors. The tonoplast H+-ATPase is characterized by inhibition by nitrate, the H+-ATPase in plasma membrane and mitochondria are inhibited by vanadate and azide, respectively. In the present study, nitrate inhibited H+-ATPase activity by more than 81%, but vanadate and azide reduced the enzyme activity by less than 3%, demonstrating that the vesicles were enriched in tonoplasts. VHA activity was measured as the release of inorganic phosphate from ATP during an incubation period of 30 min at 37°C; the mixture for the assay of enzyme activity contained 30 mM Hepes-Tris (pH 7.5), 50 mM KCl, 3 mM MgSO4, 0.1 mM ammonium mo-lybdate, 0.25 mM Na3VO4, 2 mM ATP-Na2, and 100 ^L of tonoplast vesicles [19]. Protein was quantified with dye-binding assay using bovine serum albumin as standard.

Transformation of MdVHA-A into tobacco plants.

To assess the function of MdVHA-A in tobacco, 1872-bp ORF of MdVHA-A gene was cloned from the 'Orin' apple (Malus domestica B.) with a pair of primers (the forward primer 5'-GCGGATCCATGCCG-GCGGTGTACGGT-3' and the reverse primer 5'-GCGTCGACTCACCGGGTTTCATCCTC-3'), and then inserted into the vector pBI121 downstream to CaMV 35S promoter. The resultant vector was in-

Tobacco leaves were sterilized with 70% ethanol for 10 s, followed by soaking in 4% NaClO for 10 min. After washing with sterilized H2O, those leaves were cut into 1 x 1 cm explants which were then immersed in Agro-bacterium suspension for 10 min and co-cultivated on MS medium for 2 days. After washing with sterilized H2O supplemented with 250 mg/L carbenicillin (Cb), the explants were shifted onto selection medium containing 0.2 mg/L NAA,