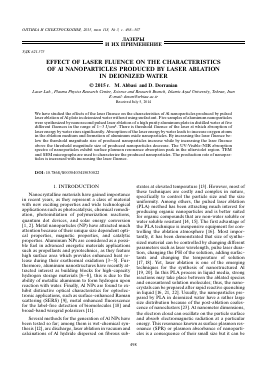 Nanocrystalline materials have gained importance in recent years, as they represent a class of material with new exciting properties and wide technological applications such as photocatalysis, chemical remediation, photoinitiation of polymerization reactions, quantum dot devices, and solar energy conversion [1,2]. Metal nanoparticles (NP) have attracted much attention because of their unique size dependent optical properties, magnetic properties, and catalytic properties. Aluminum NPs are considered as a possible fuel in advanced energetic materials applications such as propellants and pyrotechnics, as they feature high surface area which provides enhanced heat release during their exothermal oxidation [3—5]. Furthermore, aluminum nanostructures have recently attracted interest as building blocks for high-capacity hydrogen storage materials [6—8], this is due to the ability of metallic aluminum to form hydrogen upon reaction with water. Finally, Al NPs are found to exhibit distinctive optical characteristics for optoelectronic applications, such as surface-enhanced Raman scattering (SERS) [9], metal enhanced fluorescence for the label-free detection of biomolecules [10] and broad-band wiregrid polarizers [11].

Several methods for the generation of Al NPs have been tested so far; among them is wet-chemical synthesis [12], arc discharge, laser ablation in vacuum and calcinations of Al hydride dispersed on fibrous sub-

strates at elevated temperature [13]. However, most of these techniques are costly and complex in nature, specifically to control the particle size and the size uniformity. Among others, the pulsed laser ablation (PLA) method has been attracting much interest for producing organic nanoparticles and is better suited for organic compounds that are non-water soluble or water soluble resistant [14, 15]. The first advantage of the PLA technique is inexpensive equipment for controlling the ablation atmosphere [16]. Most importantly, it has been demonstrated that size of synthesized material can be controlled by changing different parameters such as laser wavelength, pulse laser duration, changing the PH of the solution, adding surfactants and changing the temperature of solution [17, 18]. Yet, laser ablation is one of the emerging techniques for the synthesis of nanostructured Al [19, 20]. In this PLA process in liquid media, strong reactions may take place between the ablated species and encountered solution molecules; thus, the nano-crystals can be prepared after rapid reactive quenching in liquid [16, 21, 22]. Usually, the nanoparticles prepared by PLA in deionized water have a rather large size distribution because of the post-ablation coalescence of nanoclusters [23]. At nanometer dimensions, the electron cloud can oscillate on the particle surface and absorb electromagnetic radiation at a particular energy. This resonance known as surface plasmon resonance (SPR) or plasmon absorbance of nanoparti-cles is a consequence of their small size but it can be

influenced by numerous factors, in particular, solvent and surface functionalization are the important contributors to the exact frequency and intensity of the band [24]. The wavelength and width of the SPR band depend on the size, morphology, spatial orientation, and optical constants of the particles and the embedding medium [25]. Plasmonic behavior of laser produced nanoparticles has attracted attention especially using nanosecond Nd:YAG and femtosecond (fs) Ti:Sapphire laser [26]. Recently, Simakin et al. have presented a work on the effect of laser wavelength, flu-ence, and ablation medium on the characteristics of nanoparticles produced by laser ablation method, but they have used different materials, and their results are not focused on the production of aluminum nanopar-ticles in water [27]. The purpose of this work is to investigate the effect of laser pulse energy on the size of nanostructure of Al nanoparticles at room temperature. This article is organized as follows: after the introduction the experimental detail is described in Sec. 2. Section 3 is devoted to the results and discussion and the conclusion is presented in Sec. 4.

Al nanoparticles were produced by PLA of a Al plate (99.9%) in deionized water using the fundamental wavelength of a Nd:YAG laser operating at 1064 nm with pulse width of 7 ns and 10 Hz repetition rate. The

Al plate was cleaned ultrasonically in alcohol, acetone, and deionized water before the experiments. Aluminum bulk was placed on the bottom of deionized water contain with its surface at the focal point of a 80 mm convex lens. Height of deionized water on the aluminum target was 6 mm. Laser beam diameter was 2 mm before lens and was calculated to be 40 ^m on the surface of the target. The volume of the deionized water in the ablation contain was 20 ml and aluminum target was ablated with 500 laser pulses at different energies. Samples 1—5 were prepared with laser fluences of 1, 1.5, 2, 2.5, 3 J/cm2 respectively. Detail about the sample preparation is presented in Table. Sample 1 was almost colorless and the color of Al suspension was changed to opalescent from sample 2 to 4 as is shown in Fig. 1.

Optical absorption spectra of samples in a 10 mm path length quartz cells were measured by UV-Vis-NIR spectrophotometer from PG Instruments (T-80). DLS measurement was done using the Nano ZS (red badge) ZEN 3600 device from Malvern Co, for studying the size distribution of the nanoparticles in deionized water. X-ray diffraction was measured by X'pert Philips diffractometer with wavelength of CuKa. The suspensions were dried on Si substrates XRD measurement. To measure the ablation rate in the liquid medium, the target was weighed up before and after ablation process by an accurate Sartorius utensil model CP225D with 0.01 mg readability. After ablation inside water with 500 laser pulses, the target was dried and weighed up again. Hence, the mass loss of the target attributed to the amount of generated NPs could be measured. Also their morphology was studied by Leo 440i scanning electron microscopy (SEM) and transmission electron microscopy (TEM, Philips EM 208) was obtained by placing a drop of the concentrated suspension on a carbon-coated copper grid. To investigate the molecular bonds in the suspensions the

Fig. 2. Variation of the mass of the target during the ablation versus laser pulse fluence for 500 pulses.

In Fig. 1 the photo of samples are presented and in Fig. 2 the ablation mass of samples versus laser fluence is plotted. With increasing the laser fluence, the rate of ablation changes uniformly for each sample except sample 4. What we can say is that from sample 1 to 5 the rate of ablation is generally increased with increasing the laser fluence. Depending on nanoparticle size and concentration, the color of Al nanoparticle solution in deionized water can be varied from colorless to opalescent as it is shown in Fig. 1. Sample 1 is almost colorless which changes gradually to opalescent.

In Fig. 1 it is shown that the amount of Al nanoparticles is increased exponentially with increasing the laser pulse fluence. Furthermore, changing the color of samples can be due to their size. Size of nanoparticles is changed from sample 1 to 5. If color of suspension is very close