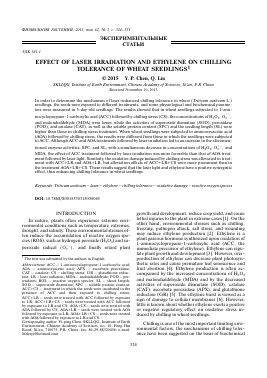 In order to determine the mechanism of laser-enhanced chilling tolerance in wheat (Triticum aestivum L.) seedlings, the seeds were exposed to different treatments, and some physiological and biochemical parameters were measured in 5-day-old seedlings. The results showed that in wheat seedlings subjected to 1-ami-

and malondialdehyde (MDA) were lower, while the activities of superoxide dismutase (SOD), peroxidase (POD), and catalase (CAT), as well as the soluble protein content (SPC) and the seedling length (SL) were higher than those in chilling stress treatment. When wheat seedlings were subjected to aminooxyacetic acid (AOA) followed by chilling stress, the results were different from those in which the seedlings were subjected to ACC. Although ACC and AOA treatments followed by laser irradiation led to an increase in the aforementioned enzyme activities, SPC, and SL, with a simultaneous decrease in concentrations of H2O2, O2 , and MDA, the effect of ACC treatment followed by laser irradiation was more favorable than that of AOA treatment followed by laser light. Similarly, the oxidative damage induced by chilling stress was alleviated in treatment with ACC+LR and AOA+LR, but alleviation effects of ACC+LR+CS were more prominent than in the treatment AOA+LR+CS. These results suggest that the laser light and ethylene have a positive synergistic effect, thus enhancing chilling tolerance in wheat seedlings.

1 The text was submitted by the authors in English.

growth and development, reduce crop yield, and cause lethal injuries to the plant in extreme cases [1]. On the other hand, environmental stresses such as chilling, freezing, pathogen attack, salt stress, and wounding may induce ethylene production [2]. Ethylene is a plant gaseous hormone synthesized upon oxidation of 1-aminocyclopropane-1-carboxylic acid (ACC, the immediate precursor of ethylene). Ethylene can regulate plant growth and development [3]. However, overproduction of ethylene can decrease plant photosyn-thetic rates and cause premature leaf senescence and fruit abortion [4]. Ethylene production is often accompanied by the increased concentrations of H2O2 and malondialdehyde (MDA) and by the decreased activities of superoxide dismutase (SOD), catalase (CAT), ascorbate peroxidase (APX), and glutathione reductase (GR) [5]. The ethylene burst is viewed as a sign of damage to cellular membranes [6]. However, little is known about whether ethylene exerts a positive or negative regulatory effect on oxidative stress induced by chilling in wheat seedlings.

Chilling is one of the most important limiting environmental factors; the mechanisms of chilling tolerance have been suggested on the basis of biochemical

and physiological studies. In 2000 Lee and Lee proposed that chilling stress could lead to ROS production and membrane damage [7], which finally suppresses photosynthesis and growth development [8]. In addition, ROS impair activities of antioxidant enzymes such as SOD, CAT, peroxidase (POD), and APX that protect the cells from oxidative damage [8]. Superoxide dismutase is a group of metalloenzymes that catalyze the disproportionation of superoxide to H2O2 and O2 and play an important role in protection against superoxide-derived oxidative stress in plant cells [9]. Ascorbate peroxidase catalyzes the reaction of ascorbic acid with H2O2, and GR catalyzes the regeneration of ascorbic acid [10]. Catalase is known to play a key role in protecting the cells against oxidative stress. Catalase is one of the main H2O2-scavenging enzymes; it decomposes H2O2 into H2O and O2 [11]. Peroxidases are enzymes that catalyze the H2O2-de-pendent oxidation of a wide variety of substrates, mainly phenols [12]. If ROS content overcomes the plant capacity of ROS scavenging under stress conditions, the balance of plant defensive system is disturbed and the growth and development is retarded. Therefore, agricultural scientists search for effective physical means to enhance plant tolerance to environmental stresses [13].

MDA, H2O2, ascorbate, O2- , POD, SOD, and CAT following laser irradiation at 650 nm; this treatment was found to protect wheat plants against UV-B radiation damage. Our previous research revealed that seedlings pretreated by irradiation of CO2 laser had lowered concentrations of MDA and oxidized glutathione while the activities of nitric oxide synthase, catalase, peroxidase, and superoxide dismutase increased, as well as the concentrations of nitric oxide and glutathione. The results showed that the pretreatment by CO2 laser can alleviate chilling-induced oxidative stress in plants [16]. However, little is known about the combined effects of ethylene and laser radiation on resistance ofwheat seedlings to chilling stress. We put forward a hypothesis that ethylene and laser irradiation provide a positive synergistic effect on chilling tolerance ofwheat seedlings. To test our hypothesis, we pretreated the seeds by laser irradiation, 1-aminocyclopropane-1-carboxylic acid (ACC, the immediate ethylene precursor in higher plants), and aminooxyacetic acid (AOA, an inhibitor of ethylene biosynthesis) and then subjected the seedlings to chilling stress; thereafter some physiological parameters (the concentrations of O2 and

H2O2, the activities of CAT, SOD, APX, and POD) and seedling growth state were measured. The main objective of this study was to explain the potential effect and the mechanisms of laser- and ethylene-medi-ated enhancement of plant tolerance to chilling stress.

Plant materials and treatments. Uniform-sized seeds of wheat (Triticum aestivum L. Xiaoyan no. 22, which were provided by Seed Company of Xi'an, Shaanxi province of China) were selected and surface-sterilized for 10 min in 0.05% HgCl2. They were then rinsed for 30 min in running water and air dried. To determine the synergistic effect and the mechanism by which laser radiation (LR) enhances physiological tolerance to chilling stress, the seeds were divided into ten groups and exposed to different treatments (see table for detailed description). After the treatments, each group was sown separately in Petri dishes (15 cm) with wet filter paper in growth chambers maintained at 26 ± ± 1°C, 70% relative humidity, and 380 ^mol/mol CO2 under dark conditions. Photosynthetically active radiation (PAR, 400 ^mol/(m2 s)) was provided with a 16/8 h light/dark period after seed germination. When the seedlings were 3-day-old, the seedling groups designated as CS, ACC+CS, ACC+LR+CS, AOA+CS, and AOA+LR+CS were exposed to chilling stress (4 ± ± 1°C) for 24 h and then maintained at 26 ± 1°C for 1 da