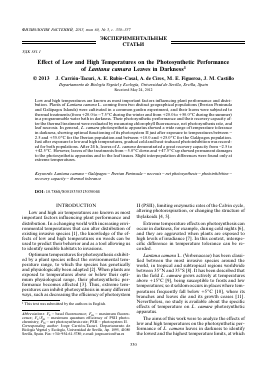 Low and high temperatures are known as most important factors influencing plant performance and distribution. Plants of Lantana camara L. coming from two distinct geographical populations (Iberian Peninsula and Galápagos Islands) were cultivated in a common garden experiment, and their leaves were subjected to thermal treatments (from +20.0 to —7.5°C during the winter and from +20.0 to +50.0°C during the summer) in a programmable water bath in darkness. Their photosynthetic performance and their recovery capacity after the thermal treatment were evaluated by measuring chlorophyll fluorescence, net photosynthesis rate, and leaf necrosis. In general, L. camara photosynthetic apparatus showed a wide range of temperature tolerance in darkness, showing optimal functioning of its photosystem II just after exposure to temperatures between -2.5 and +35.0°C for the Iberian population and between +10.0 and +25.0°C for the Galápagos population. Just after exposure to low and high temperatures, gradual cold and heat-induced photoinhibition was recorded for both populations. After 24 h, leaves of L. camara demonstrated a great recovery capacity from -2.5 to +42.5°C. However, leaves of the treatments from —5.0°C down and +47.5°C up showed permanent damages to the photosynthetic apparatus and to the leaf tissues. Slight interpopulation differences were found only at extreme temperatures.

Low and high air temperatures are known as most important factors influencing plant performance and distribution. In a changing world with increasing environmental temperatures that can alter distribution of existing invasive species [1], the knowledge of the effects of low and high temperatures on weeds can be used to predict their behavior and as a tool allowing us to identify sensible habitats to invasions.

Extreme temperature effects on photosynthesis can occur in darkness, for example, during cold nights [6], and they are aggravated when plants are exposed to high levels of irradiance [7]. In this context, interspecific difference in temperature tolerance can be recorded.

Lantana camara L. (Verbenaceae) has been classified between the most invasive species around the world, in tropical and subtropical regions worldwide between 35°N and 35°S [8]. It has been described that in the field L. camara grows actively at temperatures above +15°C [9], being susceptible to frosts and low temperatures; so it seldom occurs in places where temperatures frequently fall below +5°C [10], where its branches and leaves die and its growth ceases [11]. Nevertheless, no study is available about the specific effects of temperature on L. camara photosynthetic apparatus.

The aims of this work were to analyze the effects of low and high temperatures on the photosynthetic performance of L. camara leaves in darkness to identify the lowest and the highest temperature limits, at which

its leaves are able to resist during nighttime and to know if two populations of L. camara coming from contrasted latitudes show different response to temperature. With these aims, we evaluated in a common garden experiment the photosynthetic performance and the recovery capacity after high and low temperature treatments for L. camara plants coming from the Galápagos Archipelago and from the Southwest of Iberian Peninsula. We hypothesized: (1) the photosyn-thetic apparatus of L. camara would be sensible to temperature lower than +5°C, and (2) L. camara from the Iberian Peninsula would have a higher tolerance to extreme temperatures than the population from the Galápagos Islands since Iberian populations are exposed to more extreme temperatures during summer and winter than the Galápagos populations.

Plant material. Two wild Lantana camara L. populations were studied, one from the center of the latitudinal geographic distribution at the Galápagos Archipelago (from the Transition Zone (ca. 120 m above sea level) in Santa Cruz Island, 0°42' S; 90° 19' W) and another from the northern extreme of its geographic distribution at Southwest of Iberian Peninsula (Asperillo Sea Cliff, Huelva, 37°06' N; 6°46' W). At both locations, L. camara was originally coming from gardens, arriving in 1938 for first time in the Galápagos [12] and probably during the seventies or eighties after the construction of Parador de Mazagón in 1968 on the Asperillo Sea Cliff.

Seeds were collected from 10 plants chosen randomly in each population. 10 plants of each population were cultivated in plastic pots in peat soil at the open-air area of the greenhouse facilities of the University of Seville during 4 months.

on the 22nd June 2011, so the plants were acclimated to winter and summer conditions, respectively.

Leaves were placed individually in sealed plastic bags and immersed in a programmable water bath (Neslab RTE-200, "NESLAB Instr.", United States) for 30 min in darkness [15]. Ethylene glycol 30% (v/v) was used to avoid ice crystal formation in the water bath. Every leaf was immersed at the same time in the water bath at +20.0°C.

To assess the recovery capacity of the photosyn-thetic apparatus, leaves were kept in saturated humidity, +20°C and exposed to ca. 40 ^mol/(m2 s) during 24 h [15]; these conditions of low-light intensity favor the substitution of damaged proteins ofthe PSII. A period of milder temperatures is required to return to rates of photosynthesis as those prior to the extreme temperature event [6]. After the recovery period, necrosis percentage was measured as the proportion of the total leaf area. Chlorophyll a fluorescence fast dynamic and net photosynthesis rate were also recorded.

Chlorophyll fluorescence. Chlorophyll a fluorescence measurements were carried out in dark-adapted leaves (at least during 30 min) using a FMS-2 portable modulated fluorimeter ("Hansatech Instr.", United Kingdom) on the adaxial leaves surface. The minimal fluorescence level in the dark-adapted state (F0) was measured by using a modulate pulse (PPFD < 0.05 ^mol/(m2 s) for 1.8 ^s) too small to induce significant physiological changes in the pl