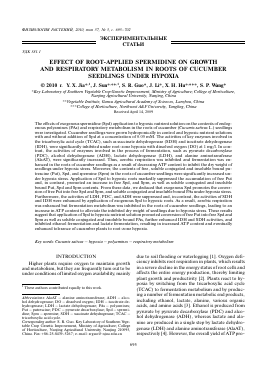 Higher plants require oxygen to maintain growth and metabolism, but they are frequently turn out to be under conditions of limited oxygen availability, mainly

1 These authors contributed equally to this work.

due to soil flooding or waterlogging [1]. Oxygen deficiency inhibits root respiration in plants, which results in a severe decline in the energy status of root cells and affects the entire energy production, thereby limiting plant growth and productivity [2]. Plants react to hy-poxia by switching from the tricarboxylic acid cycle (TCAC) to fermentation metabolism and by producing a number of fermentation metabolic end products, including ethanol, lactate, alanine, various organic acids, and amino acids [3]. Ethanol is produced from pyruvate by pyruvate decarboxylase (PDC) and alcohol dehydrogenase (ADH), whereas lactate and alanine are produced in a single step by lactate dehydro-genase (LDH) and alanine aminotransferase (AlaAT), respectively [4]. However, the overall yield ofATP pro-

duced during fermentation is only two molecules of ATP per glucose molecule, as compared to 36 molecules of ATP produced during oxidative phosphorylation; and lactate accumulation, which induces cytoplasmic acidification, has been considered to be one of the main causes ofhypoxia and anoxia injury to plants.

Polyamines (PAs) are ubiquitous aliphatic amines involved in regulating the plant growth and senescence. PAs in higher plants are triamine spermidine (Spd), tetraamine spermine (Spm), and diamine pu-trescine (Put: a precursor of Spd and Spm). PAs often exist in their free forms in the cells, but they can also be associated with small molecules, such as phenolic acids, to form soluble conjugates and with various macromolecules, like proteins and the cell wall, to form insoluble bound PAs. In recent years, the possible involvement of PAs in the plant defense response against various biotic and abiotic stresses has gained increasing attention [5]. Transgenic Arabidopsis thaliana plants overexpressing the SPDS gene encoding Spd synthase exhibited a significant increase in the Spd content in leaves together with an enhanced tolerance to multiple stresses, such as chilling, freezing, salinity, hyperosmosis, drought, and paraquat toxicity [6]. Under anaerobic conditions, an increase in the activities of enzymes involved in PAs biosynthesis as well as an increase in the level of endogenous free Put was observed; furthermore, elongation of Scirpus mu-cronatus shoots was also closely correlated with the accumulation of PAs. Increases in Put levels and S. mu-cronatus shoot elongation were inhibited by the addition of inhibitors of PAs biosynthesis, and these effects were reversed by the simultaneous addition of exogenous Put [7]. In addition, Nada et al. [8] found that Put pretreatment moderated lactate fermentation in the roots of tomato and alleviated the inhibition of root growth under hypoxia stress. Our primary experiment demonstrated that cucumber (Cucumis sativus L., cv. Zhongnong No. 8) was comparatively sensitive to hypoxia among 13 cucumber cultivars tested [9]. The addition of1.0 mM Put, 0.02 mM Spm (unpublished data), or 0.05 mM Spd [10] to the hypoxic nutrient solution could mitigate the injury induced by hypoxia stress; 0.05 mM Spd treatment had the most remarkable effect. However, the mechanism, by which PAs regulate hypoxia tolerance, is still not well understood. The present study was designed to further explore whether the mechanism of the PA-mediated increase in the root-zone hypoxia tolerance of cucumber plants involved regulation of respiratory metabolism in hy-poxic roots.

Plant materials and treatments. The seeds of cucumber plants (Cucumis sativus L., cv. Zhongnong No. 8) were germinated on a sheet of wet filter paper in the

dark at 28 ± 1°C. Germinated seeds were planted in quartz sand and, after the second leaf had expanded, uniformly grown seedlings were transplanted to troughs containing 65 l of full-strength Hoagland nutrient solution. The dissolved oxygen (DO) concentration in the solution was maintained between 6.0 to 8.0 mg/l by vigorous aeration with an air pump (ACO-004). The seedlings were cultured in an environment-controlled greenhouse under a 14-h photoperiod with a photo flux density of 310 |imol/(m2 s) at 27/l8°C (day/night). The relative humidity was 60—75%.

Spd was added to the nutrient solution before beginning hypoxia treatment. The DO level of 0.9—1.1 mg/l was regulated by bubbling O2 or N2 through the solution according to signals from the automatic DO control system (Quantum-25, "Quantum Analytical Instruments Inc.", United States). Root samples were collected for analysis at 0, 2, 4, 6, and 8 days after beginning of treatment with Spd and/or hypoxia. At 0, 2, 4, 6, 8, 10, 12, and 14 days after treatment, seedlings were harvested for determination of their dry weight.

Polyamine analysis. Root samples (about 1.0 g) were homogenized in 3.2 ml of cold 5% perchloric acid and incubated at 4°C for 1 h. 1,6-hexanediamine was added to the homogenate as the internal standard. The homogenate was then centrifuged at 12000 g for 30 min at 4°C. The supernatant was used to determine free and soluble conjugated PAs, and the pellet was used to determine insoluble bound PAs. Free, soluble conjugated and insoluble bound PAs were determined according to Duan et al. [11].