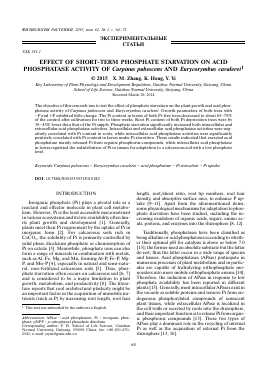 Inorganic phosphate (Pi) plays a pivotal role as a reactant and effector molecule in plant cell metabolism. However, Pi is the least accessible macronutrient in various ecosystems and its low availability often limits plant growth and development [1]. Generally, plants meet their Pi requirement by the uptake of Pi in inorganic form [2]. For calcareous soils rich in CaCO3, the solubility of Pi is primarily controlled by solid phase dicalcium phosphate or chemisorption of Pi on calcite [3]. Meanwhile, phosphate ions can also form a range of minerals in combination with metals, such as Al, Fe, Mg, and Mn, forming Al-P, Fe-P, Mg-P, and Mn-P [4], especially in natural and semi-natural, non-fertilized calcareous soils [5]. Thus, phosphate starvation often occurs on calcareous soil [6, 7] and is considered to be a major limitation to plant growth, metabolism, and productivity [8]. The literature reports that root architectural plasticity might be an important factor in the acquisition of immobile nutrients (such as P) by increasing root length, root hair

length, root/shoot ratio, root tip numbers, root hair density, and absorptive surface area, to enhance P uptake [9-11]. Apart from the aforementioned items, some physiological mechanisms for adaptation to phosphate starvation have been studied, including the increasing exudation of organic acids, sugars, amino acids, protons, and enzymes into the rhizosphere [8, 12].

Traditionally, phosphatases have been classified as being alkaline or acid phosphatases according to whether their optimal pH for catalysis is above or below 7.0 [13]; the former need an absolute substrate but the latter do not; thus the latter occur in a wide range of species and tissues. Acid phosphatases (APase) participate in numerous processes of plant metabolism and in particular are capable of hydrolyzing orthophosphate monoesters into more mobile orthophosphate anions [14]. Therefore, the induction of APase in response to low phosphate availability has been reported in different plants [15]. Generally, most intracellular APases exist in the vacuole as soluble proteins and remove Pi from endogenous phosphorylated compounds of senescent plant tissues, while extracellular APase is localized in the cell walls or secreted by roots into the rhizosphere, and their important function is to release Pi from organic phosphorus compounds [13]. These two types of APase play a dominant role in the recycling of internal Pi as well as the acquisition of external Pi from the rhizosphere [13, 16].

For plants growing on calcareous soil, researchers have reported some mechanisms for utilization of inorganic phosphate in these soil, such as enhancing the exudation of low-molecular weight organic acids by roots, symbiosis with mycorrhizal fungi and rhizo-sphere microorganisms [17]. Meanwhile, high APase activity in different plants on calcareous soil with low Pi availability has been reported [18]. However, other reports indicated that high APase activity did not result from low phosphate availability; thus, APase does not contribute to the uptake of Pi [19]. The changes in APase activity might be regulated by developmental factors (such as flowering and senescence), biochemical substance (ABA), and environmental factors (divalent cations, salt stress, and water deficit stress) [20, 21].

The objectives of this study were (1) to characterize acid phosphatase activity in Eurycorymbus cavalerei and Carpinus pubescens trees (naturally growing on calcareous soil with a low phosphate availability) cultivated hydroponically under Pi starvation, and (2) to test the effects of intracellular and extracellular acid phosphatase activities on the uptake and utilization of Pi from the rhizosphere by controlling Pi starvation in a hydroponic culture system. Such characteristics may be critical factors in understanding the mechanism for E. cavalerei and C. pubescens trees acclimating to calcareous soil, especially in karst topographies.

Plant materials and culturing conditions. Sterilized seeds of Eurycorymbus cavalerei and Carpinus pubescens were germinated in pots filled with sand containing 0.5-strength MS salts in an illumination incubator (SPX-150-GB) (25°C day and 20°C night temperature, 70 ± 5% relative humidity, 1000 ^mol/(m2 s) PAR, and a 14-h photoperiod) until experimental treatment. Uniformly sized seedlings were planted in polypropylene pots containing 500 mL of 0.5-strength MS salt solution without phosphate (-P) or with 2mM phosphate (+P, control) as KH2PO4, then placed in a plant growth incubator (HRR-1000K) (25°C day and 20°C night temperature, 80 ± 5% relative humidity, 1000 ^mol/(m2 s)PAR, and a 14-h photoperiod). The 0.5-strength MS salt solution was adjusted to pH 7.4 with NaOH and replaced every five days. All treated seedlings were arranged, in triplicates, in a completely randomized design. The seedlings of E. cavalerei and C. pubescens were cultivated for 1 week, 2 weeks, and 3 weeks, respectively.

stop the reaction, and the activity was measured by comparing the absorbance at 405 nm to the p-nitro-phenol standard curve [9].

Extracellular acid phosphatase activity assay. Roots were washed in distilled water, dried, and placed in a plastic cup containing 30 mL of substrate mixture (200 mM sodium acetate buffer (pH 5.0) with 6 mM p-nitrophenyl phosphate disodium (pNPP)), then incubated at room temperature for 90 min before the reaction was terminated. The activity was measured as described above [9].

Determination of inorganic phosphorus. Inorganic phosphate (Pi) was determined directly after homoge-nization and extraction of leaves or roots with cold 10% trichloroacetic acid using the method of Fiske and Subbarow [22].

Root, shoot length, and dry weight determination. Viable roots and shoots of plants were spread onto a glass plate without overlapping each other. Root and shoot lengths were measured by a leaf area scanner (CI-203 portable laser area meter, "CID Corporation", United States). Each sample was placed inside a pre-weighed Eppendorf tube and dried to constant weight at 65°C. The dry weights were determined by subtracting the weights of the tubes.

E. cavalerei and C. pubescens cultivated in both Pi-free and Pi-sufficient solutions for one to three weeks did not show significant differences in their root and shoot lengths, as well as in root and shoot dry weights (table).