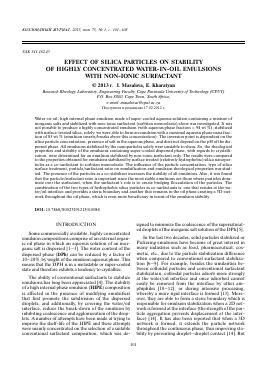 Water-in-oil, high internal phase emulsion made of super-cooled aqueous solution containing a mixture of inorganic salts and stabilized with non-ionic surfactant (sorbitan monooleate) alone was investigated. It was not possible to produce a highly concentrated emulsion (with aqueous phase fraction = 94 wt %), stabilized with surface-treated silica, solely: we were able to form an emulsion with a maximal aqueous phase mass fraction of 85 wt % (emulsion inverts/breaks above this concentration). The inversion point is dependent on the silica particle concentration, presence of salt in the aqueous phase, and does not depend on the pH of the dispersed phase. All emulsions stabilized by the nanoparticles solely were unstable to shear. So, the rheological properties and stability of the emulsions containing super-cooled dispersed phase, with regards to crystallization, were determined for an emulsion stabilized by non-ionic surfactant only. The results were compared to the properties obtained for emulsions stabilized by surface treated (relatively hydrophobic) silica nanopar-ticles as a co-surfactant to sorbitan monooleate. The influence of the particle concentration, type of silica surface treatment, particle/surfactant ratio on emulsification and emulsion rheological properties was studied. The presence of the particles as a co-stabilizer increases the stability of all emulsions. Also, it was found that the particle/surfactant ratio is important since the most stable emulsions are those where particles dominate over the surfactant, when the surfactant's role is to create bridging flocculation of the particles. The combination of the two types of hydrophobic silica particles as co-surfactants is: one that resides at the water/oil interface and provides a steric boundary and another that remains in the oil phase creating a 3D-net-work throughout the oil phase, which is even more beneficiary in terms of the emulsion stability.

Some commercially available, highly concentrated emulsion compositions comprise of an external organic oil phase in which an aqueous solution of an inorganic salt is dispersed [1—3]. The water content of the dispersed phase (DPh) can be reduced by a factor of 10—20%, by weight of the emulsion aqueous phase. This means that the DPH is in a metastable or super-cooled state and therefore exhibits a tendency to crystallize.

The ability of conventional surfactants to stabilize emulsions has long been appreciated [4]. The stability of a high internal phase emulsion (HIPE) composition is affected in the presence of modifying emulsifiers that first promote the subdivision of the dispersed droplets; and additionally, by covering the water/oil interface, reduce the break-down of the emulsion by inhibiting coalescence and agglomeration of the droplets. A number of attempts have been made at trying to improve the shelf-life of the HIPE and these attempts were mainly concentrated on the selection of a suitable conventional surfactant composition, which was de-

signed to minimize the coalescence of the supersaturated droplets of the inorganic salt solution of the DPh [5].

In the last two decades, solid particles stabilized or Pickering emulsions have become of great interest in many industries such as food, pharmaceutical, cosmetic, etc., due to the particle stabilization difference when compared to conventional surfactant stabilization [6—9]. For example, besides the similarities between colloidal particles and conventional surfactant stabilization, colloidal particles adsorb more strongly at the water/oil interface and once adsorbed cannot easily be removed from the interface by other am-phiphiles [10—12], or during intensive processing, whereby a more rigid interface is formed [13]. Moreover, they are able to form a steric boundary which is responsible for emulsion stabilization when a 2D network is formed at the interface (the strength of the particle aggregation prevents displacement at the interface) [14]. It has also been reported that when a 3D network is formed, it extends the particle network throughout the continuous phase, thus improving stability by preventing droplet—droplet contact [14]. But

despite such great interest, not much literature is available with regards to HIPEs or emulsions where the volume fraction exceeds the maximum packing fraction for monodispersed spheres, which are widely used in different industries. Moreover, it has been reported that it is not possible to form the Pickering emulsion with a DPh volume fraction higher than 0.71 [15—17].

The need has arisen to make use of the advantages associated with surfactant and particles stabilized emulsions in order to eliminate the disadvantages of their individual use as sole components and to produce stable HIPEs. Little or no interest has been given to the use of emulsions, where combinations of surfactants and particles are used, with regards to HIPEs [18—21]. However, it was deduced that there is an increase in the stability of oil-in-water emulsions when the mixed system is used [20, 13].

The study presented herein deals with water-in-oil HIPEs, where the DPh is a supersaturated aqueous solution of inorganic salts [22—24]. To better understand the role of the particles in stabilization of emulsions against the aqueous phase crystallization, the emulsion formation refinement time to form an emulsion with constant droplet size as well as the rheological properties were determined, in order to compare them with the properties of emulsions stabilized by non-ionic emulsifiers solely.

The oil used was industrial grade hydrocarbon oil that had a density of 0.795 kg/L (at 20°C), a kinematic viscosity of 2.9 cSt (at 40°C), an aromatic content of 8% and a flash point of 98°C. Deionized water, purified with "Milli-Q" system, was used in all the experiments. The lipophilic nonionic surfactant sorbitan monooleate (SMO) that was used was supplied by Lake International Co. (Republic of South Africa). The chemical structure of SMO is presented in Fig. 1. The particles used are fumed silica of the CAB-O-SIL® range (CAB-O-SIL® TS 610 and CAB-O-SIL® TS 720) from CABOT Corp. (USA). They consist of aggregates (0.2—0.3 ^m) obtained by fusion of primary spheres (sphere surface area 105—140 m2/g) by hydrogen bonding between hydroxyl groups. The silica nanoparticles belong to treated type particles where the amphiphility depends on the type and degree of treatment. The treatment replaces some of the hy-droxyls on the surface of the silica thus resulting in increased hydrophobicity. Both particles used in this study are lipophilic, where CAB-O-SIL® TS 610 is less lipophilic than CAB-O-SIL® TS 720. The structure of the silica particles used for the investigation is presented in Fig. 2.

The emulsion was prepared using a solution of surfactants in hydrocarbon oil and aqueous solution of inorganic salts. Water comprises app. 20% by weight of the solution. The crystallisation temperature (fudge point) of the inorganic salt solution is app. 59°C. The density of the aqueous solution is 1.4 to 1.5 kg/L. The oil phase mass fraction is kept at 6% of the total mass of the emulsions that were investigated. The oil phase was prepared by mixing the emulsifier and/or nano-particles with hydrocarbon oil by means of an Ultra Turrax T25 stirrer (Jannke&Kuntel, Germany) at 3000 rpm for 15 min at ambient temperature. For the preparation of the emulsion DPh, a mixture of granulated inorganic salts was dissolved in water at a temperature of 80°C. The concentration of the salts in the aqueous solution was kept at 80 wt % and controlled by the fudge point. To prepare emulsion samples, the Hobart mixing technique was used. The emulsion was made at 80°C by the incorporation of the aqueous phase into the oil phase. After complete addition of the

aqueous phase, the stirring was maintained for different periods of time, but at the same speed of agitator, in order to prepare the samples with the same droplet sizes but different oil phase content. The emulsion was stored at ambient temperature. In order to study the effect of silica nanoparticles on the stability of water-in-oil emulsions, the emulsion was prepared by slowly adding a known amount of 60 wt % aqueous solution of inorganic salts to the oil phase, while mixing the system using the Ultra Turrax T25 stirrer at 3000 rpm at ambient temperature.

Droplet size determination. The droplet size distributions were measured using a Malvern Mastersizer 2000 instrument. The procedure is based on sample dispersion under software control and the measurement of angle dependence of the intensity of scattering of a collimated He-Ne laser beam. The particle size distribution calculations are based on the rigorous Mie theory and using the standard software applied to the instrument. The sample was diluted in the oil of the continuous phase just before the measurements were taken.

Rheology. The basic rheological measurements were carried out with the use of a rotational dynamic rheometer MCR 300 (Paar Physica). The geometry of the measuring unit