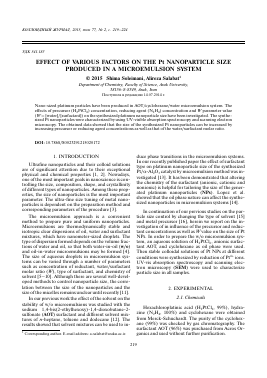 Nano-sized platinum particles have been produced in AOT/cyclohexane/water microemulsion system. The effects of precursor (H2PtCl6) concentration, reducing agent (N2H4) concentration and W parameter value (W = [water]/[surfactant]) on the synthesized platinum nanoparticle size have been investigated. The synthesized Pt nanoparticles were characterized by using UV-visible absorption spectroscopy and scanning electron microscopy. The obtained data showed that the size of the synthesized Pt nanoparticles can be increased by increasing precursor or reducing agent concentrations as well as that of the water/surfactant molar ratio.

Ultrafine nanoparticles and their colloid solutions are of significant attention due to their exceptional physical and chemical properties [1, 2]. Nowadays, one of the most important goals in nanoscience is controlling the size, composition, shape, and crystallinity of different types of nanoparticles. Among these properties, the size of nanoparticles is the most important parameter. The ultra-fine size tuning of metal nano-particles is dependent on the preparation method and corresponding parameters of the procedure [3].

The microemulsion approach is a convenient method to prepare pure and uniform nanoparticles. Microemulsions are thermodynamically stable and isotropic clear dispersions of oil, water and surfactant mixtures, which have nanometer-sized droplets. The type of dispersion formed depends on the volume fractions of water and oil, so that both water-in-oil (w/o) and oil-in-water microemulsions may be formed [4]. The size of aqueous droplets in microemulsion systems can be varied through a number of parameters such as concentration of reductant, water/surfactant molar ratio (W), type of surfactant, and chemistry of solvent [5—10]. Although there are several well-developed methods to control nanoparticle size, the correlation between the size of the nanoparticles and the size of the micelles remains unclear until recently [11].

In our previous work the effect of the solvent on the stability of w/o microemulsions was studied with the sodium 1,4-bis(2-ethylhexoxy)-1,4-dioxobutane-2-sulfonate (AOT) surfactant and different solvent mixtures of «-heptane, toluene and dodecane [12]. The results showed that solvent mixtures can be used to in-

duce phase transitions in the microemulsion systems. In our recently published paper the effect of surfactant type on platinum nanoparticle size of the synthesized Pt/a-Al2O3 catalyst by microemulsion method was investigated [13]. It has been demonstrated that altering the chemistry of the surfactant (anionic, cationic and nonionic) is helpful for tailoring the size of the generated platinum nanoparticles (NPs). Lopez et al. showed that the oil phase nature can affect the synthesized nanoparticles in microemulsion systems [14].

In continuation of our previous studies on the particle size control by changing the type of solvent [15] and metal precursor [16], herein we report on the investigation of in influence of the precursor and reductant concentrations as well as Wvalue on the size of Pt NPs. In order to prepare the w/o microemulsion system, an aqueous solution of H2PtCl6, anionic surfactant AOT, and cyclohexane as oil phase were used. Then stable colloidal solutions of Pt NPs at different conditions were synthesized by reduction of Pt4+ ions. UV-vis absorption spectroscopy and scanning electron microscopy (SEM) were used to characterize particle size in all samples.

Hexachloroplatinic acid (H2PtCl6, 99%), hydrazine (N2H4, 100%) and cyclohexane were obtained from Merck-Schuchardt. The purity of the cyclohexane (99%) was checked by gas chromatography. The surfactant AOT (96%) was purchased from Acros Or-ganics and used without further purification.

Colloidal suspension of metallic nanoparticles of platinum was prepared in w/o microemulsion containing cyclohexane as the continuous oil phase and AOT as a surfactant. A certain amount of aqueous H2PtCl6 was added to the 0.12 M surfactant solution in cyclohexane. When the mixture was equilibrated after 3 hours of stirring, the complete reduction of platinum was carried out by slow addition of N2H4 within 2 h under stirring. UV-visible spectroscopy was used to monitor the formation of Pt NPs at various conditions.

The morphology, optical properties and size of Pt NPs were determined by using Specord S600 JENA AG spectrophotometer and SEM Philips XL30 microscope. Samples for SEM analysis were sonicated for 20 min, and then the droplets were transferred to an aluminum plate and dried at room temperature.

3.1. Effect of initial concentration of H2PtCl6 on Pt nanoparticle size

In this study the H2PtCl6 was used as a precursor for preparation of platinum nanoparticles. The effect of initial concentration on the size of synthesized Pt nanoparticles is shown in Fig. 1. The H2PtCl6 concentrations in microemulsion system with a constant W value were 0.01, 0.025, 0.05 and 0.075 M, respectively; all systems contained constant amount of AOT. Mi-croemulsions with concentration of H2PtCl6 more than 0.075 M were not transparent at 25°C. After reducing the microemulsions by adding N2H4, the UV-vis absorption spectra of the prepared Pt colloid systems were measured and plotted in Fig. 1. Upon an increase of H2PtCl6 concentration from 0.01 to 0.075 M, the

optical absorption of surface plasmons (SP) of the prepared Pt nanoparticles' increased and the position of SP band red-shifted from 340.2 to 346.2 nm. The observed effect implies that the size and number of Pt nanoparticles increase with an initial concentration of the precursor. This inference was corroborated by SEM images (Fig. 2), which demonstrate the increase of the average diameter of platinum nanoparticles from 10 to 75 nm upon increasing H2PtCl6 concentration from 0.010 to 0.075 M, respectively.

Based on the mechanism proposed by Bagwe et al. [17], the mechanism of the exchange of solubilizates, reaction and subsequent growing can be present in five main steps: (1) Brownian diffusion of reverse micelles leading to collisions; (2) surfactant layer opening through effective collisions and a coalescence of the micelles; (3) diffusion of solubilizate molecules resulting in the exchange of material between micelles; (4) reaction of solubilizate molecules resulting in formation of metallic nuclei; (5) the aggregates splitting to form reverse micelles. Considering our experimental results, this mechanism suggests that the nucleation and growth proceed simultaneously. The aggregation step is, however, essential for the growth of the nanoparticles, and the increase of the precursor concentration can reasonably enhance the amount of nuclei as well as the probability of aggregation.

respectively. A change in color from pale to dark yellow due to the formation of Pt nanoparticles was observed after the mixing two microemulsions. The UV-visible absorption spectra of the as-prepared Pt colloid for different concentrations of reductant are shown in Fig. 3. As illustrated by the spectra, the SP band shifted toward longer wavelengths when the N2H4 concentration increased. The red shift of the absorption band, which is associated with the reduction of plasmon frequency, implies an increase in the Pt particle size. Figure 3 shows that the locations of SP band at the wavelengths of 341.4, 343.3, 349.7 and 353.2 nm correspond to molar ratios of N2H4 to H2PtCl6 of 3 : 1, 5 : 1, 7 : 1 and 10 : 1, respectively. For high molar ratio of 3 : 1 the absorption peak of Pt NPs is broad and located at shorter wavelength. For higher N2H4 concentration, the absorption peak is narrowed and shifts toward longer wavelength. This dependence suggests that the platinum nuclei aggregate into larger particles. Moreover, the intensity of SP band increased with