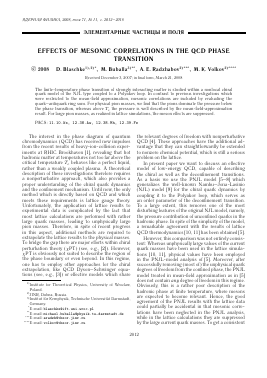 EFFECTS OF MESONIC CORRELATIONS IN THE QCD PHASE

The finite-temperature phase transition of strongly interacting matter is studied within a nonlocal chiral quark model of the NJL type coupled to a Polyakov loop. In contrast to previous investigations which were restricted to the mean-field approximation, mesonic correlations are included by evaluating the quark—antiquark ring sum. For physical pion masses, we find that the pions dominate the pressure below the phase transition, whereas above Tc the pressure is well described by the mean-field-approximation result. For large pion masses, as realized in lattice simulations, the meson effects are suppressed.

The interest in the phase diagram of quantum chromodynamics (QCD) has received new impulses from the recent results of heavy-ion-collision experiments at RHIC Brookhaven [1], revealing that hot hadronic matter at temperatures not too far above the critical temperature Tc behaves like a perfect liquid, rather than a weakly coupled plasma. A theoretical description of these investigations therefore requires a nonperturbative approach, which also provides a proper understanding of the chiral quark dynamics and the confinement mechanism. Until now, the only method which is directly based on QCD and which meets these requirements is lattice gauge theory. Unfortunately, the application of lattice results to experimental data is complicated by the fact that most lattice calculations are performed with rather large quark masses, leading to unphysically large pion masses. Therefore, in spite of recent progress in this aspect, additional methods are required to extrapolate the lattice results to the physical masses. To bridge the gap there are major efforts within chiral perturbation theory (xPT) (see, e.g., [2]). However, %PT is obviously not suited to describe the region of the phase boundary or even beyond. In this regime, one has to employ other approaches for the chiral extrapolation, like QCD Dyson—Schwinger equations (see, e.g., [3]) or effective models which share

the relevant degrees of freedom with nonperturbative QCD [4]. These approaches have the additional advantage that they can straightforwardly be extended to nonzero chemical potential, which is still a serious problem on the lattice.

In present paper we want to discuss an effective model of low-energy QCD, capable of describing the chiral as well as the deconfinement transitions. As a basis we use the PNJL model [5—8] which generalizes the well-known Nambu—Jona-Lasinio (NJL) model [9] for the chiral quark dynamics by coupling it to the Polyakov loop, which serves as an order parameter of the deconfinement transition. To a large extent, this removes one of the most disturbing features of the original NJL model, namely, the pressure contribution of unconfined quarks in the hadronic phase. In spite of the simplicity of the model, a remarkable agreement with the results of lattice QCD thermodynamics [10, 11] has been obtained [5].

However, this comparison was not entirely consistent: Whereas unphysically large values of the current quark masses have been used in the lattice simulations [10, 11], physical values have been employed in the PNJL-model analysis of [5]. Moreover, after successfully removing (most of) the unphysical quark degrees of freedom from the confined phase, the PNJL model treated in mean-field approximation as in [5] does not contain any degree of freedom in this regime. Obviously, this is a rather poor description of the hadronic phase at finite temperature, where mesons are expected to become relevant. Hence, the good agreement of the PNJL results with the lattice data could partially be accidental in that mesonic correlations have been neglected in the PNJL analysis, while in the lattice calculations they are suppressed by the large current quark masses. To get a consistent

picture it is thus important to go beyond the mean-field approximation and to include mesonic correlations. This can be done systematically within the framework of a 1/Nc-expansion scheme [12], which has successfully been applied to the NJL model, e.g., in [13].

In the present work we suggest a 1/Nc improvement of the PNJL model which is necessary to disentangle hadronic contributions in the vicinity of and below the chiral/deconfinement phase transition. Moreover, the existence of bound states above Tc may be crucial for the understanding of the properties of the strongly coupled quark—gluon plasma [14]. A consistent inclusion of hadron-gas contributions should thus include the dissociation of hadrons being bound states of quarks and antiquarks below the transition into resonant continuum correlations somewhere above it. This hadronic Mott transition [15] has been discussed first in [16] and was formulated within the NJL model in [17] employing the concept of spectral functions and in-medium scattering-phase shifts within a Bethe—Uhlenbeck approach, see [18].

In the present paper, we restrict ourselves to the case of zero chemical potential. The central quantity for our analysis is then the thermodynamic potential at finite temperature which can be written as a sum of a mean-field part and a part which describes the mesonic correlations:

As usual, we have introduced an irrelevant constant Q0, which is chosen such that Q(0) = 0. Technically, the correlation part Qcorr(T) corresponds to a ring sum of quark—antiquark loops (see [17, 19]). For the evaluation of (1), we consider a nonlocal generalization of the PNJL model. The nonlocal four-point interaction is chosen in a separable form motivated by the instanton-liquid model (ILM) [20], where it results from the internal nonlocal structure of the nonperturbative QCD vacuum. In the ILM, the nonlocality is represented by the profile function of the quark zero mode in the instanton field and depends on the gauge. We use a Gaussian ansatz as one of the simplest functional forms of the nonlocality which has a similar behavior as the zero-mode profile obtained in a gauge invariant manner [21]. This choice guarantees convergence at all orders without an additional regularization procedure.

where mc is the current quark mass, and Dp = = dp — iAp is the covariant derivative with a background gluon field Ap = ApXa/2 = 5p0A0. The nonlocal quark currents are

To proceed, we single out the nonzero mean-field value of the scalar field by the decomposition a = = a + amf so that na and a denote only the fluctuating parts of the fields ((na) = (a) = 0) describing mesonic correlations. The scalar mean field gives a dynamical contribution to the quark mass which in Euclidean momentum space is M(p2) = mc + + mdf2(p2) with f2(p2) = exp(-p2/A2) being the (Fourier transformed) Gaussian form factor in Euclidean space. The amplitude md = — amf is an order parameter for dynamical chiral-symmetry breaking. The model parameters of the quark sector are fixed by using the pion mass and the weak pion-decay constant and choosing a chiral condensate value in accordance with the limits from QCD sum-rule analyses. The chiral condensate is obtained from the non-perturbative part of the quark propagator, Snp(p) = = (p + M(p2))-1 — (p/ + mc)-1, i.e., after subtracting the perturbative part. For details see, e.g., [22, 23]. For the analyses in the present paper, we employ a parameter set from [22] for — (qq)1/3 = 240 MeV given by mc = 5.8 MeV, A = 902.4 MeV, and GA2 = = 15.82.

Due to the coupling to the Polyakov loop the fermionic Matsubara frequencies un = (2n + 1)7rT are shifted:

For the Polyakov-loop potential U($, $) we adopt the logarithmic form of [8], which has been fitted to the quenched lattice data of [24].

The order parameters (mean-field values for md and 03) are obtained by minimization of the mean-field part of the thermodynamic potential dQmffdma = 0, dQmf/d03 = 0.

In Fig. 1 we show the resulting temperature dependence of