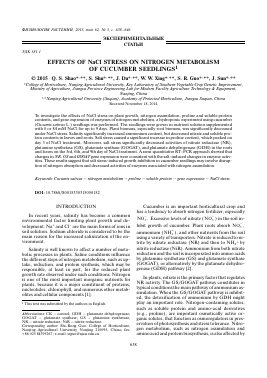 EFFECTS OF NaCl STRESS ON NITROGEN METABOLISM OF CUCUMBER SEEDLINGS1

To investigate the effects of NaCl stress on plant growth, nitrogen assimilation, proline and soluble protein contents, and gene expression of enzymes of nitrogen metabolism, a hydroponic experiment using cucumber (Cucumis sativus L.) seedlings was performed. The seedlings were grown in nutrient solution supplemented with 0 or 84 mM NaCl for up to 9 days. Plant biomass, especially root biomass, was significantly decreased under NaCl stress. Salinity significantly increased ammonium content, but decreased nitrate and soluble protein contents in leaves and roots. Salt stress caused a significant increase in proline content, which peaked on day 3 of NaCl treatment. Moreover, salt stress significantly decreased activities of nitrate reductase (NR), glutamine synthetase (GS), glutamate synthase (GOGAT), and glutamate dehydrogenase (GDH) in the roots and leaves on the 3rd, 6th, and 9th day of NaCl treatment. A semi-quantitative RT-PCR approach showed that changes in NR, GS and GOGAT gene expression were consistent with the salt-induced changes in enzyme activities. These results suggest that salt stress-induced growth inhibition in cucumber seedlings may involve disruption of nitrogen absorption and decreased activities of enzymes associated with nitrogen assimilation.

In recent years, salinity has become a common environmental factor limiting plant growth and development. Na+ and Cl— are the main forms of ions in soil solution. Sodium chloride is considered to be the main reason for the increased salinization of the environment.

Salinity is well known to affect a number of metabolic processes in plants. Saline conditions influence the different steps of nitrogen metabolism, such as uptake, reduction, and protein synthesis, which may be responsible, at least in part, for the reduced plant growth rate observed under such conditions. Nitrogen is one of the most important inorganic nutrients for plants, because it is a major constituent of proteins, nucleotides, chlorophyll, and numerous other metabolites and cellular components [1].

Cucumber is an important horticultural crop and has a tendency to absorb nitrogen fertilizer, especially NO3. Excessive levels of nitrate (NO3 ) in the soil inhibit growth of cucumber. Plant roots absorb NO—,

ammonium (NH+ ), and other nutrients from the soil using a variety of transporters. Nitrate is reduced to nitrite by nitrate reductase (NR) and then to NH4+ by nitrite reductase (NiR). Ammonium from both nitrate reduction and the soil is incorporated into amino acids by glutamine synthetase (GS) and glutamate synthase (GOGAT), or alternatively by the glutamate dehydrogenase (GDH) pathway [2].

In plants, nitrate is the primary factor that regulates NR activity. The GS/GOGAT pathway constitutes in typical conditions the main pathway of ammonium assimilation. When the GS/GOGAT pathway is inhibited, the detoxification of ammonium by GDH might play an important role. Nitrogen-containing solutes, such as soluble protein and amino-acid derivatives (e.g., proline), are important osmotically active organic solutes, that function as osmoregulators in preservation of photosynthesis and stress tolerance. Nitrogen metabolism, such as nitrogen assimilation and amino acid and protein biosynthesis, is also affected by

abiotic stress. Changes in the activities of key enzymes associated with nitrogen metabolism, including NR, GS, GOGAT, and GDH, and contents of nitrogen-containing solutes under Ca(NO3)2 stress are reported in tomato [3], cucumber [4], and watermelon [5].

Cucumber (Cucumissativus L., 'Jinchun No. 2') seeds were obtained from the Tianjin Kernel Cucumber Research Institute, Tianjin, China. Seeds were germinated on filter paper in Petri dishes in the dark at 29 ± 1 °C for approximately 24 h, then they were sown in the sand and moved to a plastic greenhouse. After full development of the second leaf, the seedlings were transplanted into plastic containers containing half-strength Hoagland's nutrient solution (pH 6.5 ± 0.1, electrical conductivity 2.0—2.2 dS/m) containing 4mM Ca(NO3)2 • 4H2O, 6 mM KNO3, 1 mM NH4H2PO4, and 2 mM MgSO4 • 7H2O; microelements were supplied as 46.25 |M H3BO3, 9.54 |M MnSO4 • 4H2O, 0.77 |M ZnSO4 • 7H2O, 0.32 |M CuSO4 • 5H2O, 0.016 |M (NH4)6Mo7O24 • 4H2O, and 80.81 |M Na-Fe-EDTA. The nutrient solution was aerated using an air pump at an interval of 20 min to maintain a dissolved oxygen concentration of 8.0 ± ± 0.2 mg/L during the experiment. The concentration of NaCl applied was selected in accordance with the results of a previous experiment [6]. Each experimental unit consisted of eight plants. The treatments were arranged in a randomized complete-block design with three replicates per treatment. After pre-culturing for 3 days in half-strength Hoagland solution, the following treatments were applied: 0 mM NaCl (CK; control) and 84 mM NaCl.

In order to prevent salt stimulation, the NaCl concentration in the nutrient solution was increased sequentially in 42 mM increments on two successive days. All physiological and biochemical parameters were examined after 0, 3, 6, and 9 days of salt treatment. Morphological parameters were recorded after treatment for 9 days. The third leaf above the cotyledons and the roots were used for analysis. The seedling containers were arranged in a randomized complete block design.

Morphological analysis. After 9 days of salt treatment, the seedlings were sampled for measurement of plant height, stem thickness, and root length. Leaves and roots were washed with deionized water, blotted

dry, and the fresh weight was measured. After determining the fresh weight, the leaves and roots were placed in a forced air oven at 105°C for 15 min, then dried at 70°C for 72 h and the dry weight was recorded. The total area of fully expanded leaves was measured using an Expression 1680 scanner ("Epson", Australia) and analyzed with WinRHIZO ("Regent Instruments Ltd.", Canada).

Proline content. Fresh samples (0.5 g) of leaves and roots were homogenized in 3% (w/v) 5-sulphosalicylic acid. The homogenate was filtered through filter paper in accordance with the method of Bates et al. [12]. After addition of acid ninhydrin and glacial acetic acid, the mixture was heated at 100°C for 1 h in a water bath. The reaction was stopped by placing the test tubes in ice-cold water. The mixture was extracted with toluene. After aspiration of the toluene from the aqueous phase, the absorbance was read at 520 nm. The proline content was determined using a calibration curve.

Soluble protein content assay. Leaf samples (0.5 g) and root samples (1.5 g) frozen at —80°C were homogenized on ice, respectively, in 1.2 and 1.0 mL of 30 mM Tris—HCl extraction buffer (pH 8.7), containing 0.7 M sucrose, 1 mM EDTA-Na2, 1 mM DTT, 1 mM PMSF, 1 mM ASA, and 1 mM MgCl2 • 6H2O. The homogenate was centrifuged at 12000 g for 15 min at 4°C. The supernatant was centrifuged again under the same conditions. The protein in the final supernatant was quantified in accordance with the method of Bradford [13] using bovine serum albumin as the standard.

RNA isolation and semi-quantitative RT-PCR analysis. Total RNA was extracted from leaves and roots with the TRIzol reagent following the manufacturer's protocol ("Takara Bio Inc.", Japan). For all samples, total RNA (1 |g) was converted to cDNA using a Superscript first-strand synthesis system for RT-PCR in accordance with the manufacturer's instructions ("Takara Bio Inc."). Primers were designed on the basis of sequences in the National Center for Biotechnology Information database (http://www.ncbi. nlm.nih.gov/) and the Cucumber Genome database (http://cucumber.genomics.org.cn). PCR was carried out after denaturing the cDNA at 94°C for 5 min, fol-