научная статья по теме EFFECTS OF NITRATE AND AMMONIUM ON GROWTH OF ARABIDOPSIS THALIANA PLANTS TRANSFORMED WITH THE ARR5::GUS CONSTRUCT AND A ROLE FOR CYTOKININS IN SUPPRESSION OF DISTURBANCES INDUCED BY THE PRESENCE OF AMMONIUM Биология 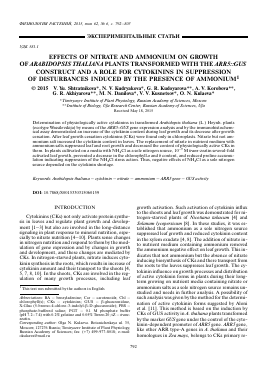 Текст научной статьи на тему «EFFECTS OF NITRATE AND AMMONIUM ON GROWTH OF ARABIDOPSIS THALIANA PLANTS TRANSFORMED WITH THE ARR5::GUS CONSTRUCT AND A ROLE FOR CYTOKININS IN SUPPRESSION OF DISTURBANCES INDUCED BY THE PRESENCE OF AMMONIUM»

EFFECTS OF NITRATE AND AMMONIUM ON GROWTH OF ARABIDOPSIS THALIANA PLANTS TRANSFORMED WITH THE ARR5::GUS CONSTRUCT AND A ROLE FOR CYTOKININS IN SUPPRESSION OF DISTURBANCES INDUCED BY THE PRESENCE OF AMMONIUM1

Determination of physiologically active cytokinins in transformed Arabidopsis thaliana (L.) Heynh. plants (ecotype Wassilevskija) by means of the ARR5::GUS gene expression analysis and by the immunohistochem-ical assay demonstrated an increase of the cytokinin content during leaf growth and its decrease after growth cessation. After leaf growth cessation cytokinins (CKs) were found only in chloroplasts. Nitrate but not ammonium salt increased the cytokinin content in leaves. The replacement of nitrate in nutrient medium with ammonium salts suppressed leaf and root growth and decreased the content of physiologically active CKs in them. In plants cultivated on a media with NH4Cl as a sole nitrogen source, 10-9 M trans-zeatin several-fold activated leaf growth, prevented a decrease in the chlorophyll a and b content, and reduced proline accumulation indicating suppression of the NH4Cl stress action. Thus, negative effects of NH4Cl as a sole nitrogen source depended on the cytokinin shortage.

Cytokinins (CKs) not only activate protein synthesis in leaves and regulate plant growth and development [1—3] but also are involved in the long-distance signaling in plant response to mineral nutrition, especially to nitrate nutrition [4—10]. Plants sense changes in nitrogen nutrition and respond to them by the modulation of gene expression and by changes in growth and development, and these changes are mediated by CKs. In nitrogen-starved plants, nitrate induces cytokinin synthesis in the roots, which results in increase of cytokinin amount and their transport to the shoots [4, 5, 7, 8, 10]. In the shoots, CKs are involved in the regulation of many growth processes, including leaf

growth activation. Such activation of cytokinin influx to the shoots and leaf growth was demonstrated for nitrogen-starved plants of Nicotiana tabacum [4] and Solanum lycopersicum [8]. In these studies, it was established that ammonium as a sole nitrogen source suppressed leaf growth and reduced cytokinin content in the xylem exudate [4, 8]. The addition of nitrate into nutrient medium containing ammonium removed the ammonium negative effect on leaf growth. This indicates that not ammonium but the absence of nitrate inducing biosynthesis of CKs and there transport from the roots to the leaves suppresses leaf growth. The cytokinin influence on growth processes and distribution of active cytokinin forms in plants during their long-term growing on nutrient media containing nitrate or ammonium salts as a sole nitrogen source remains unstudied and needs in further analysis. A possibility of such analysis was given by the method for the determination of active cytokinin forms suggested by Aloni et al. [11]. This method is based on the induction by CKs of GUS activity in A. thaliana plants transformed by the marker GUS gene under the control of the cyto-kinin-dependent promoter of ARR5 gene. ARR5 gene, like other ARR type-A genes in A. thaliana and their homologues in Zea mays, belongs to CKs primary re-

sponse genes [12, 13]. The cytokinins rapidly and highly specifically induce the expression of these genes. This allowed Aloni et al. [11] to suggest an approach for the analysis of distribution of active cytoki-nin forms in plants on the basis of induction by these CKs of GUS gene under the control of cytokinin-de-pendent promoter of ARR5 gene [11]. A great advantage of this approach is that it allows the obtaining of information about distribution in plants of only functionally active CKs, without their inactive transport and storage forms. In addition, this method permits avoiding of cytokinin isolation and purification. For successful application of this method, it is necessary that the entire chain of events from cytokinin perception by the receptor histidine protein kinase to signal transduction via the phosphate cascade to the nucleus and induction of type-A ARR genes (ARR5 gene is among them) should be active [14]. As it was shown by Aloni et al. [11], these condition settings were satisfied in A. thaliana plants transformed with the ARR5::GUS construct, because a distribution pattern of GUS activity in plant tissues corresponded in this work to endogenous cytokinin localization determined by im-munocytochemistry. The method was further confirmed in our experiments, when treatment with highly active cytokinin BA of detached leaves of A. thaliana plants transformed with the ARR5::GUS construct resulted in the increase of GUS activity in them proportional to the logarithm of the used BA concentration [15, 16]. This allowed us to use the approach suggested by Aloni et al. [11] for the solution of following tasks: to study the effects of mineral nitrogen forms and their concentrations in nutrient medium on the growth of A. thaliana plants transformed with the ARR5::GUS construct and on the distribution in these plants of active cytokinin forms on the basis of a distribution pattern of GUS activity. Besides, the aim of this work was to elucidate whether disturbances in plant growth on medium containing ammonium salts as a sole nitrogen source were related to the shortage of CKs and could be rescued by cytokinin treatment.

Seeds were sterilized and placed in Petri dishes on agar-solidified (0.7% agar) 0.5-strength Murasige and Skoog nutrient medium or its modification. The seeds were incubated for three days at 4°C to synchronize germination. Nutrient medium modification was the adding to 0.5-strength MS the following sole nitrogen sources: 2 or 20 mM KNO3, 1 or 10 mM NH4NO3,

1 or 10 mM (NH4)2SO4. All media were supplemented with 1% sucrose; their pH was maintained at the level of 5.7—6.0 by the addition of MES-buffer. Plants were further grown on these media for 4 weeks in the climate-controlled chamber at the illumination of 120 ^mol photons/(m2 s), a temperature of 23°C, and a 16-h photoperiod. The sampling was performed twice a week.

In experiments with cytokinin treatment of plants grown on 0.5-strength MS medium with 2 mM NH4Cl as a sole nitrogen source, 10-10—10-6 M trans-zeatin (tZ) was added to medium.

GUS activity assay. GUS activity was determined by two methods: (1) fluorimetric analysis of GUS activity as described in [18]; (2) revealing GUS activity using X-Gluc (5-bromo-4-chloro-3-indolyl-P-D-glucuronide), as described in [19]. Thereafter, plants were photographed, these photographs colored in blue due to the GUS reaction were transformed in black-and-white 8-bit images, and staining intensity was quantified by using ImageJ software (USA). The results are presented in arbitrary units (0—255) obtained by the computer graphics system HSV representing average color intensity per unit area. The leaf and cotyledon areas, petiole and root lengths were measured on plant photographs using ImageJ software.

Cytokinin immunolocalization. For zeatin immu-nolocalization, the A. thaliana leaves of different age were fixed for 24 h in 4% paraformaldehyde ("Riedel-de Haen", Germany) and 0.1% glutaraldehyde ("Sigma", Germany) in phosphate buffer. The samples were washed for 1 h with phosphate-buffered saline (PBS). The materials were dehydrated with serial eth-anol dilutions (20, 50, 70, 80, and 96%); tissues were stored for 30 min in each dilution. Then, samples were mounted in GB4 methacrylate resin ("Electron Microscopy Sciences", USA). The 1.5 ^m histological sections were cut with therotation microtome (HM 325, "MICROM Laborgerate", Germany). The hormone immunolocalization was performed as described in [20]. The sections were covered with 50 ^L of 0.1 M phosphate buffer (pH 7.2-7.4) with 0.2% gelatine and 0.05% Tween 20 (PGT) and incubated for 30 min in a moist chamber. The serum and gold conjugates were diluted with PGT. Sections washed with distilled water were incubated with immune serum to CKs for 2 h in a moist chamber. Control sections were treated with rabbit non-immuneserum. To visualize serum binding with zeatin, sections were treated with gold conjugate ("BBInt", United Kingdom) for 1 h in a moist chamber. After three washes with PGT, samples were incubated with silver enhancer ("BBInt") for 15-20 min in darkness and examined with a light microscope. The silver excess was removed with distilled water. The preparations were