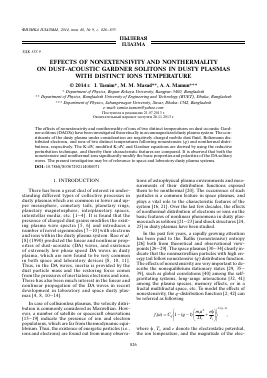 The effects of nonextensivity and nonthermality of ions of two distinct temperatures on dust-acoustic Gardner solitons (DAGSs) have been investigated theoretically in an unmagnetized dusty plasma system. The constituents of the dusty plasma under consideration are negatively charged mobile dust fluid, Boltzmann distributed electrons, and ions of two distinct temperatures following nonextensive (q) and nonthermal distributions, respectively. The K-dV, modified K-dV, and Gardner equations are derived by using the reductive perturbation technique, and thereby their characteristic features are compared. It is observed that both the nonextensive and nonthermal ions significantly modify the basic properties and polarities of the DA solitary waves. The present investigation may be of relevance to space and laboratory dusty plasma systems.

There has been a great deal of interest in understanding different types of collective processes in dusty plasmas which are common in lower and upper mesosphere, cometary tails, planetary rings, planetary magnetosphere, interplanetary spaces, interstellar media, etc. [1—4]. It is found that the presence of charged dust grains modifies the existing plasma wave spectra [5, 6] and introduces a number of novel eigenmodes [7—10] with electrons and ions within the dusty plasma system. Rao et al. [8] (1990) predicted the linear and nonlinear properties of dust-acoustic (DA) waves, and existence of extremely low phase speed DA waves in dusty plasma, which are now found to be very common in both space and laboratory devices [8, 10, 11]. Thus, in the DA waves, inertia is provided by the dust particle mass and the restoring force comes from the pressures of inertialess electrons and ions. There has also been much interest in the linear and nonlinear propagation of the DA waves in recent development in laboratory and space dusty plasmas [4, 8, 10-14].

In case of collisionless plasmas, the velocity distribution is commonly considered as Maxwellian. However, a number of satellite or spacecraft observations [15-19] indicate the presence of ion and electron populations, which are far from thermodynamic equilibrium. Thus, the existence of energetic particles (i.e., ions and electrons) are found out from many observa-

tions of astrophysical plasma environments and measurements of their distribution functions exposed them to be nonthermal [20]. The occurrence of such particles is a common feature in space plasmas, and plays a vital role to the characteristic features of the system [16, 21]. Over the last few decades, the effects of nonthermal distribution of electrons or ions on the basic features of nonlinear phenomena in dusty plasmas such as solitons [21-23] and shock structures [24, 25] in dusty plasmas have been studied.

In the past few years, a rapidly growing attention has been paid to the Tsallis (nonextensive) entropy [26] both from theoretical and observational viewpoints [26-29]. The space plasmas [30-34] clearly indicate that the nonmaxwellian particles with high energy tail follow nonextensive (q) distribution function. The effects of nonextensivity are very important to describe the nonequilibrium stationary states [29, 3539], such as global correlations [40] among the self-gravitating systems, long-range interactions [32, 41] among the plasma species, memory effects, or in a fractal multifractal space, etc. To model the effects of nonextensivity, the q-distribution function [2, 42] can be referred as following

where ^, T, and e denote the electrostatic potential, the ion temperature, and the magnitude of the elec-

tron charge, respectively and mt is the ion mass. Here, q characterizes the degree of nonextensivity of the considered system. The normalization constants [2, 35] can be denoted by

here r stands for the standard gamma function. It is notable that in case of q < -1, the q-distribution is not normalizable [2]. The strength of nonextensivity, q varies as -1 < q < 1 [2]. Furthermore, for q > 1, [2, 35, 36] the ion distribution function exhibits Max-well—Boltzmann velocity distribution.

Many authors have investigated dust-acoustic solitary waves (DASWs) [43—52]. These investigations [43—52] are limited to either Maxwellian or nonthermal ions of single temperature, and effects of nonextensivity of ions are neglected there.

Tribeche and Merriche [35] have found out the effects of ion nonextensivity on DASWs. Yasmin et al. [36] have also investigated the properties of nonlinear waves in a dusty plasma consisting of q-distributed electrons. Recently, Sahu and Tribeche [37] have analyzed the solitary and shock waves in a dusty plasma associated with the nonextensive ions. But these works [35—39] are limited to either nonextensive electrons or ions of single temperature plasma system. However, the plasma species (i.e., electrons or ions) can exist in the space plasmas at distinct temperatures [16, 53— 55]. Nowadays, study on the effects of distinct temperatures of plasma species on linear and nonlinear waves in dusty plasma systems [24, 56—60] has become very important. According to Yu and Luo [61], it is incorrect to employ multispecies models for identical particles to construct quasistationary nonlinear structures (such as waves, solitons, double layers, shocks, vortices, etc.), unless the particles of the "different" species actually occupy different regions of the phase space. So, this is a prerequisite for defining the macroscopic thermodynamic quantities (viz. the temperatures) of the different species. In 2012, Masud et al. [62] have studied on dust-ion-acoustic Gardner Solitons (DIA GSs) with bi-Maxwellian electrons. In 2013, Akhter et al. [63] have investigated DIA GSs with two temperature electrons (maxwellian cold electrons and non-thermal hot electrons) in a dusty plasma system. In the models [62, 63], dynamics of dust was not considered. Last year, Asaduzzaman and Mamun [64] have studied on the DA GSs in dusty plasmas with two-temperature ions following Boltzmann distributions each. Moreover, a number of authors, e.g., Zhang and Wang [59], Zhou et al. [60] have considered the effect of distinct

[67] have analyzed the characteristics of DA solitons associated with two types of ions, i.e., vortex-like and nonthermal ion distributions in a dusty plasma system. Recently, Dorranian and Sabetkar [65] have studied the properties of DA solitons considering a dusty plasma system containing two nonthermal ion species at different temperatures deriving the Kadomtsev— Petviashivili (KP) equation. But, in all the above mentioned cases [24, 59, 60, 64—67], the combined effects of nonextensivity [29, 35—37] and nonthermality [16, 21, 24, 66] of ions at distinct temperatures on DASWs were not discussed at all. Therefore, interest has grown up in investigating the basic features of a dusty plasma system containing two temperature ions following nonextensive and nonthermal distributions, respectively by deriving higher order nonlinear equation, viz. standard Gardner (sG) equation and its solution.

In this paper, the properties of DASWs in an un-magnetized quasi-neutral dusty plasma containing extremely massive negatively charged mobile dust particles, Boltzmann distributed electrons, and ions of two distinct temperatures are studied, where the lower (or cold) temperature ions follow nonextensive distribution and higher (or hot) temperature ions follow nonthermal distribution. Therefore, the objective of our present investigation is to study the electrostatic solitary structures, observed in various cosmic dust-laden plasmas, such as Saturn's E-ring [24], Saturn's F-ring [35], noctilucent clouds, Halley's comet, interstellar molecular clouds in cosmic dust-laden plasmas [55], in a solar active region [16], laboratory dusty plasmas [59], etc. where two-temperature ions [24, 57, 64—66] can dominate the wave dynamics. In this manuscript, we have derived the K-dV, mK-dV and sG equations, and analyzed the SW solution, and then have shown how Gardner solution differs from the K-dV and mK-dV solutions.

The manuscript is organized as follows: The basic equations governing the plasma model under investigation are provided in Sec. 2. The K-dV, mK-dV, and sG equations are derived in Sec. 3, 4, and 5, respectively. The numerical SW solutions of Gardner equation are presented in Sec. 6. Finally, a brief discussion is given in Sec 7.

electrons, and ions of two distinct temperatures where lower