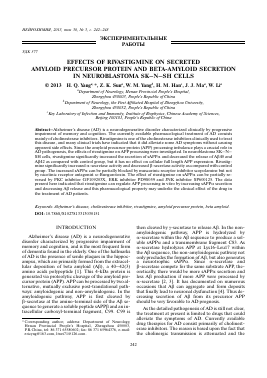 Abstract—Alzheimer's disease (AD) is a neurodegenerative disorder characterized clinically by progressive impairment of memory and cognition. The currently available pharmacological treatment of AD consists mainly of cholinesterase inhibitors. Rivastigmine is one of the cholinesterase inhibitors clinically used to treat this disease, and many clinical trials have indicated that it did alleviate some AD symptoms without causing apparent side effects. Since the amyloid precursor protein (APP) processing imbalance plays a crucial role in AD pathogenesis, the effects of rivastigmine on APP processing were investigated. In neuroblastoma SK-N-SH cells, rivastigmine significantly increased the secretion of sAPPa and decreased the release of AP40 and AP42 as compared with control group, but it has no effect on cellular full length APP expression. Rivastigmine significantly increased a-secretase activity and decreased P-secretase activity as compared with control group. The increased sAPPa can be partially blocked by muscarinic receptor inhibitor scopolamine but not by nicotinic receptor antagonist a-Bungarotoxin. The effect of rivastigmine on sAPPa can be partially reversed by PKC inhibitor GF109203X, ERK inhibitor PD98059 and JNK inhibitor SP600125. The data present here indicated that rivastigmine can regulate APP processing in vitro by increasing sAPPa secretion and decreasing AP release and this pharmacological property may underlie the clinical effect of the drug in the treatment of AD patients.

Alzheimer's disease (AD) is a neurodegenerative disorder characterized by progressive impairment of memory and cognition, and is the most frequent form of dementia found in the elderly. One of the hallmarks of AD is the presence of senile plaques in the hippocampus, which are primarily formed from the extracellular deposition of beta amyloid (AP), a 40—42(3) amino acids polypeptide [1]. This 4-kDa protein is generated via proteolytic cleavage of the amyloid precursor protein (APP). APP can be processed by two alternative, mutually exclusive post-translational pathways: amyloidogenic and non-amyloidogenic. In the amyloidogenic pathway, APP is first cleaved by P-secretase at the amino-terminal side of the AP sequence to generate a soluble peptide sAPPp and an intracellular carboxyl-terminal fragment, C99. C99 is

then cleaved by y-secretase to release Ap. In the non-amyloidogenic pathway, APP is hydrolyzed by a-secretase within the Ap sequence to produce a soluble sAPPa and a transmembrane fragment C83. As a-secretase hydrolyzes APP at Lys16-Leu17 within the Ap sequence, the non-amyloidogenic pathway not only precludes the formation of Ap, but also generates a neurotrophic sAPPa. Since a-secretase and P-secretase compete for the same substrate APP, theoretically, there would be more sAPPa secretion and less Ap production if more APP were processed by a-secretase [2, 3]. It has documented on numerous occasions that Ap can aggregate and form deposits that finally lead to neuronal dysfunction [4]. Thus decreasing secretion of Ap from its precursor APP should be very favorable to AD prognosis.

As the detailed pathogenesis of AD is still not clear, the treatment at present is limited to drugs that could alleviate the symptoms of AD. Currently available drug therapies for AD consist primarily of cholinest-erase inhibitors. The reason is based upon the fact that the cholinergic transmission is attenuated and the

It has been reported that stimulation of Ml and M3 muscarinic receptors increased the release of sAPPa and decreased the secretion of Ap [5]. Since then the effects of "cholinergic effect" of some cholinesterase inhibitors on APP metabolism have been extensively investigated. Shaw reported that phenserine could decrease the expression of APP, the secretion of sAPPa and Ap release [6]. Treatment of SH-SY5Y cells with metrifonate and dichlorvos increased the production of sAPPa without affecting cellular APP expression [7]. Huperzine A increased sAPPa release in human embryonic kidney 293 Swedish mutant cells [8]. Recent work in our team showed that PMS777, a new cholinesterase inhibitor with anti-platelet activated factor activity, could decrease sAPPa secretion and Ap42 release without affecting full-length APP expression [9]. Zimmermann indicated that donepezil could decrease Ap secretion and increase sAPPa release [10]. The data implied that although all these cholinesterase inhibitors could delay the degradation of acetylcholine and thus compensate the attenuated cholinergic transmission in the synapse, their effects on APP processing were different. That is, their effects on APP processing may beyond those mediated by the cholinergic system.

Rivastigmine is a dual acetyl- and butyrylcholinest-erase inhibitor approved by the FDA for the treatment of AD. Clinical trials have indicated that it did alleviate some of the cognitive and noncognitive symptoms of AD patients [11, 12]. A recent study showed that ri-vastigmine increased sAPPa secretion and decreased Ap release [13]. Although this effect mirrors synaptic protein, the detailed mechanism is unclear. As APP processing represents a crucial step in the pathogenesis in AD development, we further investigated the detailed mechanisms that underline after rivastigmine administration. We investigated the effect of rivastig-mine on some of the pathogenetic pathways leading to neurodegeneration in AD, i.e. APP expression and Ap secretion, and its effects on a- and p-secretase activities. The involvement of cholinergic activity and the possible signaling pathways which regulating APP processing were also investigated here.

Twenty micrograms of protein mixed with 5x loading buffer (0.313 M Tris-HCl (pH 6.8) at 25°C, 10% SDS, 0.05% bromophenol blue, 50% glycerol) and 20x reducing agent (2 M DTT) (Fermentas, Hanover, MD) was boiled for 5 min and loaded onto a 7.5% SDS-polyacrylamide electrophoresis gel(PAGE). After electrophoresis, the protein was electrophoretically transferred to polyvinylidene difluoride (PVDF) membranes (Bio-Rad, Hercules, CA). The membranes were saturated with 5% non-fat milk and incubated with primary antibodies (1 : 3000 for 6E10, 1 : 2500 for 22C11, and 1 : 10000 for p-actin) at 4°C overnight. After being washed 30 min in tris-buffered saline (TBS) with gentle agitation, the membranes were incubated with biotinylated anti-mouse/rabbit IgG secondary antibodies (Vector Laboratories, Burl-ingame, CA) in non-fat milk at room temperature for 1 h. The membranes were challenged with ABC agent (Vector Laboratories). After washing, the signals were developed with ECL advanced Western Blotting Detection kit (Amersham, UK). Band intensities we