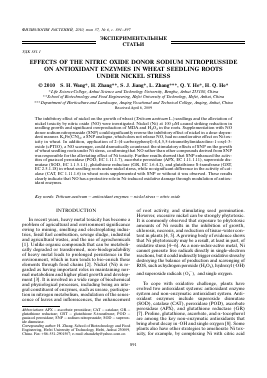 The inhibitory effect of nickel on the growth of wheat (Triticum aestivum L.) seedlings and the alleviation of nickel toxicity by nitric oxide (NO) were investigated. Nickel (Ni) at 100 цМ caused striking reduction in seedling growth and significant overproduction of MDA and H2O2 in the roots. Supplementation with NO donor sodium nitroprusside (SNP) could significantly reverse the inhibitory effect of nickel in a dose-dependent manner. K3Fe(CN)6, a SNP analogue, which does not release NO, had no ameliorative effect on Ni toxicity in wheat. In addition, application of 2-(4-carboxyphenyl)-4,4,5,5-tetramethylimidazoline-1-oxyl-3-oxide (cPTIO), a NO scavenger, could dramatically counteract the stimulatory effects of SNP on the growth of wheat seedling roots under Ni stress, confirming that NO rather than other compounds derived from SNP was responsible for the alleviating effect of Ni toxicity. Further results showed that SNP enhanced the activities of guaiacol peroxidase (POD, EC 1.11.1.7), ascorbate peroxidase (APX, EC 1.11.1.11), superoxide dis-mutase (SOD, EC 1.1.5.1.1), glutathione reductase (GR, EC 1.6.4.2), and glutathione S-transferase (GST, EC 2.5.1.18) in wheat seedling roots under nickel stress, while no significant difference in the activity of cat-alase (CAT, EC 1.11.1.6) in wheat roots supplemented with SNP or without it was observed. These results clearly indicate that NO has a protective role in Ni-induced oxidative damage through modulation of antiox-idant enzymes.

In recent years, heavy metal toxicity has become a problem of agricultural and environment significance owing to mining, smelting and electroplating industries, fossil fuel combustion, sewage sludge, industrial and agricultural wastes, and the use of agrochemicals [1]. Unlike organic compounds that can be metaboli-cally degraded or transformed, non-biodegradability of heavy metal leads to prolonged persistence in the environment, which in turn tends to bio-enrich these elements through food chains [2]. Nickel (Ni) is regarded as having important roles in maintaining normal metabolism and higher plant growth and development [3]. It is involved in a wide range of biochemical and physiological processes, including being an integral constituent of enzymes, such as urease, participation in nitrogen metabolism, modulation of the senescence of leaves and inflorescences, the enhancement

of root activity, and stimulating seed germination. However, excessive nickel can be strongly phytotoxic. It is commonly observed that exposure to phytotoxic amounts of Ni results in the inhibition of growth, chlorosis, necrosis, and reduction of tissue-water content in plants [4, 5]. A growing body of evidence shows that Ni phytotoxicity may be a result, at least in part, of oxidative stress [4—6]. As a non-redox-active metal, Ni cannot generate free radicals directly in single-electron reactions, but it could indirectly trigger oxidative stress by destroying the balance of production and scavenging of ROS, such as hydrogen peroxide (H2O2), hydroxyl (OH)

and histidine and by accumulation of Ni in vacuoles, cell walls, and epidermal trichomes [4]. However, these strategies can only partially mitigate Ni-induced toxicity, and the improvement of plant resistance to Ni toxicity has been a research goal.

Nitric oxide (NO) was firstly identified as a signal molecule participating in diverse physiological processes in animals [9]. Accumulating evidence suggests that NO participates in a wide range of plant growth and development processes. As a developmental regulator, NO promotes germination, leaf extension, and root growth, delays leaf senescence and fruit maturation, and also modulates cellulose synthesis in tomato roots [10, 11]. In addition, NO exhibits a protective role in plants exposed to a wide range of biotic and abiotic stresses. Exogenous NO can alleviate oxidative stress due to salt, methylviologen herbicides, and heavy metals by modulating the activities of antioxi-dant enzymes or by scavenging ROS directly [12—15]. For example, NO stimulated seed germination and counteracted the inhibitory effect of cadmium, lead, and salinity on root growth in Lupinus luteus by increasing SOD activity and scavenging the superoxide anion [14]. NO also reduced Al toxicity by preventing oxidative stress in the roots of Cassia tora [16]. Tewari et al. [17] reported that reduction of excess copper-induced toxicity by sodium nitroprusside (SNP), a NO donor, was mediated through the enhancement of the activities of SOD, CAT, APX, POD, and GR. More recently, exogenous NO was found to enhance the an-tioxidant capacity of wheat seedlings under Al stress [18]. However, there are fewer reports on the protective effect of NO against nickel-induced toxicity in plants.

The objective of this study was to investigate the potential capability of NO to serve as an antioxidant agent in wheat roots undergoing oxidative stress induced by excessive nickel. The results can offer implications to crop productivity in nickel-contaminated land and provide evidence for the involvement of NO in alleviating nickel-induced oxidative stress in wheat seedlings.

Wheat (Triticum aestivum L., cv. Yangmai 158) seeds were kindly supplied by Jiangsu Academy of Agricultural Sciences, China. Wheat seeds were sterilized with 5% NaClO for 5 min, then washed several times with distilled water and germinated for 3 days in the dark on a floating plastic net. After germination, similar young seedlings were selected and transferred to polyethylene containers with half-strength Hoagland nutrient solution for further experiments. In this report, sodium nitroprusside (SNP, (Na2Fe(CN)5)NO, "Sigma", United States) was used as NO donor and 2- (4-carboxyphenyl)-4,4,5,5-tetramethylimidazoline-1 -oxyl-3-oxide (cPTIO, "Sigma") was used as NO scavenger. Also, K3Fe(CN)6 ("Sigma") was used as a con-

trol for SNP decomposition, or analogue, which does not release NO.

To investigate the toxic effect of Ni, seedlings with three fully expanded leaves were transferred to half-strength Hoagland solutions containing 0, 50, 100, 200, or 400 |M NiCl2 and cultivated at 22 ± 1°C in darkness and at 28 ± 1°C in the light of 3 klx (12/12 h) for 4 days. On the 4th day, root biomass and the MDA and H2O2 content in roots were assayed. To examine the protective role of NO in Ni-induced stress, seedlings were cultivated on half-strength Hoagland solutions containing SNP at 0, 50, 100, 200, 400, or 800 | M with or without Ni at various concentrations. The pH of culture media and treatment solutions was adjusted to 5.5, and treatment solutions were renewed every other day.

The activities of superoxide dismutase (SOD), gua-iacol peroxidase (POD), ascorbate peroxidase (APX), and catalase (CAT) were analyzed using methods described previously [19]. Roots were homogenized in 100 mM K-phosphate buffer (pH 7.8) containing 0.1 mM EDTA and 1% PVP at 4°C, except that in the case of APX, roots were homogenized in 100 mM Na-phosphate buffer (pH 7.0) containing 5 mM ascorbate and 1 mM EDTA. The homogenate was centrifuged at 12000 g for 20 min at 4°C, and the supernatant was collected and stored at —80°C for determination of antioxidant enzyme activities. Protein content in the enzyme extract was measured with BSA as a standard. APX activity was determined in the presence of 0.5 mM ascorbate and 0.5 mM H2O2 by monitoring a decrease in absorbance at 290 nm. The analysis of POD was based on the oxidation of guaiacol by monitoring an increase in absorbance at 470 nm. CAT activity was determined spectrophotometrically by recording a decrease in absorbance at 240 nm. SOD activity was assayed by measurement of its capacity to inhibit the photochemical reduction of nitroblue tet-razolium. The absorbance of the solution was measured at 560 nm. GR and GST activities were assayed as described in [20]. The analysis of GR was based on the reduction of oxidized glutathione by monitoring the increase in absorbance at 412 nm. GST activity was measured using 1-chloro-2,4-dinitrobenzene as a substrate by recording an increase in absorbance at 340 nm. The contents of MDA, H2O2, and protein were determined according to the methods described in [19].