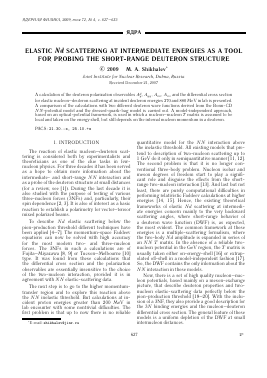 A calculation of the deuteron polarization observables Ady, Ayy, Axx, Axz and the differential cross section for elastic nucleon—deuteron scattering at incident deuteron energies 270 and 880 MeV in lab is presented. A comparison of the calculations with two different deuteron wave functions derived from the Bonn-CD NN-potential model and the dressed-quark-bag model is carried out. A model-independent approach, based on an optical-potential framework, is used in which a nucleon—nucleon T matrix is assumed to be local and taken on the energy shell, but still depends on the internal nucleon momentum in a deuteron.

The reaction of elastic nucleon—deuteron scattering is considered both by experimentalists and theoreticians as one of the clue tasks in few-nucleon physics. For three decades it has been served as a hope to obtain more information about the intermediate- and short-range NN interaction and as a probe of the deuteron structure at small distances (for a review, see [1]). During the last decade it is also studied with the purpose of testing of various three-nucleon forces (3nFs) and, particularly, their spin dependence [2, 3]. It is also of interest as a basic reaction to establish a polarimetry for vector—tensor mixed polarized beams.

To describe Nd elastic scattering below the pion-production threshold different techniques have been applied [4—7]. The momentum-space Faddeev equations can now be solved with high accuracy for the most modern two- and three-nucleon forces. The 3NFs in such a calculations are of Fujita—Miyazawa [8, 9] or Tucson—Melbourne [10] type. It was found from these calculations that the differential cross section and the polarization observables are essentially insensitive to the choice of the two-nucleon interaction, provided it is in agreement with NN elastic-scattering data.

The next step is to go to the higher momentum-transfer region and to explore this reaction above the NN inelastic threshold. But calculations at incident proton energies greater than 200 MeV in lab encounter with some nontrivial difficulties. The first problem is that up to now there is no reliable

quantitative model for the NN interaction above the inelastic threshold. All existing models that pretend to description of two-nucleon scattering up to 1 GeV do it only in semiquantitative manner [11, 12]. The second problem is that it is no longer conventional three-body problem. Nucleon isobar and meson degrees of freedom start to play a significant role and disguise the effects from the short-range two-nucleon interaction [13]. And last but not least, there are purely computational difficulties in performing relativistic Faddeev calculations at higher energies [14, 15]. Hence, the existing theoretical frameworks of elastic Nd scattering at intermediate energies concern mainly to the very backward scattering angles, where short-range behavior of a deuteron wave function (DWF) is, as expected, the most evident. The common framework at these energies is a multiple-scattering formalism, where the two-body Nd amplitude is expanded in series of an NN T matrix. In the absence of a reliable two-nucleon potential in the GeV region, the T matrix is usually taken either on-energy-shell [16] or extrapolated off-shell in a model-independent fashion [17]. So, the DWF contains the only information about the NN interaction in these models.

Now, there is a set of high quality nucleon—nucleon potentials, based mainly on a meson-exchange picture, that describe deuteron properties and two-nucleon elastic-scattering data perfectly below the pion-production threshold [18—20]. With the inclusion of a 3NF, they also provide a good description for the 3N binding energies and the nucleon—deuteron differential cross section. The general feature of these models is a uniform depletion of the DWF at small internucleon distances.

In the last two decades, numerous attempts have been made to describe the intermediate- and short-range NN interaction by methods of QCD [21—25]. The advantages of the quark models are that only a few physically meaningful parameters can be used to describe processes involving hadrons and a possibility to take the underlying symmetries of QCD directly into account. Most of these attempts focused only on elastic NN scattering at rather low energies and/or on low partial waves and are not suitable as input in few-body calculations. However, some of the features of a few-nucleon system, derived within the frameworks, can be further explored and tested. Especially it concerns the short-range behavior of the deuteron and 3N bound states. One of the successful models based on six-quark (6q) symmetries is a dressed-bag model (DBM) proposed recently [25, 26]. The essence of this model lies in different dynamics of the quark configurations \s4p2 [42]xL = 0,2), \s3p3 [33]xL = = 1,3) and the most symmetric ones \s6 [6]xL = = 0), Is'p1 [51]xL = 1). Whereas the first two configurations have a cluster structure and are projected mainly on the NN channel, the third and fourth configurations have the structure of a quark bag with a large weight of the AA and CC (hidden-color) states. As a result, the deuteron and 3N wave functions have a short-range node, which result from the orthogonality of the cluster wave function and the wave function of the 6q compound state. These 6q-symmetry arguments are also the foundations for the Moscow NN-potential model [27, 28]. In the framework of the DBM, it turned out to be possible to fit very reasonably the NN phase shifts in 1S0 and 3S1—3D1 channels up to 1 GeV and the deuteron static properties as well. As to the 3N systems, this model could explain quantitatively all static properties of 3He and 3H ground states, including a precise parameter-free description of the Coulomb displacement energy of3He—3H and all the charge distributions in these nuclei [29, 30].

In this work, elastic Nd scattering is considered as a possible discriminative tool between calculations with two different kinds of a DWF. The first one is derived from the Bonn-CD NN potential [20] and diminishes uniformly with approaching the internu-cleon distance to zero. The second one is a result of the DBM [25] and develops a nodal behavior. The framework is based on an optical-potential formalism. A multiple-scattering expansion is used to derive the optical potential that comprises of the one-nucleon-exchange (ONE) mechanism, the single-and double-scattering terms. As shown by Fad-deev calculations, at energies below about 200 MeV rescattering of higher order is very important, however around 300 MeV the first two terms in the

expansion are sufficient to describe the total Nd cross section [31]. For the NN input, a model-independent approach is used in which the nucleon—nucleon T matrix is assumed to be local and taken on-shell, but in contrast to the common impulse approximation it still depends on the internal nucleon momentum. Thus, the two-nucleon amplitude cannot be factor-ized out of an integral and some kinematical off-shell effects are implicitly taken into account.

The deuteron vector and tensor analyzing powers and the differential cross section are calculated for two deuteron kinetic energies Ed in lab — 270 and 880 MeV. At Ed = 270 MeV a comparison with precise data measured at RIKEN [32] is performed to validate the model. At this energy the difference between the calculations with the two kinds of a DWF is, as expected, not remarkable. The calculation at 880 MeV is performed in view of the recent experiment at JINR [33], in which the deuteron polarization observables were measured in the region of the so-called cross-section minimum (0c.m. = 70°—140°), where both vector and tensor analyzing powers can have large values.

The structure of the paper is as follows. In Section 2, the formalism of the optical potential and multiple-series expansion is briefly given. The approximation to the fully off-shell NN T matrix is developed and the Nd-scattering amplitude is defined. Section 3 is devoted to the results of the calculation and their discussion. Conclusion summarizes the contents of the work.

The basic equations for a three-body system in quantum physics are Faddeev equations which can be written in the operator form [1]:

where U = U^N(q', q) is an amplitude of elastic Nd scattering, q (q') is initial (final) relative momentum in the nucleon—deuteron c.m., ¡id,^N are spin quantum numbers, T is NN-scattering T matrix, Go = (E — H0 + ie)-1 is a free propagator of the 3N system and P = P12P23 + P13P23 stands for a permutation operator that takes into account the property of identity of three nucleons.

One can rewrite (1) in the form that is more appropriate for calculations at higher energies where a multiple-scattering expansion is justified [34]:

Here, Tc is a NN T matrix without the deuteron pole term and Gd is a deuteron contribution in the spectral decomposition of the two-body Hamiltonian.

Although Eq. (2) seems quite simple and represents a common two-body scattering equation, the derivation of the optical potential from Eq. (3) is as difficult as solving the Faddeev equations themselves. However, one can employ a multiple-scattering expansion of Vopt, keeping a p