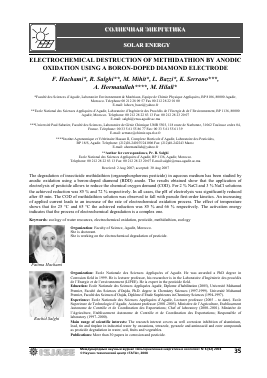 The degradation of insecticide methidathion (organophosphorous pesticide) in aqueous medium has been studied by anodic oxidation using a boron-doped diamond (BDD) anode. The results obtained show that the application of electrolysis of pesticide allows to reduce the chemical oxygen demand (COD). For 2 % NaCl and 3 % NaCl solutions the achieved reduction was 85 % and 72 % respectively. In all cases, the pH of electrolysis was significantly reduced after 45 min. The COD of methidathion solution was observed to fall with pseudo first-order kinetics. An increasing of applied current leads to an increase of the rate of electrochemical oxidation process. The effect of temperature shows that for 25 °C and 65 °C the achieved reduction was 85 % and 66 % respectively. The activation energy indicates that the process of electrochemical degradation is a complex one.

Organization: Faculty of Science, Agadir, Morocco. She is doctorant.

She is working on the electrochemical degradation of pesticide.

Organization: Ecole Nationale des Sciences Appliquées of Agadir. He was awarded a PhD degree in Corrosion field in 1999. He is lecturer professor, his researcher is in the Laboratoire d'Ingénierie des procédés de l'Energie et de l'environnement (LIPEE). He is expert in the pesticide field.

Main range of scientific interests: The research interest covers as well corrosion inhibition of aluminium, lead, tin and tinplate in industrial water by oxoanions, tetrazole, pyrazole and aminoacid and ester compounds as pesticide degradation in water, soil, fruits and vegetables. Publications: More than 30 papers in corrosion and pesticide.

Organization: Faculty of Science, Agadir, Morocco. He was awarded a PhD degree in Corrosion field in 2006.

Main range of scientific interests: corrosion and the inhibition of the corrosion of copper and its alloys by organics and inorganics compounds. Publications: More than 10 papers in corrosion.

Main range of scientific interests: The research interest covers corrosion inhibition of aluminium, tin and tinplate in industrial water by oxoanions, tetrazole, pyrazole and aminoacid and ester compounds. Additionally, he works on pesticide degradation in water, soil, fruits and vegetables. Publications: More than 40 papers in corrosion and sensors fields.

Karine Groenen-Serrano was born in 1969 in France.

Education: She was awarded a PhD degree in Electrochemistry 1998.

Organization: She is currently a teacher and researcher at Faculté des Sciences de l'Université Paul Sabatier de Toulouse in France.

Hormatallah Abderrahim was born in 1957 in Khouribga, Morocco. Education: He was awarded a PhD degree in Pesticides Science at 1996.

Organization: He is currently a teacher and researcher at Institute Agronomique et Vétérinaire Hassan II, Agadir, Morocco. He is currently the Head of Pesticide Management and Pesticide residues Analysis Laboratory.

Prof. Mustapha Hilali was born in 1959 in Ksar El Kebir, Morocco. Education: He was awarded a PhD degree in Theoretical Chemistry in 1992.

Organization: He is currently a professor in the Faculty of Science, University Ibn Zohr and researcher in the Laboratory of Materials & Environment.

The disposal of pesticides can cause serious problems due to the chemical nature of the active ingredients in pesticide formulation and due to the large quantities of the unwanted products. These products undergo physical

and chemical alterations either due to extended storage, beyond the recommended expiry date, or storage under improper conditions (high humidity and temperature). In many countries, large quantities of pesticides have accumulated since they have lost their desirable characteristics. Pesticides that have passed their self-life

can be included in this category. Although, these products are not suitable for use, they still contain toxic compounds. In addition, many surplus pesticides, still within their expiration limits, may become useless, when their future use is prohibited due to toxicological or environmental concerns [1].

Recently, there has been increased interest in the use of electrochemical method for wastewater treatment. Electrochemical methods have been successfully applied to the purification of wastewaters containing phenolic substances [2], cyanides [3], refractory organic pollutants [4], olive oil production units [5], wastewaters generated in textilemanufacture [6] and tanneries [7]. The recent use of a boron-doped diamond (BDD) thin film anode [8-12] in anodic oxidation has shown that its O2 overvoltage is much higher than that of conventional anodes such as PbO2, doped SnO2, IrO2 and Pt, then producing larger amounts of adsorbed OH by reaction

giving a more rapid destruction of pollutants. Anodic oxidation with BDD then seems a suitable procedure to mineralize organics, as found for HClO4 aqueous solutions containing carboxylic acids such as acetic, malic, formic and oxalic [8], 4-chlorophenol [9], phenol [10], and benzoic acid [11], as well as for malic acid at pH 2.7 and ethylendiaminitetraacetic acid at pH 9.2 [12]. The objective of this work is to investigate the electrochemical degradation of methidathion, in aqueous solution using a boron-doped diamond electrode (BDD).

Boron-doped diamond films, Diachem®, were synthesized by the hot filament chemical vapor deposition technique (HF CVD) on conducting p-Si substrate (0.1Q cm, Siltronix).The filament temperature ranged from 2440 to 2560 °C and the substrate one was kept at 830 °C. The reactive gas used was methane in an excess of dihydrogen (1 % CH4 in H2). The doping gas was trimethylboron with a concentration of 3 ppm. The gas mixture was supplied to the reaction chamber, providing a 0.24 ^m-h-1 growth rate for the diamond layer. The diamond films were about 1^m thick. This HF CVD process produces columnar, randomly textured, polycrystalline films.