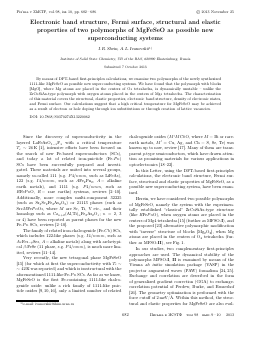 By means of DFT-based first-principles calculations, we examine two polymorphs of the newly synthesized 1111-like MgFeSeO as possible new superconducting systems. We have found that the polymorph with blocks [MgO], where Mg atoms are placed in the centers of O4 tetrahedra, is dynamically unstable - unlike the ZrCuSiAs-type polymorph with oxygen atoms placed in the centers of Mg4 tetrahedra. The characterization of this material covers the structural, elastic properties, electronic band structure, density of electronic states, and Fermi surface. Our calculations suggest that a high critical temperature for MgFeSeO may be achieved as a result of electron or hole doping through ion substitutions or through creation of lattice vacancies.

Very recently, the new tetragonal phase MgFeSeO [15] (for which at first the superconductivity with Tc ~ ~ 42 K was reported) and which is isostructural with the aforementioned 1111-like Fe-Pn SCs. As far as we know, MgFeSeO is the first Fe-containing 1111-like chalco-genide oxide: unlike a rich family of 1111-like pnic-tide oxides [9,10,16], only a limited number of related

chalcogenide oxides (M'MChO, where M = Bi or rare-earth metals, M' = Cu, Ag, and Ch = S, Se, Te) was known up to now, review [17]. Many of them are transparent p-type semiconductors, which have drawn attention as promising materials for various applications in optoelectronics [18-22].

In this Letter, using the DFT-based first-principles calculations, the electronic band structure, Fermi surface, structural and elastic properties of MgFeSeO, as a possible new superconducting system, have been examined.

Herein, we have considered two possible polymorphs of MgFeSeO, namely the system with the experimentally established "classical" ZrCuSiAs-type structure (like RFe PnO), when oxygen atoms are placed in the centers of Mg4 tetrahedra [15] (further as MFSO-I), and the proposed [23] alternative polymorphic modification with "inverse" structure of blocks [Mg2O2], when Mg atoms are placed in the centers of O4 tetrahedra (further as MFSO-II), see Fig. 1.

In our studies, two complementary first-principles approaches are used. The dynamical stability of the polymorphs MFSO-I, II is examined by means of the Vienna ab initio simulation package (VASP) in the projector augmented waves (PAW) formalism [24,25]. Exchange and correlation are described in the form of generalized gradient correction (GGA) to exchange-correlation potential of Perdew, Burke, and Ernzerhof [26]. The geometry optimization is performed with the force cutoff of 2meV/A. Within this method, the structural and elastic properties for MgFeSeO are also eval-

Fig. 1. Atomic structures of two possible polymorphs of MgFeSeO with various types of blocks [MgO]: MFSO-I (1) and MFSO-II (2), and the electron density map for MFSO-I (3)

uated. A further insight into the electronic properties of MgFeSeO is obtained by means of the full-potential method with mixed basis APW+lo (FLAPW) implemented in the WIEN2k suite of programs [27]. Exchange and correlation are also described in the form of GGA [26].

At the first stage, comparing the total energies Etot of MFSO-I versus MFSO-II, we found that EtMtFSO-11 is 0.08eV/form.unit lower than that for MFSO-I. This is in accordance with the estimations [23]; therefore the authors [23] assume that the structure of MFSO-II is more energetically favorable.

However we continued the comparative stability probing of these polymorphs, using the condition of dynamical stability, when the Gibbs free energy of the crystal is in a local minimum with respect to small structural deformations. In terms of elastic constants (Cj), this stability criterion for tetragonal crystals requires [28] that: C11 > 0, C33 > 0, C44 > 0, C66 > 0, Cn-Cu > 0, C11 + C33-2C13 > 0, and 2(Cn + C12HC33 + 4Ci3 > 0. We have evaluated six independent elastic constants (C11, C12, C13, C33, C44, and Cee) for polymorphs MFSO-I, II by calculating the stress tensors on different deformations applied to the equilibrium lattice of the tetragonal unit cell, whereupon the dependence between the resulting energy change and the deformation

was determined. We found that for MFSO-II C44 < 0; thus, we can assert that this structure is unstable. On the contrary, for the experimentally reported [15] structure MFSO-I all of the constants Cj are positive and satisfy all of the aforementioned conditions; thus, this crystal is dynamically stable, and further we will focus on this system.

Next, let us discuss the elastic properties for MFSO-I. The calculated elastic constants Cj allow us to estimate numerically bulk (B), shear (G), and Young's (Y) moduli, as well as compressibility (ft), Pugh's indicator (G/B ratio), and Poisson's ratio (v), see for example [29]. The calculated values are: B = 41.4GPa, ft = 0.02416 GPa-1, G = 25.6 GPa, Y = 63.7GPa, v = 0.244, and G/B = 0.618. This suggests that the parameter limiting the mechanical stability of this material is the shear modulus (B > G). Besides, according to the Pugh's criterion [30], MFSO-I should behave in a brittle manner: G/B > 0.57. Additionally, our estimation of elastic anisotropy using the so-called universal index [31] AU = 5Gv/Gr + By/BR - 6 (where Gv,r and Bv,r are respectively the shear and bulk moduli within the Voigt (V) and Reuss (R) limits [29]; for isotropic crystals AU = 0; deviations of AU from zero define the extent of crystal anisotropy) reveals that MFSO-I should demonstrate high elastic anisotropy (AU ~ 34.8).

Fig. 2. Electronic bands (a) and total and atomic-projected densities of states for MFSO-I (b)

Fig. 3. Fermi surfaces for the ideal stoichiometric MFSO-I (1) and for this system doped with holes (2) and electrons (3), see the text

The obvious reason is a very weak inter-block bonding (of van-der-Waals type) in MFSO-I, see also below. Note that this reason explains also the essential softening of the examined MFSO-I, whose basic elastic moduli (B, G, and Y) decrease considerably (by more than 50%) in comparison with isostructural LaFeAsO, which exhibits ionic inter-block bonding [32].

From Figs. 2 and 3, where the electronic bands and the Fermi surface of MFSO-I are depicted, we can see

that the bands crossing the Fermi level yield a multisheet FS, which consists of two groups of quasi-two-dimensional sheets parallel to the kz direction, which include electron-like cylinders in the corners of the Bril-louin zone and the hole-like cylinders along the r-Z line. A similar topology of FS was obtained for isostructural LaFeAsO [2-6]. From the densities of states (Fig. 2) we also see that the states near the Fermi level are formed exclusively by the Fe3d- and Se4p-orbitals of blocks [FeSe], whereas the blocks [MgO] are insulating.

What may be the origin of superconductivity of MgFeSeO with a high Tc 42K [15])? Since the experimental data [15] are very limited, for preliminary conclusions it is possible to use the empirical correlation [33] between Tc of Fe-based SCs and the so-

called anion height za (with respect to Fe sheet), when the highest superconducting temperatures (Tc > 40 K) are achieved for za — 1.38 A. According to the experiment, for MgFeSeO za — 1.52 A[15]; our calculations give za — 1.27A. The both values are far from the aforementioned "optimal" za. Another point, which casts doubts on the high Tc for ideal stoichiometric MgFe-SeO, comes from the estimation of Tc within the simplified model [12]. Herein, the BCS-like expression for Tc = 1.14ude-2/gN(Ef) was employed, and, as the authors say [12], these estimations do not necessarily imply electron-phonon pairing, as may just denote the average frequency of any other possible Boson responsible for pairing interaction (e.g. spin fluctuations). Using the parameters and g from Ref. [12]