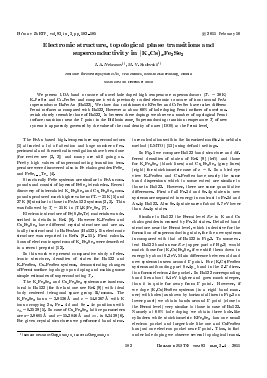 We present LDA band structure of novel hole doped high temperature superconductors (Tc ~ 30 K) KyFeiSei and Csa,Fe2Se2 and compare it with previously studied electronic structure of isostructural FeAs superconductor BaFe-> As-> (Bal22). We show that stoichiometric KFoiSej and CsFoiSoi have rather different Fermi surfaces as compared with Bal22. However at about 60% of hole doping Fermi surfaces of novel materials closely resemble those of Bal22. In between these dopings we observe a number of topological Fermi surface transitions near the F point in the Brillouin zone. Superconducting transition temperature Tc of new systems is apparently governed by the value of the total density of states (DOS) at the Fermi level.

The FeAs based high-temperature superconductors [1] attracted a lot of attention and huge number of experimental and theoretical investigations have been done (for review see [2, 3]) and many are still going on. Pretty high values of superconducting transition temperature were discovered also in Fe chalcogenides FeSe^ and FeSei-zTe* [4].

Structurally FeSe systems are similar to FeAs compounds and consist of layers of FeSe4 tetrahedra. Recent discovery of intercalated K„Fe2Se2 and Csj.Fe2Se2 compounds produced much higher values of Tc=31 K [5] and 27 K [6] similar to those in FeAs 122 systems [2, 3]. This was followed by Tc = 31K in (Tl,K)PeBSe2 [7].

In this work we present comparative study of electronic structure, densities of states for Bal22 and K„Fe2Se2, Csj.Fe2Se2 systems, demonstrating changes of Fermi surface topology upon doping and making some simple estimates of superconducting Tc.

In Fig.l we compare Bal22 band structure and different densities of states of Ref. [9] (left) and those for K„Fe2Se2 (black lines) and Csj.Fe2Se2 (gray lines) (right) for stoichiometric case of x = 0. In a bird eye view K„Fe2Se2 and Csj.Fe2Se2 have nearly the same band dispersions which to some extent are similar to those in Bal22. However, there are some quantitative differences. First of all Fe-3d and Se-4p states in new systems are separated in energy in contrast to Fe-3d and As-4p Bal22. Also Se-4p states are of about 0.7 eV lower than As-4p states.

Similar to Bal22 the Fermi level Ep in K and Cs chalcogenides is crossed by Fe-3d states. Detailed band structure near the Fermi level, which is decisive for the formation of superconducting state, for the new systems is compared with that of Bal22 in Fig.2. To some extent Bal22 bands near Ep (upper part of Fig.2) would match those for (K,Cs)Fe2Se2 if we shift them down in energy by about 0.2 eV. Main difference between old and new systems is seen around F point. For (K,Cs)Fe2Se2 systems antibonding part S<>-4p; band in the Z-F direction forms electron-like pocket. In Bal22 corresponding band lies about 0.4 eV higher and goes much steeper, thus it is quite far away from F point. However, if we dope (K,Cs)Fe2Se2 systems (in a rigid band manner) with holes (as shown by horizontal lines in Fig.2 on lower panel) we obtain bands around F point (close to the Fermi level) very similar to those in case of Bal22. Namely at 60% hole doping we obtain three hole-like cylinders while stoichiometric KFe2Se2 has one small electron pocket and larger hole like one and CsFe2Se2 has just one electron pocket near F point. Thus, in fact under hole doping we observe several topological transi-

tions of the Fermi surfaces which we shall briefly discuss t29 states (xy, xz and yz) contribute to the density of

To trace orbital composition of bands if Fig.3 we x2-y2) are almost absent in the density of states at EP.

to Bal22 FeAs system the sharp difference in the Fermi surface topology around the center of the Brillouin zone (F-point) is observed at x = 0 and x = 0.2. In fact, KFe2Se2 compound has one electron and one hole toruslike FS sheets while CsFe2Se2 has just one electron-like hourglass FS sheet. With hole doping КРегБег torus transforms to electron-like hourglass and hole cylinder. For 20% hole doped Cs compound we get similar picture with smaller volume FS sheets of the same topology. For x = 0.6 both К and Cs new FeSe materials have Fermi surfaces quite similar to those in Bal22 iron pnictide (see Ref. [9]), with rather typical hole-Ike FS cylinders in the center of the Brillouin zone.

In the Ref. [6] it was shown that К and Cs compounds follow the tendency of Tc dependence on anion height in FeSe plane observed in Ref. [14], which was plausibly explained in Ref. [15] in terms of total density of states change at the Fermi level. Similar observation was made for related compounds SrPt2As2, BaNi2As2 and SrNi2As2 in Ref. [16].

Now we also can make some simple BCS-like estimates of Tc. Taking the LDA calculated value of total DOS at the Fermi level N(EF) 3.94 states/eV/cell for K3.=0Fe2Se2 and 3.6 states/eV/cell for Csj,=oFe2Se2, wd = 350 К and coupling constant g = 0.21 eV estimated for Bal22 (as described in Ref. [15]), then using the BCS expression for Tc = we immediately obtain Tc = 34 К and 28.6 К for К and Cs systems respectively (Tc ratio 1.18). That is very close to experimental Tc values 31К[5] and 27 К (Tc ratio 1.15) [6]. If we take into account the fact that upon hole doping N(Ep) grows for both compounds up to 4.9 states/eV/cell in К and 4.7 states/eV/cell in Cs at 60% doping level superconducting transition temperatures can be estimated in a similar way to give Tc = 57 К for К system and Tc = 52 К for Cs system, showing the potential role of doping. Thus, in accordance with our previous work on pnictides [15], the values of Tc apparently well correlate with the total DOS value at the Fermi level N (Ер). It should be stressed that these estimates do not necessarily imply electron-phonon pairing, as wd may just denote the average frequency of any other possible Boson responsible for pairing interaction (e.g. spin fluctuations). At the same time the lower values of Tc in Cs compound in comparison to К system can be probably attributed to the usual isotope effect.

and Fermi surface topologies resemble very much those of Bal22 FeAs system. However, at intermediate dopings there are several topological transitions of the Fermi surfaces with changing of number of (electron-like and hole-like) sheets. Also we demonstrated that Tc values in new superconductors are well correlated with total DOS value at the Fermi level N(Ep), which is related to anion height relative to Fe square lattice, similar to that in other FeAs and Fe(Se,Te) systems.