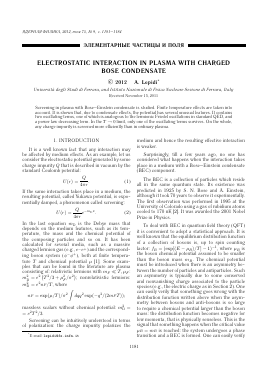 ELECTROSTATIC INTERACTION IN PLASMA WITH CHARGED

Screening in plasma with Bose—Einstein condensate is studied. Finite temperature effects are taken into account. It is shown that, due to condensate effects, the potential has several unusual features. It contains two oscillating terms, one of which is analogous to the fermionic Friedel oscillations in standard QED, and a power law decreasing term. In the T ^ 0 limit, only one of the oscillating terms survives. On the whole, any charge impurity is screened more efficiently than in ordinary plasma.

It is a well known fact that any interaction may be affected by medium effects. As an example, let us consider the electrostatic potential generated by some charge impurity Q that is described in vacuum by the standard Coulomb potential:

If the same interaction takes place in a medium, the resulting potential, called Yukawa potential, is exponentially damped, a phenomenon called screening:

In the last equation mD is the Debye mass that depends on the medium features, such as its temperature, the mass and the chemical potential of the composing particles and so on. It has been calculated for several media, such as a massive charged fermion gas (e.g., e-e+) and the corresponding boson system 0+), both at finite temperature T and chemical potential i [1]. Some examples that can be found in the literature are plasma consisting of: relativistic fermions with mF < T,if: mD = e2 (T2/3 + ¡jFf/n2); nonrelativistic fermions: mD = e2 nF/T, where

Screening can be intuitively understood in terms of polarization: the charge impurity polarizes the

medium and hence the resulting effective interaction is weaker.

Surprisingly, till a few years ago, no one has considered what happens when the interaction takes place in a medium with a Bose—Einstein condensate (BEC) component.

The BEC is a collection of particles which reside all in the same quantum state. Its existence was predicted in 1925 by S. N. Bose and A. Einstein, although it took 70 years to observe it experimentally. The first observation was performed in 1995 at the University of Colorado using a gas of rubidium atoms cooled to 170 nK [2]. It was awarded the 2001 Nobel Prize in Physics.

To deal with BEC in quantum field theory (QFT) it is convenient to adopt a statistical approach. It is well known that the equilibrium distribution function of a collection of bosons is, up to spin counting factor: fB = (exp[(£ — ¡B)/T] — 1)-1, where ¡B is the boson chemical potential assumed to be smaller than the boson mass mB. The chemical potential must be introduced when there is an asymmetry between the number of particles and antiparticles. Such an asymmetry is typically due to some conserved and nonvanishing charge associated to the particle species (e.g., the electric charge as in Section 2). One can easily verify that something goes wrong with the distribution function written above when the asymmetry between bosons and anti-bosons is so large to require a chemical potential larger than the boson mass: the distribution function becomes negative for low momenta, that is physically senseless. This is the signal that something happens when the critical value ¡B = mB is reached: the system undergoes a phase transition and a BEC is formed. One can easily verify

that the equilibrium distribution functions of particles and antiparticles for ¡iB > mB are:

The first term in the right-hand side of fB, that is proportional to a delta function and has amplitude C, represents the condensate. Using this formalism, the BEC is thus represented as a collection of particles of amplitude C, having zero momentum and spatially spread distribution function.

The problem of BEC in QFT is of interest for several reasons. First of all, BECs may be realized in the primordial phases of the universe evolution, in particular around the EW symmetry breaking epoch [3] as well as in astrophysical systems [4] and hence it is important to understand what are the consequences of its presence. In particular, we analyze in this talk a simple abelian U(1) model, that is interesting for application to white dwarfs astrophysics and serves as a toy model for the subsequent analysis of non-Abelian theories and application to cosmology. Besides the simplicity of the model, we found a rather unusual behavior of the electrostatic potential.

Secondly, elementary charged scalar particles as the ones present in our model characterize several popular models for physics beyond the standard model, e.g. the class of the SuperSymmetric theories (SUSY), where a boson partner is associated to any fermion of the standard model. These particles may, in general, form condensates, so our work may be useful as a toy model for understanding possible condensate phenomena in these theories.

explained in the Introduction, bosons condense. The BEC amplitude depends on the system temperature, on the fermion chemical potential and on the particle masses [5]:

The electrostatic potential U(r) is calculated from the time—time component of the photon polarization tensor n^, that enters the photon equation of motion as:

nv contains all the informations concerning the photon interaction with the other particles. Technically, we calculated the photon Green function using standard perturbative techniques up to the second order in the coupling constant e. The thermal effects were taken into account by calculating the average of the propagator over the thermal bath [5]. As a result, the boson — see Eqs. (3) — and fermion distribution functions:

and assume finite temperature T = 0, global charge neutrality Q = 0, and nonvanishing fermion chemical potential ¡F =0. Fermions are needed to induce the boson condensation. Indeed, if there is a large asymmetry between fermions and anti-fermions, that means large ¡F, there must be a corresponding asymmetry between bosons and anti-bosons to preserve the total charge neutrality of the system. Hence, for iF sufficiently large, the critical value of the boson chemical potential is reached (pB = mB) and, as we

Once the n00 is known, the electrostatic potential U(r) can be calculated as:

When the BEC is absent, noo is independent of the photon momentum k, hence the standard Yukawa screening comes from poles at purely imaginary k. In this case the Debye mass is simply n00 = —m^. When a BEC is present, the situation is more complicated because n00 is k dependent and infrared singular [5]:

As a result of the peculiar form of the photon polarization tensor, the electrostatic potential is a rather complicated function that can't be analytically solved in the most general case. Nevertheless, it can be calculated in some special limits. When r 4m2 > e2m0, for instance, the potential is [5, 6]:

The first oscillating term comes from pole contributions analogous to the standard Debye screening. The same term without the temperature corrections was found in [7] by a different technique. One can note that in this case the "Debye mass" is nonanalytic in the coupling constant e, being it proportional to This term is the only one surviving in the T ^ 0 limit. The second term is a nonperturbative contribution rapidly decreasing as r-6. It is actually the dominant contribution to U(r) coming from an integration along the imaginary axis and under the assumptions r ^^ and m2 = 0, for details see Section 4 in [6]. An other interesting case is when ¡iB = mB, C = 0, that is, the boson potential has reached its maximum limiting value, but the condensate is not yet formed. In this case the dominant term in the integration along the imaginary axis gives the contribution [6]:

''Please note that the localization of the pole at y/e/2rri2 is exact only in the T ^ 0 limit. Otherwise, the pole is shifted and the analytic calculation of a generic solution for any value of the parameters becomes impossible. For more details see [6].

We can conclude that the condensate always manifests itself by a strong asymptotic increase of screening. The third term in Eq. (11) is a finite temperature effect. It is analogous to Friedel oscillations in QED, which on the contrary are present at T = 0 and exponentially fade away at finite temperature — for a complete discussion on this point see [6].

The BEC is a purely quantum state of matter having very interesting features. It can be realized in laboratory, a field of research that became very active in the last