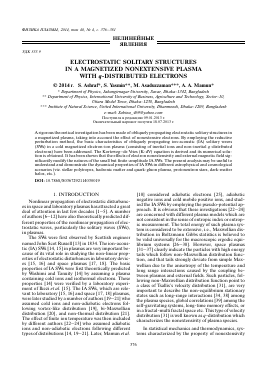 A rigorous theoretical investigation has been made of obliquely propagating electrostatic solitary structures in a magnetized plasma, taking into account the effect of nonextensive electrons. By employing the reductive perturbation method, the basic characteristics of obliquely propagating ion-acoustic (IA) solitary waves (SWs) in a cold magnetized electron-ion plasma (consisting of inertial ions and non-inertial q-distributed electrons) have been addressed. The Korteweg—de Vries (K-dV) equation is derived and its numerical solution is obtained. It has been shown that the effects of electron nonextensivity and external magnetic field significantly modify the natures of the small but finite-amplitude IA SWs. The present analysis may be useful to understand and demonstrate the dynamical properties of IA SWs in different astrophysical and cosmological scenarios (viz. stellar polytropes, hadronic matter and quark-gluon plasma, protoneutron stars, dark-matter halos, etc.).

The SWs were first observed by Scottish engineer named John Scot Russell [13] in 1834. The ion-acoustic (IA) SWs [14, 15] in plasmas are very important because of its vital role in studying the non-linear properties of electrostatic disturbances in laboratory devices [15, 16] and space plasmas [17, 18]. The basic properties of IA SWs were first theoretically predicted by Washimi and Tanuity [14] by assuming a plasma containing cold ions and isothermal electrons. These properties [14] were verified by a laboratory experiment of Ikezi et al. [15]. The IA SWs, which are relevant to laboratory [15, 16] and space [17, 18] plasmas, were later studied by a number of authors [19—21] who assumed cold ions and non-adiabatic electrons following vortex-like distribution [19], bi-Maxwellian distribution [20], and non-thermal distribution [21]. The effect of finite ion temperature was then included by different authors [22—24] who assumed adiabatic ions and non-adiabatic electrons following different types of distributions [14, 19—21]. Later, Mamun et al.

[10] considered adiabatic electrons [25], adiabatic negative ions and cold mobile positive ions, and studied the IA SWs by employing the pseudo-potential approach. It is obvious that these investigations [22—24] are concerned with different plasma models which are not consistent in the sense of entropic index or entrop-ic measurement. The total energy of such plasma system is considered to be extensive, i.e., Maxwellian distribution in Boltzmann Gibbs statistics is believed to be valid universally for the macroscopic ergodic equilibrium systems [26—30]. However, space plasmas [31—37] clearly indicate the particles with high energy tails which follow non-Maxwellian distribution function, and that tails strongly deviate from simple Max-wellian due to the anisotropy of the temperature and long range interactions caused by the coupling between plasmas and external fields. Such particles, following non-Maxwellian distribution function point to a class of Tsallis's velocity distribution [31], are very important to describe the non-equilibrium stationary states such as long-range interactions [34, 38] among the plasma species, global correlations [39] among the self-gravitating systems, long-time memory effects, or in a fractal-multi fractal space etc. This type ofvelocity distribution [31] is well known as q-distribution which characterizes the nonextensivity of plasma species.

In statistical mechanics and thermodynamics, systems characterized by the property of nonextensivity

To take into account the nonextensivity of electrons in plasma, the q-distribution function is defined

where ^, Te, me, v and e stand for the electrostatic potential, the electron temperature, mass of the electron, velocity of the electrons and the magnitude of the electron charge, respectively. Note that fe(v) is the particular distribution that maximizes the Tsallis entropy and therefore conforms to the laws of thermodynamics. The constant of normalization Cq is given by

All of these investigations [41—51] are limited to unmagnetized dusty plasma model. However, for a bounded plasma, which is a common feature of laboratory and space plasma, it is inevitable to take into account the magnetic field. It is well known that the effects of the external magnetic field and nonextensivity of electrons significantly modify the basic features of IA SWs [14, 15, 46]. Therefore, in the present work, we consider a plasma containing non-extensive electrons and inertial ions in presence of an external static homogeneous magnetic field, and study the properties of the obliquely propagating IA SWs.

We consider the nonlinear propagation of the IA waves in collisionless, two-component magnetized plasma system consisting of non-inertial electrons following nonextensive q -distribution and inertial ions. Thus, at equilibrium we have ni0 = ne0, where ni0 (ne0) is the equilibrium ion (electron) number density. The dynamics of the IA waves, whose phase speed is much smaller (larger) than the electron (ion) thermal speed in presence of an external magnetic field B0 = ZB0, is described by the normalized equations of the form

Here, the parameter q stands for the strength of nonextensivity and r is the standard gamma function. It may be useful to note that the q-distribution in Eq. (1) is unnormalizable, when q < -1. In the extensive limiting case (q ^ 1), Eq. (1) reduces to the well known Maxwell—Boltzmann velocity distribution. This means that q -distribution prevails only nonextensive behaviour for q ^ 1, and q = 1 corresponds to Max-wellian distribution.

Now-a-days, nonextensive [31] plasma has received a deserving attention due to its wide relevance in astrophysical and cosmological scenarios like stellar polytropes [34], hadronic matter and quark-gluon plasma [36], protoneutron stars [37], dark-matter halos [35] etc. Nonextensive plasmas associated with IA waves, electron-acoustic (EA) waves, dust-ion-acoustic (DIA) waves or dust-acoustic (DA) waves are investigated by taking electron [41, 44—47], or ion [48], or both to be nonextensive [49]. Eslami et al. [46] studied the characteristics of the head-on collision of IA SWs in a collisionless plasma, and discussed the effect of electron nonextensivity on the phase shifts of both the colliding SWs. Recently, Tribeche [48] stressed about

where nt is the ion number density normalized by its equilibrium value n0, u, is the ion fluid velocity nor-

To derive a dynamical equation for the IA solitary waves from Eqs. (2)—(4), we must find an appropriate coordinate frame where the wave can be described smoothly. We now follow the reductive perturbation technique [14], and construct a nonlinear theory for the IA waves with small but finite amplitude limit,

which leads to a scaling of the independent variables through the stretched coordinates [14, 52]:

where e is a smallness parameter (0 < e < 1) measuring the weakness of the dispersion, vp is the wave phase velocity normalized by the IA speed (C;-); lx, ly, and lz are

the directional cosines of the wave vector k along the