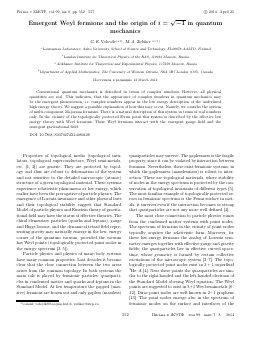 Conventional quantum mechanics is described in terms of complex numbers. However, all physical quantities are real. This indicates, that the appearance of complex numbers in quantum mechanics may be the emergent phenomenon, i.e. complex numbers appear in the low energy description of the underlined high energy theory. We suggest a possible explanation of how this may occur. Namely, we consider the system of multi-component Majorana fermions. There is a natural description of this system in terms of real numbers only. In the vicinity of the topologically protected Fermi point this system is described by the effective low energy theory with Weyl fermions. These Weyl fermions interact with the emergent gauge field and the emergent gravitational field.

Properties of topological media (topological insulators, topological superconductors, Weyl semi-metals, etc. [1, 2]) are generic. They are protected by topology and thus are robust to deformation of the system and not sensitive to the detailed microscopic (atomic) structure of a given topological material. These systems experience relativistic phenomena at low energy, which earlier have been the prerogative of particle physics. The emergence of Lorentz invariance and other physical laws and their topological stability suggest that Standard Model of particle physics and Einstein theory of gravitational field may have the status of effective theories. The chiral elementary particles (quarks and leptons), gauge and Higgs bosons, and the dynamical tetrad field representing gravity may naturally emerge in the low- energy corner of the quantum vacuum, provided the vacuum has Weyl points (topologically protected point nodes in the energy spectrum [3-5]).

Particle physics and physics of many-body systems have many common properties. Last decades it became clear that the close connection between the two areas arises from the common topology. In both systems the main role is played by fermionic particles: quasiparti-cles in condensed matter and quarks and leptons in the Standard Model. At low temperature the gapped (massive) fermions are frozen out and only gapless (massless)

quasiparticles may survive. The gaplessness is the fragile property, since it can be violated by interaction between fermions. Nevertheless, there exist fermionic systems, in which the gaplessness (masslessness) is robust to interaction. These are topological materials, where stability of nodes in the energy spectrum is protected by the conservation of topological invariants of different types [5]. The most familiar example of topologically protected zeroes in fermionic spectrum is the Fermi surface in metals: it survives even if the interaction becomes so strong that quasiparticles are not any more well defined [4].

The most close connection to particle physics comes from the condensed matter systems with point nodes. The spectrum of fermions in the vicinity of point nodes typically acquires the relativistic form. Moreover, for these low-energy fermions the analog of Lorentz symmetry emerges together with effective gauge and gravity fields; the quasiparticles live in effective curved spacetime, whose geometry is formed by certain collective excitations of the microscopic system [3-7]. The topologically protected point nodes exist in 3 + 1 superfluid 3He-A [4]. Near these points the quasiparticles are similar to the right-handed and the left-handed electrons of the Standard Model obeying Weyl equation. The Weyl points are suggested to exist in 3+1 Weyl semimetals [812]. Dirac point nodes are well known in 2+1 graphene [13]. The point nodes emerge also in the spectrum of fermionic modes on the surface and interfaces of the

fully gapped topological insulators [14, 1, 15] and topological superfuids [16, 17]. The Weyl and Dirac points represent the exceptional (conical, diabolic) points of level crossing, which avoid the level repulsion [18]. Topological invariants for such points, at which the branches of spectrum merge, were introduced by Novikov [19]. In our case the crossing points occur in momentum space [20, 21].

In the vicinity of the Weyl point the system is effectively described by the two-component fermion field ^ obeying Weyl equation [3, 5, 6]

Here pa is the position of the Fermi point, whose spacetime variation gives rise to the effective dynamical electromagnetic field Fav = dapV — d^p^; and is an emergent vierbein, which describes the effective spacetime with metric gav = nabeaeV (we denote metric of Minkowsky space-time by nab). In Eq. (1) the vierbein does not commute with derivative. The latter does not contain spin connection. This means that we deal with the effective gravity with torsion in the limit of vanishing SO(3,1) curvature. This is the so-called telepar-allel gravity [22]. The corresponding geometry differs both from Riemann-Cartan and Riemannian geometry. In superfluid 3He-A Eq. (1) has been explicitly obtained by expansion of the Bogoliubov-de Gennes Hamiltonian near the Weyl point [6]; for the expansion near Dirac point in 2+1 D graphene see Ref. [23-25]. In both cases the complicated atomic structure of liquid and solid is reduced to the description in terms of the effective two-component spinors.

The emergence of Weyl spinor has important consequences both in the condensed matter physics and in the high energy physics. This is because Weyl fermions represent the building blocks of the Standard Model of particle physics (SM). Emergence of Weyl fermions in condensed matter together with Lorentz invariance, effective gravity and gauge fields and the topological stability of emergent phenomena suggest that SM and Einstein theory of gravitational field (GR) may have the status of effective theories. The chiral elementary particles (quarks and leptons), gauge and Higgs bosons, and the dynamical vierbein field may naturally emerge in the low-energy corner of the quantum vacuum, provided the vacuum has topologically protected Weyl points.

In this approach it is assumed from the very beginning, that the underlying microscopic Hamiltonian is the complex-valued N x N matrix, acting on the complex valued N-component wave function. At the first

glance this is not surprizing, since quantum mechanics (or, in general, the quantum field theory), is described by the language of complex numbers. All the equations of quantum mechanics - the Weyl, Dirac, and Schrodinger equations - are described in terms of complex numbers. On the other hand, the imaginary unit i = a/ —1 is the product of human mind, which is mathematically convenient, while all the measured physical quantities are real. This may imply that the imaginary unit i = %/—1 should not enter any physical equation. It is known that Schrodinger strongly resisted to introduce i into his wave equations (see Yang [26]). The Schrodinger equation is obtained from Dirac equation in the non-relativistic limit, when the character-isic non- relativistic energy E ^ mc2, where m is the mass of Dirac particle. In turn, the Dirac equation is obtained from Weyl equation, when the two-component left-handed and the two-component right-handed Weyl fermions are mixed to form the 4-component Dirac particle.

where matrices of real and imaginary units are 1 and

The complex conjugation is defined by matrix C, which can be chosen as:

It is necessary to find out the reason, why such structure entered the wave function in quantum mechanics, i.e. what is the geometric, symmetry or topological origin of the algebra of complex numbers in the formalism of quantum mechanics. One scheme suggested by Adler [27] is the so-called trace dynamics, where g = ieff appears as an anti-self-adjoint operator: ieff = —i\ff,

The general scheme that describes how Weyl spinors appear in the low energy approximation to the system of multi-component fermions was given by Horava [5] and developed in [28]. Here we concentrate on the underlying microscopic theory, which is described solely in terms of the real numbers, i.e. in terms of Majorana fermions. It

is shown, that there exists the special choice of coordinates, in which the low energy description is again given in terms of Weyl spinors. This scheme demonstrates that the effective imaginary unit ieff may be also the emergent phenomenon in quantum mechanics, and this ieff emerges together with Weyl fermions, gauge fields, gravity, and observed coordinate space itself.

Majorana fermions are described by the N-component real-valued spinor wave function x(Q). We start from the functions defined in the coordinates Q. These coordinates not necessarily coincide with the coordinates of observed space, in which the low energy physics is described in terms of Weyl fermions. The evolution in time of the wave function is given by the equation dtx = Ax, where A is the operator. This operator may be non-local in the original coordinates Q. In the language of quantum field theory the dynamics of Majorana fermions is governed by the functional integral over fictitious N - component a