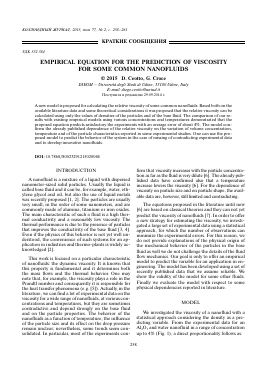 EMPIRICAL EQUATION FOR THE PREDICTION OF VISCOSITY FOR SOME COMMON NANOFLUIDS

A new model is proposed for calculating the relative viscosity of some common nanofluids. Based both on the available literature data and some theoretical considerations it was proposed that the relative viscosity can be calculated using only the values of densities of the particles and of the base fluid. The comparison of our results with existing empirical models using various concentrations and temperatures demonstrated that the proposed equation predicts satisfactory the experiments with an average error of about 4%. The model confirms the already published dependence of the relative viscosity on the variation of volume concentration, temperature and of the particle characteristics reported in some experimental studies. One can use the proposed model to predict the behavior of the system in the case of missing of contradicting experimental data and to develop innovative nanofluids.

A nanofluid is a mixture of a liquid with dispersed nanometer-sized solid particles. Usually the liquid is called base fluid and it can be, for example, water, ethylene glycol and oil, but also the use of liquid metals was recently proposed [1, 2]. The particles are usually very small, in the order of some nanometers, and are commonly made of alumina, titanium or iron oxides. The main characteristic of such a fluid is a high thermal conductivity and a reasonably low viscosity. The thermal performance is due to the presence of particles that improves the conductivity of the base fluid [3, 4]. Even if the physics of this behavior is not yet well understood, the convenience of such systems for an application in industries and thermo-plants is widely acknowledged [2].

This work is focused on a particular characteristic of nanofluids: the dynamic viscosity. It is known that this property is fundamental and it determines both the mass flows and the thermal behavior. One may note that, for example, the viscosity plays a role in the Prandtl number and consequently it is responsible for the heat transfer phenomena (e.g. [5]). Actually, in the literature, we can find a lot of experimental data on the viscosity for a wide range of nanofluids, at various concentrations and temperatures, but they are sometimes contradictive and depend strongly on the base fluid and on the particle properties. The behavior of the nanofluids as a function of temperature, the influence of the particle size and its effect on the drop pressure remain unclear; nevertheless, some trends seem consolidated. In particular, most of the experiments con-

firm that viscosity increases with the particle concentration as far as the fluid is very dilute [6]. The already published data have confirmed also that a temperature increase lowers the viscosity [6]. For the dependence of viscosity on particle size and on particle shape, the available data are, however, still limited and contradicting.

The equations proposed in the literature until now [6] are based on classical theories and they can not yet predict the viscosity of nanofluids [7]. In order to offer a new strategy for estimating the viscosity, we investigated a large set of experimental data using a statistical approach, for which the number of observations can minimize the experimental errors. For this reason, we do not provide explanations of the physical origin of the mechanical behavior of the particles in the base fluid as well we do not challenge the details of the fluid flow mechanics. Our goal is only to offer an empirical model to predict the variable for an application in engineering. The model has been developed using a set of recently published data that we assume reliable. We show the validity of the model for some other fluids. Finally we evaluate the model with respect to some physical dependencies reported in literature.

We investigated the viscosity of a nanofluid with a statistical approach considering the density as a predicting variable. From the experimental data for an Al2O3 and water nanofluid in a range of concentration up to 4% (Fig. 1), a direct proportionality follows as:

EMPIRICAL EQUATION FOR THE PREDICTION OF VISCOSITY

where n (mPa s) and p (kg/m3) are the viscosity and the density of the nanofluid, respectively. The bottom index B indicates the base fluid; coefficients A and B are the slope and the intercept of the linear dependence, respectively.

The density of nanofluid p has been calculated with Eq. (2) considering the nanofluid as an ideal solution. This hypothesis is based on the assumption that there is not any interaction between the solid particle and the base fluid (see [8] for more details).

where 9 is the volume concentration, and the index P refers to the particle. The experimental values for n and p were taken from Ref. [9].

Referring to Eq. (1), one may note that when the volume concentration 9 tends to zero the viscosity n and the density p of the nanofluid tends to nB and pB, respectively. This limit condition can be calculated from

Now, using a linear regression analysis (Fig. 1), one may note that for the considered nanofluid the slope A is equal to 3.4978. This value is close to the ratio of the density of the particle to that of the base fluid:

where pP is the density of the particle.

In the same fashion, Eq. (4) and the linear regression of Fig. 1 give the coefficient B, which can be ex-

Then B can be calculated:

The use of the PE- ratio is not novel in literature. Re-

cently, Rudyak et al. [10] have shown using a molecular dynamic analysis that the density deeply influences the viscosity of a nanofluid. In particular, for the Al2O3/water fluid system the relative viscosity has been

Fig. 1. Linear dependence obtained with Eq. (1) using the experimental values of n taken from [9] for the Al2O3/wa-ter nanofluid.

assumed varying linearly with the PE- ratio giving the

Thus, using Eqs. (5) and (6) we can proposed a new equation to describe the change of the viscosity of Al2O3/water fluid system with concentration of nano-particles up to 4%:

APPLICABILITY OF THE MODEL FOR OTHER FLUIDS

The experimental details and references as well as the results of calculations are summarized in the table; the results show a very good agreement of the obtained values with an average error of 4% and the accuracy R2 equal to 0.92.

Fig. 2. Comparison between the experimental data and calculated values of the relative viscosity n/lB obtained with Eq. (9).

Fig. 3. Dependence of an absolute error for the values calculated with Eq. (9) on volume concentration of nanofluid.

Some considerations are needed to underline the relation of the proposed model to the trends reported in literature, in particular, those referring to the effect of density on the viscosity of the nanofluid.

Many authors reported that the relative viscosity depends strongly on the volume concentration (see [17] for a comprehensive discussion). As far as the particle concentration increases, the — ratio becomes

higher. In our model, Eq. (2) accounts for this dependence. When the nanofluid has higher density, the relative viscosity must increase.

Plotting the absolute errors given in the table, the model gives a dispersion of error values at low concentrations, whereas it works better at high concentrations (Fig. 3).

It has been observed that when the temperature increases, the relative viscosity becomes higher (e.g. [17]). This observation is consistent with the proposed model. In fact, for all common fluids the density decreases with temperature; therefore, assumed that the solid particle density change is negligible, the p/pB ratio increases with temperature giving a higher value of the relative viscosity.

It is also known that the aggregates can form in nanofluids especially at high concentrations that deeply modify the characteristic of the system. As far as the sources, which we used for modeling, reported that the particles were dispersed in solutions we assume that no agglomerates were present during the experiments.

It is known that the effect of particle size and shape is also very important [17]. We did not consider these

parameters in our work; we note, however, that the characteristics of the particle can influence the density, which is the predicting variable considered in this work.