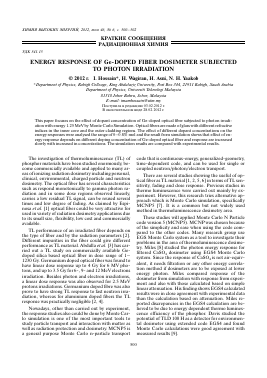 This paper focuses on the effect of dopant concentration of Ge-doped optical fiber subjected to photon irradiation with energy 1.25 MeV by Monte Carlo Simulation. Optical fibers are made of glass with different refractive indices in the inner core and the outer cladding regions. The effect of different dopant concentrations on the energy responses were analysed the range of 0—0.8% mol and the result from simulation shows that effect of energy response depends on different doping concentration of Ge-doped optical fiber and response are increased slowly with increased in concentrations. The simulation results are compared with experimental results.

The investigation of thermoluminescence (TL) of phosphor materials have been studied enormously, become commercially available and applied to many areas of ionizing radiation dosimetry including personal, clinical, environmental, charged particle and neutron dosimetry. The optical fiber has several characteristics such as respond monotonically to gamma photon radiation and in some dose regions observed linearly, carries a low residual TL signal, can be reused several times and low degree of fading. As claimed by Espinosa et al. [1] optical fiber could be very attractive for used in variety of radiation dosimetry applications due to its small size, flexibility, low cost and commercially available.

TL performance of an irradiated fiber depends on the type of fiber and by the radiation parameters [2]. Different impurities in the fiber could give different performance as TL material. Abdulla et al. [3] has carried out a TL study on commercially available Ge-doped silica based optical fiber in dose range of 1— 1230 Gy. Germanium doped optical fiber was found to have linear dose response up to 4 Gy for 6 MV photons, and up to 3.5 Gy for 6-, 9- and 12 MeV electrons irradiation. Besides photon and electron irradiations, a linear dose response was also observed for 2.5 MeV protons irradiations. Germanium doped fibre was also prove to have strong TL response to fast neutron irradiation, whereas for aluminium doped fibers the TL response was practically negligible [2, 4].

Nowadays, other than carried out by experiment, the response studies also could be done by Monte Carlo simulation is one of the most important tools to study particle transport and interaction with matter as well as radiation protection and dosimetry. MCNP5 is a general purpose Monte Carlo n-particle transport

code that is continuous-energy, generalized-geometry, time-dependent code, and can be used for single or coupled neutron/photon/electron transport.

There are several studies showing the useful of optical fiber as TL material [1, 2, 5, 6] in terms of TL sensitivity, fading and dose response. Previous studies in thermo luminescence were carried out mainly by experiment. However, this research tries alternative approach which is Monte Carlo simulation, specifically MCNP5 [7]. It is a common but not widely used method in thermoluminescence dosimetry area.

These studies will applied Monte Carlo N Particle code version 5 (MCNP5). MCNP was chosen because of the simplicity and ease when using the code compared to the other codes. Many research group use EGS Monte Carlo system as a tool to investigate their problems in the area of thermoluminescence dosimetry. Miles [8] studied the photon energy response for filtered CaSO4 dosimeter using EGS4 Monte Carlo system. Since the response of CaSO4 is not air-equivalent, it needs filtration or any other energy correlation method if dosimeters are to be exposed at lower energy photon. Miles compared response of the dosimeter from simulation with response from experiment and also with those calculated based on simple linear attenuation. His finding shows EGS4 calculated results were in close agreement with experimental data than the calculation based on attenuation. Miles reported discrepancies in the EGS4 calculation are believed to be due to energy dependent thermo luminescence efficiency of the phosphor. Davis studied the potential of TLD 100 H as a detector for environmental dosimeter using extended code EGS4 and found Monte Carlo calculations were good agreement with measured results [9].

The lack ofpublished literature referencing MCNP shows that there is a need for more research to be conduct with MCNP. Recently, we have thermo luminescence energy response of TLD 100 and Ge-doped optical fiber subject to photon irradiation using Monte Carlo N-particle code simulation [10—13]. This research utilized MCNP5 simulation in order to study the energy response as a function of doping concentration with the aim to promote the usage of computer simulation as well as provide basic knowledge in MCNP5 application. This research will contribute to the knowledge that can create new experts in thermoluminescence area as well as Monte Carlo area.

Doped silica is a key material in several technological fields. Ge is the dopant that has been most frequently reported in diffusion studies on optical fibers. In optical fiber, doping with germanium atoms permits the creation of the radial profile of the refractive index, which is essential for an optical guide. The Ge-doped optical fiber consist of element Silica 53.6%, Oxygen 46.1% and Germinium 0.3%. The fiber initial length is 10 m; it was cut into 50 tiny pieces. Each pieces had 5 mm long. The fractions of elements in each fiber were measured by SEM technique as measured by Yaakob et al. [14, 15].

Beside time saving, there are several advantages that can be offered when using simulation, specifically MCNP5, in investigating photon energy response or any TL research. MCNP5 provides interactive software; called MCNP vised, which can assist the user to create the input file, as well as gave the user visual of the geometry created. Other than that, MCNP also can be cost saving. Simulation can provide preliminary result of photon energy respons