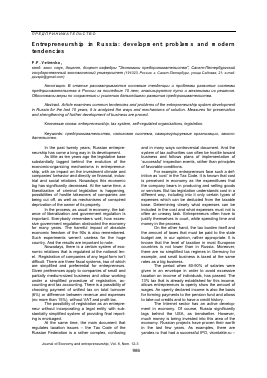 Abstract. Article examines common tendencies and problems of the entrepreneurship system development in Russia for the last 10 years, it is analyzed the ways and mechanisms of solution. Measures for preservation and strengthening of further development of business are proved.

In the past twenty years, Russian entrepreneurship has come a long way in its development.

As little as ten years ago the legislative base substantially lagged behind the evolution of the economic-organizing mechanisms in entrepreneur-ship, with an impact on the investment climate and companies' behavior and directly on financial, industrial and social relations. Nowadays this economic lag has significantly decreased. At the same time, a liberalization of criminal legislation is happening, possibilities of hostile takeovers of companies are being cut off, as well as mechanisms of conspired deprivation of the owner of its property.

In the process, as usual in economy, the balance of liberalization and government regulation is important. Everybody remembers well, how excessive government regulation obstructed the economy for many years. The harmful impact of absolute economic freedom of the 90s is also remembered. Such experiments weren't useless for the huge country. And the results are important to note.

Nowadays, there is a certain system of economic relations that is regulated at the national level. Registration of companies of any legal form isn't difficult. There are three fiscal systems, two of which are simplified and preferential for entrepreneurs. Given preferences apply to companies of small and partially medium-sized business and allow working under a simplified procedure of registration, accounting and tax accounting. There is a possibility of choosing payment of unified tax on total turnover (6%) or difference between revenue and expenses (no more than 15%), without VAT and profit tax.

The possibility of registration as an entrepreneur without incorporating a legal entity with substantially simplified system of providing final reporting is envisaged.

At the same time, the main document that regulates taxation issues - the Tax Code of the Russian Federation is a rather complex, confusing

and in many ways controversial document. And the system of tax authorities can often be hostile toward business and follows plans of implementation of 'successful' inspection events, rather than principles of favorable conditions.

For example, entrepreneurs face such a definition as 'cost' in the Tax Code. It is known that cost is perceived in economy as the expenditures that the company bears in producing and selling goods or services. But tax legislation understands cost in a different way, including into it only certain types of expenses which can be deducted from the taxable base. Determining clearly what expenses can be included in the cost and what expenses must not is often an uneasy task. Entrepreneurs often have to justify themselves in court, while spending time and money in the process.

On the other hand, the tax burden itself and the amount of taxes that must be paid to the state budget are, in our opinion, rather appropriate. It is known that the level of taxation in most European countries is not lower than in Russia. Moreover, there are no simplified tax regimes in Germany for example, and small business is taxed at the same rates as a big business.

The period when 80-90% of salaries were given in an envelope in order to avoid excessive taxation on income of individuals, has passed. The 13% tax that is already established for this income, allows entrepreneurs to openly show the amount of wages. An openly declared income is also the basis for forming payments to the pension fund and allows to take out credits and to have a credit history.

The Internet sector has an active development in economy. Of course, Russia significantly lags behind the USA, as trendsetter. However, much money is being invested into this area of the economy. Russian projects have proven their worth in the last few years. As examples, there are yandex.ru that had a successful IPO, vkontakte.ru -

a Russian social network that was originally created based on facebook.com, but then became a powerful independent project that nowadays in certain ways can compete with the "parent site" because of efforts of unique Russian developers and managers. The government is interested in development of Internet technologies: a part of government services is gradually starting to be provided online, an electronic government is forming and virtual job vacancies are created.

Bureaucratic obstructions, of course, do exist. Not all ideas are implemented and not even all officials have even a basic understanding of the advantages and prospects of 'electronic' development of economy. For example, development of Internet technologies helps to intensify globalization processes. Many professions don't require frequent presence of a person at work. Unique possibilities for people with disabilities are created. Distance learning is developing. Business incubators are being created for entrepreneurs, as well as special programs of grants for small business for interesting and worked-through projects within the subjects of the Russian Federation.

As the Russian Government adopted in 2011 the Strategy on innovative development of the Russian Federation for the period until 2020 (Resolution No.2227-r), the idea was stated about movement of economy toward an innovative socially-oriented model of development as the sole possible method of achieving goals of lasting economical and social development for Russia.

Government policy in innovations is based on interaction of the public authorities, specialized federal and regional centers, educational system and business to comprehensively develop the innovative capacity of the country.

In the previous 10 years the government organized certain work to form national research centers, to develop infrastructure for supporting innovations, and support for the creation and development of innovative clusters. Several government Councils and Commissions on modernization, innovative and technological development of the country's economy have been created (for example, the Presidential Council for modernization of economy and innovative development of Russia - a presidential advisory body, organized to provide interaction of the federal public authorities, state authorities of the subjects of the Russian Federation, bodies of local self-government, social organizations, scientific and other communities for discussing questions associated with modernization of the economy and innovative development of Russia).

Nevertheless, achieving the planned level indicators of demand for innovation in the real economy sector in 2013-2014 did not occur. Generally, this is associated with substantial decreasing of demand for innovation from the real economy sector because of crisis events and reduction of state budget payments of the federal target program "Researching and elaborating development of scientific-

technological complex of Russia for priority directions in 2007-2013."

Government money for scientific research and experimental design works is not spent effectively enough in most of economy sectors. The problem of scientific staff is not fully resolved, though the government attempted significantly to improve this situation.1

The key problem is low demand for innovations in the economy of the Russian Federation, and the specifics of its structure: priority of importing ready equipment instead of implementation of innovative developments.

Government and private sectors don't show enough interest in elaboration and implementation of innovations. The level of activity of market agents in implementing innovations is significantly behind in this respect as compared to the leading countries of the world.

For example, business structures are not generally interested in innovations of technological type. In 2009 development and implementation of technological innovations were executed by 9.4% of the total number of Russian manufacturer companies, and this is significantly lower than in Germany (71.8%), Belgium (53.6%), Estonia (52.8%), Finland (52.5%) and Sweden (49.6%). The share of companies which invest in acquisition of new industrial technologies is 11.8% of the total number of companies. The share of expenses for technological innovations in the overall amount of expenses to produce shipped goods, implementation of works and services of industrial companies in Russia is 1.9% (similar parameter in Sweden is 5.4%, in Finland 3.9%, in Germany 3.4%).2

The system of public-private partnership in the field of implementation of innovative projects in Russia is not developed enough. The share of organizations receiving target financing from the state budget is 0.8% (in comparison, it is 8.8% in Germany, 12.7% in Belgium). In 2011, the amount of research programs of small business innovations and transfer of resulting technologies in USA was assessed at 2 billion