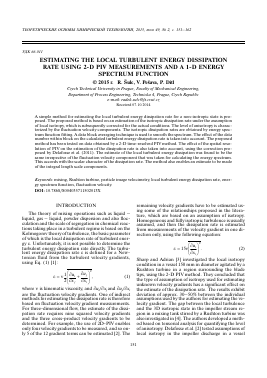 A simple method for estimating the local turbulent energy dissipation rate for a non-isotropic state is proposed. The proposed method is based on an estimation of the isotropic dissipation rate under the assumption of local isotropy, which is subsequently corrected for the actual conditions. The level of anisotropy is characterized by the fluctuation velocity components. The isotropic dissipation rates are obtained by energy spectrum function fitting. A data block averaging technique is used to smooth the spectrum. The effect of the data number within block on the calculated turbulent energy dissipation rate is taken into account. The proposed method has been tested on data obtained by a 2-D time-resolved PIV method. The effect of the spatial resolution of PIV on the estimation of the dissipation rate is also taken into account, using the correction proposed by Delafosse et al. (2011). The estimate of the local turbulent energy dissipation was found to be the same irrespective of the fluctuation velocity component that was taken for calculating the energy spectrum. This accords with the scalar character of the dissipation rate. The method also enables an estimate to be made of the integral length scale components.

remaining velocity gradients have to be estimated using some of the relationships proposed in the literature, which are based on an assumption of isotropy. Homogeneous and fully isotropic turbulence is usually assumed, and then the dissipation rate is estimated from measurements of the velocity gradient in one direction only, using the following equation:

Sharp and Adrian [3] investigated the local isotropy condition in a vessel 150 mm in diameter agitated by a Rushton turbine in a region surrounding the blade tips, using the 2-D PIV method. They concluded that the type of assumption of isotropy used for estimating unknown velocity gradients has a significant effect on the estimate of the dissipation rate. The results exhibit deviation of approx. 30—50% between the individual assumptions used by the authors for estimating the velocity gradient. The gap between the local turbulence and the 3D isotropic state in the impeller stream region in a mixing tank stirred by a Rushton turbine was also investigated in [4]. The authors developed a method based on tensorial analysis for quantifying the level of anisotropy. Delafosse et al. [2] tested assumptions of local isotropy in the impeller discharge in a vessel

stirred by an axial Mixel TTP impeller. As expected, they found that the turbulence in the impeller discharge is far from isotropy.

where q is total turbulent kinetic energy, E(k) is a three-dimensional energy spectrum density function, and k is wave number. Kolmogorov [5] derived in the inertial sub-range the following form of the spectrum function, known as the Kolmogorov —5/3 power law:

where E(k) is the three-dimensional energy spectrum, Ar-3d is a constant, and k is a wave number. According to Kolmogorov, the constant ^IR-3D takes a value of1.5.

In our previous work [13], we investigated the hydrodynamics and the flow field in a bulk zone under the impeller in a mechanically agitated vessel T = 300 mm in inner diameter stirred by a Rushton turbine using the 2-D time-resolved PIV (2-D TR PIV). The selected investigated point was relatively far from the impeller and outside the impeller discharge flow, so the authors expected the local isotropic state defined on the length-scale level corresponding to the integral length scale to be an equality of the fluctuation velocity components. However, this expectation was not confirmed. We found that the axial rms fluctuation velocity was approx. one half of the radial component. Further, the energy dissipation rate was estimated using a one-dimensional approach. The energy dissipation rate estimated using the one-dimensional approach was found not to be the same in each direction.

The aim of this paper is to propose a simple method for estimating the local turbulent energy dissipation rate from the isotropic dissipation rate estimated using energy spectrum function fitting. We assume a local state of isotropy defined on the length-scale level corresponding to the integral length scale to be an equality of the fluctuation velocity components. The proposed approach is based on the following idea: first, estimate the local dissipation rate under the assumption of local isotropy; second, correct this value onto the actual state of anisotropy defined by the fluctuation velocity components. Since the turbulent energy dissipation rate is a scalar property, the estimated local dissipation rate should be independent of the direction of measurement. The method proposed here was tested on data obtained by 2-D time-resolved PIV.

On the basis of dimensional analysis, under the assumption of equilibrium between the production and dissipation of turbulent kinetic energy, Batchelor [14] derived the following widely-used expression for the local turbulent energy dissipation rate per unit mass s in a stirred tank:

Taking into account the anisotropy of the flow, all three components of velocity are needed, and the following equation is often used to estimate turbulent kinetic energy q3D for anisotropic flow:

where q3D is the turbulent kinetic energy for anisotropic flow, ta is an integral time scale, Uj are fluctuation velocities in the ith direction of the Cartesian coordinate system, and u3D is the resultant fluctuation velocity. Cq/T is a proportionality constant assumed to be equal to 1.

The resultant fluctuation velocity u3D can be