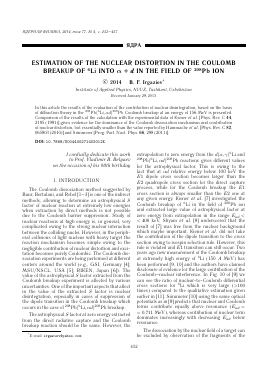 In this article the results of the evaluation of the contribution of nuclear disintegration, based on the basis of diffraction theory in the 208Pb(6Li, ad)208Pb Coulomb breakup at an energy of 156 MeV is presented. Comparison of the results of the calculation with the experimental data of Kiener et al. [Phys. Rev. C 44, 2195 (1991)] gives evidence for the dominance of the Coulomb dissociation mechanism and contribution of nuclear distortion, but essentially smaller than the value reported by Hammache et al. [Phys. Rev. C 82, 065803 (2010)] and Summerer[Prog. Part. Nucl. Phys. 66, 298 (2011)].

I cordially dedicate this work to Prof. Vladimir B. Belyaev on the occasion of his 80th birthday

The Coulomb dissociation method suggested by Baur, Bertulani, and Rebel [ 1 —3] is one of the indirect methods, allowing to determine an astrophysical S factor of nuclear reaction at extremely low energies when extraction by direct methods is not possible due to the Coulomb barrier suppression. Study of nuclear reactions at high energy is, in general, very complicated owing to the strong nuclear interaction between the colliding nuclei. However, in the peripheral collisions of light nucleus with heavy target the reaction mechanism becomes simple owing to the negligible contribution of nuclear distortion and excitation becomes purely Coulombic. The Coulomb dissociation experiments are being performed at different centers around the world (e.g., GSI, Germany [4]; MSU/NSCL, USA [5]; RIKEN, Japan [6]). The value of the astrophysical S factor extracted from the Coulomb breakup experiment is affected by various uncertainties. One of the important aspects that affect in the value of the extracted S factor is nuclear disintegration, especially in cases of suppression of the dipole transition in the Coulomb breakup which occurs in the case of208Pb(6Li, ad)208Pb breakup.

The astrophysical S factor at zero energy extracted from the direct radiative capture and the Coulomb breakup reaction should be the same. However, the

extrapolation to zero energy from the d(a,Y)6Li and 208Pb(6Li,ad)208Pb reactions gives different values for the astrophysical factor. This is owing to the fact that at ad relative energy below 100 keV the E1 dipole cross section becomes larger than the E2 quadrupole cross section for the direct capture process, while for the Coulomb breakup the E1 cross section is always smaller than the E2 one at any given energy. Kiener et al. [7] investigated the Coulomb breakup of 6Li in the field of 208Pb ion and extracted large value of astrophysical factor at zero energy from extrapolation in the range Ead < < 400 keV. Shyam et al. [8] underscored that the result of [7] was free from the nuclear background which maybe important. Kiener et al. did not take the contribution of the dipole transition to the cross section owing to isospin selection rule. However, this rule is violated and E1 transition can still occur. Two years ago new measurement of the Coulomb breakup at extremely high energy of 6Li (150 A MeV) has been performed [9, 10] and the authors have claimed disclosure of evidence for the large contribution of the Coulomb—nuclear interference. In Fig. 10 of [9] we can see the ratio of nuclear-to-Coulomb differential cross sections for 6Li which is very large (>100 times) compared to the qualitative estimation given earlier in [11]. Summerer [ 10] using the same optical potentials as in [9] predicts that nuclear and Coulomb terms contribute equally above resonance (Ead = = 0.711 MeV), whereas contribution of nuclear term dominates increasingly with decreasing Ead below resonance.

reaction at forward scattering angles. This extremely small angle corresponds to the impact parameter essentially larger than the sum of the nuclear radii of the projectile and the target. For instance, in the experiments [7] the angle was varied in the range 2°—6° corresponding to the impact parameter in the range 20—65 fm. However, the dipole transition in the 6Li Coulomb breakup is suppressed as in the d(a,j)6Li radiative capture, therefore, we can expect that the nuclear dissociation gives relatively large contribution to the 6Li Coulomb breakup cross section.

In the semiclassical theory the amplitude of transition is inversely proportional to the impact parameter and the velocity of collision. Therefore we can constrain ourselves by the first-order amplitude for the Coulomb excitation of fast nucleus at sufficiently small scattering angles. Among higher-order effects, we note the three-body Coulomb effects in the final state which were discussed in [12, 13].

For a description of the scattering and reactions of high-energy light particles, such nucleons, deuterons, alpha particles, and lithium on medium and heavy nuclei the optical and folding potentials are used. However, the optical potential contains many parameters and it is difficult to correctly identify these parameters due to their strong energy dependence. In this paper we consider the nuclear dissociation 208pb(6Li,ad)208Pb using a diffractive dissociation theory [14], which from our point of view is the easiest for description of this reaction and contains a small number of parameters. The diffraction splitting is characterized by a sharp angular distribution of reaction products. The effective angle equals to kR, where k is a wave number of the 6Li projectile and R is the size of208Pb.

Our treatment is used for the complete analysis of the experiments, which were performed with a 156-MeV 6Li beam at the Karlsruhe Isochronous Cyclotron [7]. This reaction is relevant to the d(a, y)6Li radiative capture which is one of the important nucleosynthesis reactions. When the collision energy is sufficiently large, we can consider the motion of the center of mass of a projectile along a classical trajectory. At small scattering angles of the projectile the value of the impact parameter would be so large that at such distances mostly the Coulomb interaction between the projectile and the target would be significant. The nuclear breakup does take place, but it mainly occurs near the target surface where the nuclear potential of interaction falls down quickly. At small scattering angles and high-energy collisions, the most appropriate method of estimation of the nuclear breakup is the diffraction theory as mentioned above.

On the basis of the developed method we desire to make the analysis of the data presented in [7] and to explore the possibility of extraction of the astro-physical S factor from 208Pb(6Li,ad)208Pb reaction by comparison of our results with the experimental data of [7].

The triple cross section of the pure Coulomb breakup from the ground state with angular momentum and parity Jf = 1+ of 6Li to the final state with relative momentum k of the a particle and deuteron having reduced mass ¡iad can be expressed in terms of the excitation amplitude afi from the initial state \i) to the final state \f), calculated in the semiclassical approach (details of the numerical calculations of the cross sections a reader can find in [15]):

The elastic Coulomb cross section da^/d^u is calculated classically for the scattering of the c.m. of the projectile 6Li.

where q = ki — kf, ki is the initial momentum of 6Li and kf is the final momentum of the center-of-mass of the ad system after dissociation; \i) = (r) and \ f) = ^k(r) are the wave functions of ad in the bound and continuum states, respectively; b is impact parameter of ad system; w(b, r) is the total profile function for the ad system. We may take the vector q to be orthogonal to the momentum vector ki due to high energy collision and small scattering angle (q ~ ki0, where 6 is scattering angle). The total profile function

is composed of the profile functions of fragments. The third term in Eq. (3) describes the double-scattering

The total cross section is considered as the sum d3at _

In Eq. (6) the Coulomb—nuclear interference term is neglected. We note that the Coulomb and nuclear breakup are calculated using different approaches, therefore we cannot calculate the interference term. Even if both Coulomb and nuclear breakup amplitudes were calculated using the same approach, one expects the interference term to be small (see for example the calculation in the DWBA method used by Bertulani and Hussein, Figs. 4 and 5 in [11]). We further note that at small scattering angles considered in this calculation, the elastic Coulomb scattering cross section calculated cla