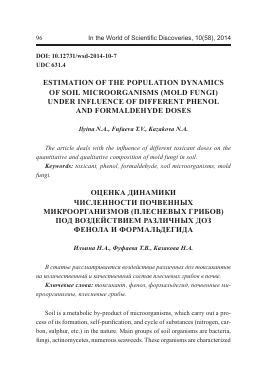 The article deals with the influence of different toxicant doses on the quantitative and qualitative composition of mold fungi in soil.

Soil is a metabolic by-product of microorganisms, which carry out a process of its formation, self-purification, and cycle of substances (nitrogen, carbon, sulphur, etc.) in the nature. Main groups of soil organisms are bacteria, fungi, actinomycetes, numerous seaweeds. These organisms are characterized

Having a diverse enzyme system, which allows this biota component to transform various natural and unnatural compounds; unique adaptation mechanism, which determines fast adjustment to new living conditions; high rate of reproduction, which enables the colonization of the incoming substrate; microorganisms are capable of performing environment protective functions in the biosphere, preservation of its homeostasis.

Moreover, microorganisms are used as the environment status indicator. Man-caused impact results in morphological changes of microbial population, kinetics of their growth and development, structural transformations of microbial communities, biochemical activity. Microbial responses to a man-induced impact are exhibited rapidly and quite distinctly, enabling to determine most vulnerable environmental zones within a short time, forecast their status in case of persistence or removal of the man-induced impact [1].

The goal of this research is to study population of mold fungi in contaminated soil samples.

Soil selection and preparation for the study

Contaminant preparation for the study

The contaminant was preliminary diluted in a solvent (in water, acetone, or alcohol), and which solvent volume should be the same for all the doses. Then, a dilution of toxicants equal to 10, 100 and 1000 doses of MPC was prepared.

Introduction of chemical production waste into the soil

Concentrations of chemical substances under study were introduced into soils by means of a sprayer and thoroughly stirred. Control and test incubation vessels were in the same temperature mode (+ 20-25°C), lighting and moisturizing (60% of total moisture-retention capacity) during the entire experiment.

Estimation of the population dynamics of soil microorganisms

Population of microorganisms in the soil containing various concentrations of the contaminant was assessed by serial dilutions of soil suspension on the 5th and 30th days [2]. Therefore, 1 g of control and test soil samples were selected and introduced into flasks with 100 ml physiological solution. The resulted suspended solid was thoroughly shaken for 15-20 minutes. After precipitation of large soil particles, 1 ml suspended solid was collected from each flask for dilutions, which were prepared in four sterile test tubes with 9 ml physiological solution.

Aim of the study of the contaminated soil samples was to assess population of heterotrophic bacteria, actinomycetes and mold fungi, as these very groups provide for self-purifying capability of soil and participate in soil-forming processes.

Inoculations were cultivated in the incubator at 25 0C for 2 days for extracting heterotrophics, and 5-7 days for extracting actinomycetes and mold fungi. Upon incubation of inoculations, quantity of the grown colonies was determined and CFUs were estimated per 1 g of soil. We tool quantity of microbes contained in one gram of the control soil (without the contaminant) as 100%. Population dynamics of microorganisms in the soil with xenobiotics was depicted as a percentage in ratio to the control.

With all the diversity of microorganisms, frequency of occurrence of certain decomposer strains in the soil is relatively low. Adaptation usually takes very much time. That is why soil, being in a long contact with the compounds and cumulative culture method, was used to extract required microorganisms. For accumulation, elective conditions were created using nutritional media with high contaminant concentrations. Therefore, 1 g of test samples, which contained 10, 100 and 1000 doses of pesticide MPC for 30 days, were collected from the soil and were placed into flasks with a nutrient broth and a pesticide in the same concentrations. They were cultivated for 2-5 days at 25 0C and were sown onto nutritional media.

Subcultivation of cultures on media with increasing concentrations of chemical substances

By means of multiple passages of cultures from a liquid nutrient medium with a toxicant and further sowing into a solid medium, dominant (cumulative) strains may be extracted. Frequent passages onto media with increased contaminant concentrations inhibit growth of sensitive organisms. In such case, natural selection takes place not only among resistant strains, but among dissociants of the same culture capable of reproduction at high concentrations of chemical substances.

After every fifth day of submerged cultivation of microorganisms in a liquid medium, meat-peptone broth (MPB) with a pesticide, the culture was subculti-vated onto a fresh nutrient GRM-agar with addition of a pesticide in a concentration 10 times exceeding the previous one (100, 1000 and 10000 MPC). Then, the grown colonies were washed from the agar surface and were again cultivated in a nutrient broth with addition of the substance under study in an increased dose. Microbial isolates from the last passage were used for further experiments. Obtaining pure cultures of decomposer microorganisms The important prerequisite for further microbiological work was isolation of certain microbial strains and obtaining pure cultures for study of individual destructive properties.

Pure cultures were obtained by means of mechanical separation on the solid nutrient medium surface (streaking with loop burning) [5]. Therefore, the culture suspension was applied by the inoculation loop on a small sector of the solid medium in a petri dish. After the loop burning, 2-3 perpendicular lines were drawn from the inoculated sector to the dish edge, and then the loop was burned again, and zigzag streaks were drawn through perpendicular lines of the inoculated culture. After cultivation during 1-2 days, growth of isolated colonies was observed along the zigzag streak. Separate colonies were checked for purity by means of microscopy and were sown onto a slope nutrient agar for cultivation.

As in aerobic conditions the first biodegradation stage of xenobiotics is represented by oxidative metabolism reactions catalysed by various oxidore-ductases, principal of which are dehydrogenases, discovery of these very enzymes in microorganisms witnesses to destructive properties of the culture. In order to find bacteria with dehydrogenase activity, 5-% aqueous TTC solution was used, it was added into M9 medium (composition, g: Na2HPO4- 6.0; KH2PO4-3.0; NaCl - 0.5; NH4CL - 1.0; distilled water 1000 ml, 2% starvation agar) in 1% of the medium volume. Microorganisms' ability to decompose the compound was evidenced by formation of the recovered triphenyl-phosphine. This sign served as a basis for selection of decomposer strains.

Decomposer strains were searched among microorganisms extracted from the last passage on the xenobiotic medium, i.e. adapted to high concentrations of the substance under study.

For sowing, we used 0.1 ml suspension of the pure bacterial culture, prepared according to the opacity standard per 5 units, which was poured onto the solid medium surface M9 in petri dishes and rubbed with a spreader.

Bacterial suspension was inoculated onto the media:

- M9 + 1000 MPC xenobiotic + 1% TTC - determining an option to use the substance as a single carbon and energy source;

After incubation of inoculations in the incubator, presence or absence of the microbial growth and stained areas around the colonies were noted. Ch