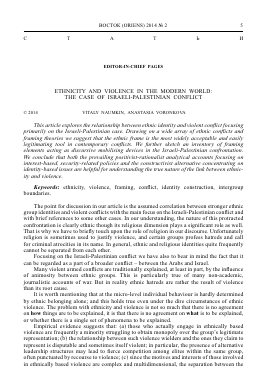 ETHNICITY AND VIOLENCE IN THE MODERN WORLD: THE CASE OF ISRAELI-PALESTINIAN CONFLICT

This article explores the relationship between ethnic identity and violent conflict focusing primarily on the Israeli-Palestinian case. Drawing on a wide array of ethnic conflicts and framing theories we suggest that the ethnic frame is the most widely acceptable and easily legitimating tool in contemporary conflicts. We further sketch an inventory of framing elements acting as discursive mobilising devices in the Israeli-Palestinian confrontation. We conclude that both the prevailing positivist-rationalist analytical accounts focusing on interest-based, security-related policies and the constructivist alternative concentrating on identity-based issues are helpful for understanding the true nature of the link between ethnicity and violence.

The point for discussion in our article is the assumed correlation between stronger ethnic group identities and violent conflicts with the main focus on the Israeli-Palestinian conflict and with brief references to some other cases. In our understanding, the nature of this protracted confrontation is clearly ethnic though its religious dimension plays a significant role as well. That is why we have to briefly touch upon the role of religion in our discourse. Unfortunately religion is sometimes used to justify violence, and certain groups profess hatreds and call for criminal atrocities in its name. In general, ethnic and religious identities quite frequently cannot be separated from each other.

Focusing on the Israeli-Palestinian conflict we have also to bear in mind the fact that it can be regarded as a part of a broader conflict - between the Arabs and Israel.

Many violent armed conflicts are traditionally explained, at least in part, by the influence of animosity between ethnic groups. This is particularly true of many non-academic, journalistic accounts of war. But in reality ethnic hatreds are rather the result of violence than its root cause.

Empirical evidence suggests that: (a) those who actually engage in ethnically based violence are frequently a minority struggling to obtain monopoly over the group's legitimate representation; (b) the relationship between such violence wielders and the ones they claim to represent is disputable and sometimes itself violent; in particular, the presence of alternative leadership structures may lead to fierce competition among elites within the same group, often punctuated by recourse to violence; (c) since the motives and interests of those involved in ethnically based violence are complex and multidimensional, the separation between the

contending groups is far from total, even though the "master cleavage" used to analyse such a conflict is ethnicity. In fact, ethnicity may simply form one of a number of facets and by no means the most significant. Is ethnically based violence more properly described as political with an identifiable ethnic dimension?

Some have argued that the violence we witness in so-called ethnic conflicts and wars is first and foremost a criminal endeavour committed by small groups of thugs being instrumentalised by opportunist politicians. The same can be equally applied to religious conflicts. By their vicious and arbitrary actions these politicians take the moderate majority of their own groups as hostage while ethnicity works as a mere ordering device. For example, for John Mueller, "insofar as it is taken to imply a war of all against all and neighbour against neighbour ... ethnic war essentially does not exist" [Mueller, 2000, p. 42]. However, notwithstanding the popularity of the theme of the privatisation of violence where actions on the ground are largely de-politicised and similar to organized crime, we should not ignore the persistent importance of ethnic cleavages. More of that, such interpretation is especially inaccurate when applied to violent conflicts, sometimes with both state and non-state actors involved, when possession of land is at stake.

Such are, for instance, the Palestinian-Israeli, Georgian-Abkhazian or Armenian-Azerbaijani conflicts. In all these cases the issue of "ethnic" refugees has probably become one of the most serious consequences of wars and the most difficult part of conflicts to resolve. Though many conflicting ethnic groups claim that they cannot again live together after the awful atrocities that had been committed in the course of wars between them, even in these cases we can witness quite the opposite. In Abkhazia about 50 thousand Georgian refugees returned home after the war, and the reason why the rest approximately 150 thousand are not able to come back is not interethnic hatreds that prevent cohabitation but the resolute desire of the Abkhazian authorities not to allow the return to the pre-war situation when the Abkhazians were a minority in "their own" country, around 17 percent. By the way, it is exactly the Georgian-Abkhazian conflict where a great part of violence was committed by militias and criminal gangs.

Even though we might accept the claim that ethnic alignment, as well as the confessional one, is far from being an inherited disposition of human beings, ethnic identities do seem to matter in the turn to violence. For example, Stathis Kalyvas and Nicholas Sambanis find in their analysis of the Bosnian civil war that "ethnic identity appears to be a good predictor of the side that an individual was likely to join" [Kalivas and Sambanis, 2005, p. 214]. Many have emphasised in case studies and comparative analyses how even where ethnic identification plays a role in violent conflict, it is a mistake to conclude that ethnic differences cause it. The same is true about religious identification. In the Balkans, for example, there is ample evidence that cooperation and friendship across ethnic/religious lines was perfectly common before the war, and even on the very eve of the conflict the most prevalent attitude vis-à-vis people from the other group was not one of hostility. The same can be said about Arabs and Jews in the Middle East prior to the Jewish colonisation of Palestine: Jews in the Middle Ages were even seeking safe haven in the Arab Caliphate escaping from persecution in Europe. Still, it could be argued that ethnic differences matter to the extent that they are manipulated by political elites whose goals are served by a state of violence and by defining the political space in ethnic terms. Paul Brass [e.g., Brass, 2003] shows that Indian elites engaged in contests for power find it in their interest to publicly frame violent incidents as 'ethnic' and 'communal', an interpretation that is then accepted by the public. But in this context we need to understand why the public so readily credits elite framings.

Ethnic identity construction functions as an (informal) boundary-generating device. The political salience of ethnic boundaries depends largely on them acquiring a subjective character - being recognised as important and acted upon by a sufficiently large number of participants. Overlapping cultural practices and fuzzy ethnic markers make it particularly difficult to identify and define ethnic boundaries. Hence ethnic categorisation is always

also connected, to lesser or greater degree, with the politics of ethnic purification which often entails resorting to violence. Any self-definition entails a definition of "the other" which becomes potentially excluded from access to symbolic and material resources (which "rightfully belong" to a given community). When the possession of land is the matter of dispute it makes this opposition much stronger. The process of polarisation can also involve at least one side defining its security in such a way that is it incompatible with the other side's security. As issues become "securitised", they become removed from the realm of legitimate discussion and bargaining as in the case of the Palestinian-Israeli conflict. Here the difference between state and non-state actors plays a role. As Asaf Siniver noted, on the one hand, "constructed identities of the state (and, by extension, of the enemy, define the political boundaries of the game, as leaders are sanctioned and constrained by a collective memory", on the other hand, the state's interaction with the outside world in its turn "shapes and defines the boundaries of collective memory" [Siniver, 2012, pp. 38-39].

If we agree on the existence of a link between ethnicity and violence it still requires appropriate labelling. Should we understand this link not as involving conflict between autonomous and unified ethnic groups, but as violent social interaction which is framed as "ethnic"? It could be argued that today the ethnic frame is the most widely acceptable and easily legitimating (leave aside the confessional one that sometimes goes hand in hand with the ethnic frame), so that it suggests itself to actors and analysts alike generating a certain bias in the ethnic direction. Violence that attracts public attention is usually accompanied by struggles over its meaning and its causes. Because of their crucial function in validating radical claims, these conflicts over definitions are at least as important for the continued mobilisation of the group as the violent acts themselves. The labelling of violence as "ethnic" implies that ethnicity