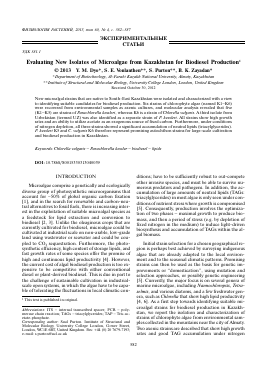 New microalgal strains that are native to South-East Kazakhstan were isolated and characterized with a view to identifying suitable candidates for biodiesel production. Six strains of chlorophyte algae (named K1-K6) were recovered from environmental samples as axenic cultures, and molecular analysis revealed that five (K1-K5) are strains of Parachlorella kessleri, whereas K6 is a strain of Chlorella vulgaris. A third isolate from Uzbekistan (termed UZ) was also identified as a separate strain of P. kessleri. All strains show high growth rates and an ability to utilize acetate as an exogenous source of fixed carbon. Furthermore, under conditions of nitrogen depletion, all three strains showed a significant accumulation of neutral lipids (triacylglycerides). P. kessleri K5 and C. vulgaris K6 therefore represent promising autochthon strains for large-scale cultivation and biodiesel production in Kazakhstan.

Microalgae comprise a genetically and ecologically diverse group of photosynthetic microorganisms that account for ~50% of global organic carbon fixation [1], and in the search for renewable and carbon-neutral alternatives to fossil fuels, there is increasing interest in the exploitation of suitable microalgal species as a feedstock for lipid extraction and conversion to biodiesel [2, 3]. Unlike the oleaginous crops that are currently cultivated for biodiesel, microalgae could be cultivated at industrial scale on non-arable, low-grade land using wastewater or seawater and could be coupled to CO2 sequestration. Furthermore, the photo-synthetic efficiency, high content of storage lipids, and fast growth rates of some species offer the promise of high and continuous lipid productivity [4]. However, the current cost of algal biodiesel production is too expensive to be competitive with either conventional diesel or plant-derived biodiesel. This is due in part to the challenge of sustainable cultivation in industrial-scale open systems, in which the algae have to be capable of tolerating the fluctuations in local climatic con-

1 This text is published in original.

ditions; have to be sufficiently robust to out-compete other invasive species, and must be able to survive numerous predators and pathogens. In addition, the accumulation of large amounts of neutral lipids (TAGs: triacylglycerides) in most algae is only seen under conditions of nutrient stress where growth is compromised [5]. Consequently, production involves the optimization of two phases - maximal growth to produce biomass, and then a period of stress (e.g. by depletion of fixed nitrogen in the medium) to induce light-driven biosynthesis and accumulation of TAGs within the algal biomass.

Initial strain selection for a chosen geographical region is perhaps best achieved by surveying indigenous algae that are already adapted to the local environment and to the seasonal climatic patterns. Promising strains can then be used as the basis for genetic improvements or "domestication", using mutation and selection approaches, or possibly genetic engineering [5]. Currently, the major focus is on several genera of marine microalgae, including Nannochloropsis, Tetra-selmis, and various diatoms, and a few freshwater genera, such as Chlorella that show high lipid productivity [4, 6]. As a first step towards identifying suitable microalgal strains for biodiesel production in Kazakhstan, we report the isolation and characterization of strains of chlorophyte algae from environmental samples collected in the mountains near the city ofAlmaty. Two axenic strains are described that show high growth rates and good TAG accumulation under nitrogen

DNA sequence derived from the chloroplast genes tufA (a) or rbcL (b) were aligned using CLUSTALW2 with equivalent sequences for known species of chlorophyte algae. Note: K6 and UZ failed to produce rbcL PCR product.

stress. One is identified as a new strain of Parachlorella kessleri and the other a strain of Chlorella vulgaris.

Soil and water samples were collected in September 2011 from the Zailiysky Alatau gorge in the Tian Shan mountain range south of Almaty, Kazakhstan, and used to inoculate liquid Tamiya medium [7] in

10 mL translucent sample bottles. After three weeks of incubation at room temperature and in natural light, aliquots were plated by streaking on Petri dishes containing solid Tamiya medium. Green material that appeared following several weeks of incubation in the light was re-streaked to fresh medium containing the antibiotic ampicillin (100 ^g/mL) to inhibit the growth of contaminating bacteria. Isolated green col-

onies were picked and re-streaked to fresh medium, and their axenic state was determined by plating on the rich medium, Meat Peptone Agar to encourage bacterial growth [8]. Bright-field and fluorescence microscopy was carried out using an EVOS fl digital fluorescent microscope ("PEQLAB", Germany). For the fluorescence imaging, the microscope was fitted with an RFP light cube (excitation 531/40 nm) and a 593/40 nm emission filter.

For molecular analysis, total genomic DNA was isolated from single fresh colonies, using the Chelex method described in [9], in which cells are lysed in 50% ethanol and cell debris is removed by the addition of 5% Chelex-100 resin, followed by boiling for 5 min, briefly centrifuging, and finally recovering the supernatant containing DNA. For PCR analysis, 2 ^L of the supernatant was used in a standard 25-cycle reaction using Phusion DNA polymerase ("New England Biolabs", United States) according to the manufacturer's recommendation. Primer pairs used were as recommended by Hall et al. [10] as follows: rbcL.M28F and rbcL.M1390R; tufA.F and tufA.R; ITS1 and ITS4. PCR products were purified using ion-exchange spin columns ("Qiagen", Germany), quantified using a Nanodrop spectrometer, and sent for commercial sequence determination with the forward primer (rbcL.F or tufA.F) as the sequencing primer. DNA sequence was processed using MacVector software and used in phylogenic analysis with corresponding rbcL or tufA sequences obtained by the Purton lab from known chlorophyte species, or downloaded from the GenBank nucleotide database (www.ncbi. nlm.nih.gov). Alignment and phylogram construction was carried out using CLUSTALW2 (www.ebi.ac. uk/Tools/msa/clustalw2).

Growth and lipid analysis was carried out by growing the strains in liquid TAP (Tris-acetate-phosphate) medium [11] at 25°C and continuous white light of approximately 50 ^mol/(m2 s), with gentle agitation (100 rpm). For the induction of lipid accumulation,

Growth of each culture was monitored by measuring the optical density at 750 nm. —•— K5

Lipid accumulation under nitrogen-depleted conditions was assessed by fluorescence spectroscopy using the fluorescent dye, Nile red [12]. Strains were grown for five days in nitrogen-replete and nitrogen-limited TAP. Nile red staining was performed using Nile red at a final concentration of 2 ^g/mL in 25% (v/v