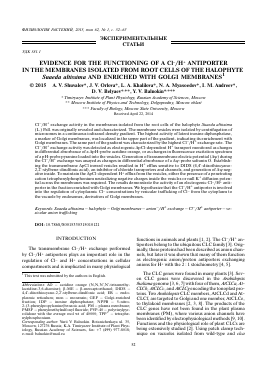 Cl-/H+ exchange activity in the membranes isolated from the root cells of the halophyte Suaeda altissima (L.) Pall. was originally revealed and characterized. The membrane vesicles were isolated by centrifugation of microsomes in a continuous iodixanol density gradient. The highest activity of latent inosine diphosphatase, a marker of Golgi membranes, was localized in the upper part of the gradient, indicating its enrichment with Golgi membranes. The same part of the gradient was characterized by the highest Cl-/H+ exchange rate. The Cl-/H+ exchange activity was detected as electrogenic ApCl-dependent H+ transport monitored as changes in differential absorbance of a ApH-probe acridine orange, or as changes in fluorescence excitation spectrum of a pH-probe pyranine loaded into the vesicles. Generation of transmembrane electric potential (Ay) during the Cl-/H+ exchange was assayed as changes in differential absorbance of a Ay-probe safranin O. Establishing the transmembrane ApCl inward vesicles resulted in H+ efflux sensitive to DIDS (4,4'-diisothiocyano-2,2'-stylbene-disulfonic acid), an inhibitor of chloride transporters and channels, and generation of Ay negative inside. To maintain the ApCl-dependent H+ efflux from the vesicles, either the presence of a penetrating cation tetraphenylphosphonium neutralizing negative charges inside the vesicles or null K+ diffusion potential across the membranes was required. The results demonstrate the activity of an electrogenic Cl-/H+ antiporter in the fraction enriched with Golgi membranes. We hypothesize that the Cl-/H+ antiporter is involved into the regulation of cytoplasmic Cl- concentrations by vesicular trafficking of Cl- from the cytoplasm to the vacuole by endosomes, derivatives of Golgi membranes.

functions in animals and plants [1, 2]. The Cl/H+ antiporters belong to the ubiquitous CLC family [3]. Originally, these proteins had been described as anion channels, but later it was shown that many of them function as electrogenic anion/proton antiporters exchanging anions for H+ with the 2 . 1 stoichiometry [4, 5].

The CLC genes were found in many plants [3]. Seven CLC genes were discovered in the Arabidopsis thaliana genome [3, 6, 7] with four ofthem, AtCLCa, At-CLCb, AtCLCc, and AtCLCg encoding the tonoplast proteins. Two Arabidopsis CLC members, AtCLCd and At-CLCf, are targeted to Golgi and one member, AtCLCe, to thylakoid membranes [2, 3, 8]. The products of the CLC genes have not been found in the plant plasma membranes (PM), where various anion channels have been identified by electrophysiological methods [9, 10]. Functions and the physiological role of plant CLCs are being extensively studied [2]. Using patch clamp technique on vacuoles isolated from wild-type and clca

knock-out mutant plants, de Angeli et al. [5] showed that AtCLCa functions as a NO3/H+ antiporter and is implicated into the compartmentation of N O- to the vacuole [5]. AtCLCb, a close relative of AtCLCa, was shown to be capable of conducting outwardly rectifying anionic current when expressed in oocytes [11]. The current was the largest in the presence of nitrate and was accompanied by the H+ counter transport, arguing in favor of AtCLCb being NO-/H+ antiporter as well.

Unlike AtCLCa and AtCLCb, another tonoplast protein AtCLCc appears to transport Cl-. AtCLCc was shown to be strongly expressed in stomatal guard cells. The disruption of the AtCLCc gene affected the physiological responses directly related to the transport of chloride ions across the vacuolar membrane. The Cl/H+ content in guard cells of the AtCLCc mutants was several times lower than in wild type, and the stomata opening in response to light was reduced in the mutants [12]. Compared to wild-type plants, the mutants were more sensitive to NaCl.

Functions and physiological role of AtCLCg, a tonoplast protein, AtCLCd and AtCLCf both targeted to Golgi, and AtCLCe localized in thylakoid membranes are poorly studied in comparison with the tonoplast proteins AtCLCa, AtCLCb, and AtCLCc.

In addition to NO- and Cl- compartmentation, the physiological role ofA-/H+ antiporters is to compensate the positive charges resulting from electro-genic H+-ATPase operation in organelle membranes. The H+ transport into acidic compartments by the H+-ATPases leads to membrane hyperpolarization that inhibits H+-ATPases and thus retards the compartment acidification. The electrogenic A/H+ exchange via the antiporter abolishes this inhibition and thereby maintains the luminal acidification. This mechanism is involved in the maintenance and tight control of acidic pH in various intracellular compartments in animal cells [1] and was proposed to work in plants [2].

Little is known about the role of Cl/H+ antiporters in plant salinity tolerance. The data in this respect have been reported in the above-mentioned paper on AtCLCc [12]. GmCLC1, a tonoplast-localized Cl-transporter from soybean, was shown to be involved into Cl- accumulation in vacuoles. This transporter was shown to alleviate NaCl stress when expressed in BY-2 tobacco cells [13].

The regulation of Cl- concentrations in the cytoplasm is likely to be a task of particular importance for plants growing on salt-affected soils. In the present study, we isolated a membrane fraction enriched with Golgi membranes from the roots of the halophyte Suaeda altissima and demonstrated the electrogenic Cl/H+ exchange in isolated membranes. These data argue in favor of Cl/H+ antiporter(s) functioning in Golgi of S. altissima root cells.

Plant material. Seeds of Suaeda altissima (L.) Pall. were collected from the plants in their natural habitat, the shore of the salt lake Elton in the Volgograd region, Russia, and germinated in moist sand. Three-week-old seedlings were potted in 3-L vessels (four plants per vessel) in aerated nutrient solution of Robinson and Downton [14] supplemented with 100 mM NaCl. The further growth of S. altissima occurred in a climatic chamber at 24°C and light intensity of 150 W/m2 from high pressure sodium vapor lamps (Reflux DNAZ-400, Russia) with a 16-h photoperiod.

Isolation of the partially purified microsomes. All

Golgi-enriched fraction isolation was conducted by membrane flotation in a continuous iodixanol (Opti-PrepTM, "Sigma", United States) density gradient. The 0-30% iodixanol gradient in the medium B in volume of10 mL was prepared in 13-mL centrifuge tubes. The partially purified microsomes (5-6 mg of membrane protein in 800 |L) was mixed with 1200 |L of the solution containing 53.5% iodixanol and all components of the medium B, so that the concentration of iodixanol in the microsome suspension was brought to 32%. The microsome suspension was placed at the bottom of the tubes under the iodixanol gradient. The gradients were centrifuged at 240 000 g for 1.5 h (Beckman SW 40 rotor). The 0.5-mL fractions were collected from the gradient upper part, which contained membranes (fig. 1a), and analyzed for their membrane marker activities, Cl/H+ exchange activity, and protein contents.