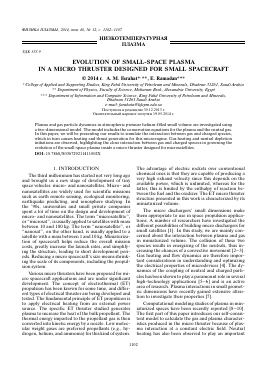 Plasma and gas particle dynamics in atmospheric pressure helium-filled small volume are investigated using a two-dimensional model. The model includes the conservation equations for the plasma and the neutral gas. In this paper, we will be presenting our results to simulate the interaction between gas and charged species, which in turn causes heating and thrust generation for this microengine. Gas heating and neutral depletion initiations are observed, highlighting the close interaction between gas and charged species in governing the evolution of the small-space plasma inside a micro thruster designed for microsatellites.

The third millennium has started not very long ago and brought us a new stage of development of tiny space vehicles: micro- and nanosatellites. Micro- and nanosatellites are widely used for scientific missions such as earth remote sensing, ecological monitoring, earthquake predicting, and ionosphere studying. In the '90s, universities and small private companies spent a lot of time on the design and development of micro- and nanosatellites. The term "microsatellite", or "microsat", is usually applied to satellites with mass between 10 and 100 kg. The term "nanosatellite", or "nanosat", on the other hand, is usually applied to a satellite with a mass between 1 and 10 kg. Miniaturization of spacecraft helps reduce the overall mission costs, greatly increase the launch rates, and simplifying the structure, leading to short development periods. Reducing a micro spacecraft's size means shrinking the scale of its components, including the propulsion system.

Various micro thrusters have been proposed for micro spacecraft applications and are under significant development. The concept of electrothermal (ET) propulsion has been known for some time, and different types of electrical thruster are being developed and tested. The fundamental principle of ET propulsion is to apply electrical heating from an external power source. The specific ET thruster studied generates plasma to increase the heat of the bulk propellant. The thermal energy imparted to the propellant gas is then converted into kinetic energy by a nozzle. Low molecular weight gases are preferred propellants (e.g., hydrogen, helium, and ammonia) for this kind of system.

The advantage of electric rockets over conventional chemical ones is that they are capable of producing a very high exhaust velocity since this depends on the available power, which is unlimited, whereas for the latter, this is limited by the enthalpy of reaction between the fuel and the oxidizer. The ET micro thruster structure presented in this work is characterized by its miniaturized volume.

The micro dischargers' small dimensions make them appropriate to use in space propulsion applications. A number of researchers have investigated the different possibilities of building micro dischargers for small satellites [1]. In this study, we are mainly concerned about the interaction between plasma and gas in miniaturized volume. The collision of these two species results in energizing of the neutrals, thus increasing the chances of a convective movement [2—3]. Gas heating and flow dynamics are therefore important considerations in understanding and optimizing the electrical properties of microdevices [4]. The dynamics of the coupling of neutral and charged particles has been shown to play a paramount role in several high-technology applications [5—6] and is an active area of research. Plasma interactions in small geometric dimensions have recently gained extensive attention to investigate their properties [7].

Computational modeling studies of plasma in miniaturized spaces have been recently reported [8—10]. The first part of this paper introduces our self-consistent model to calculate the gas and plasma characteristics produced in the micro thruster because of plasma interaction at a constant electric field. Neutral heating has also been observed to play an important

role in other types of discharges [11—12]. The second part of this work focuses on the effect of heating the neutral gas on the velocity distributions through a mi-cronozzle and a possible change in the neutrals' density (N), which will directly affect the electron cloud as it depends on the reduced electric field (E/N), which shows that the neutrals' interaction is playing a role in the evolution discharge. Indeed, the E/N relation has experimentally been shown to play a determining role in the evolution of discharges [2, 3].

The present work is a two-dimensional model based on the work of [13] and therefore takes into account the transverse component of the electric field as well as the neutral gas heating. It is interesting to note that both of these effects play a governing role in the evolution of a discharge.

The scheme of micro thruster which used in this study presented in fig. 1. As shown in fig. 1, the micro thruster is made of two opposite plates separated by a distance 0.4 mm; each plate contains dielectric materials sandwiched between a cathode and an anode. The thruster's width is 1.2 mm. The device is filled with atmospheric pressure helium gas initially at 293 K, and a 250 volts potential is applied to the anodes. The gas studied is assumed to be weakly ionized plasma. The neutral dynamics is governed by the microscopic hy-drodynamic equations of a compressible and viscous fluid. Different species can be described by the following conservation equations for electrons, ions, and excited species expressed in an axial symmetric system.

The conservation equations for electrons, ions, and excited species are given by

where: ns is the density of a species s, E is the electric field component normal to the anode, v s, vext are the ionization and excitation frequencies, k is the recombination rate, ^s is the species mobility, Ds is the species diffusion coefficient, n0 is the neutral gas density,

and krmnm, k2mnmn0 represent excited atoms loss due to the escape of radiation and the conversion of metasta-ble atom to metastable molecule.

where: e — elementary charge; s 0 and s r — the vacuum permittivity and relative permittivity of a dielectric material, accordingly; p — the surface charge density and dDB — the one-dimensional Dirac function concentrated at the dielectric surface.

As follows from equation (4) the applied electric field is nonzero only on the dielectric surface.

The neutral gas-plasma mixture density is assumed to satisfy the ideal gas law,

where: P is the total pressure in gas discharge, nn, Tg ,

The potential boundary condition at the dielectric surface is determined using the total surface charge accumulated on the surface. The conservation equation for surface charge density p is given by

where the right-hand side of equation 8 represents the normal component of the total electrons and ions' current densities. No-slip boundary conditions are applied on the flow at solid walls.

The wall conditions are —1 = 0 at the cathode and

cathode, where y is the direction normal to the electrodes.

The finite volume method is used for discretization of the equations 1—4 with the approximation of centered difference. The equations are then solved using the flux-corrected transport (FCT) algorithm [15].

The efficient fast Fourier transform algorithm [16] in the x and y directions is used to solve Poisson's equation (4). A time-splitting approximation has been used with the FCT algorithm such that we follow the motion of a fluid element for one time step in a Lagrangian sense. The FCT algorithm assumes the density i