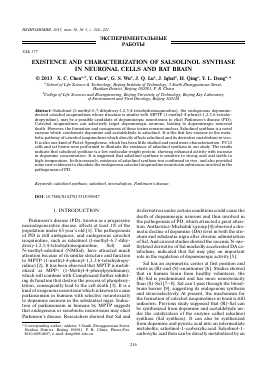 Parkinson's disease (PD), known as a progressive neurodegenerative disease, affects at least 1% of the population under 65 year's old [1]. The pathogenesis of PD is still ambiguous, and endogenous catechol isoquinoline, such as salsolinol (l-methyl-6,7-dihy-droxy-l,2,3,4-tetrahydroisoquinoline, Sal) and N-methyl-salsolinol (NMSal), have attracted much attention because of its similar structure and function to MPTP (1-methyl-4-phenyl-1,2,3,6-tetrahydropy-ridine) [2]. It has been observed that MPTP is metabolized as MPP+ (1-Methyl-4-phenylpyridinium), which will combine with Complexand further inhibiting its function that destroy the process of phosphorylation, consequently lead to the cell death [3]. It is a kind of exogenous neurotoxin which is known to cause parkinsonism in humans with selective neurotoxicity to dopamine neurons in the substantial nigra. Induction of parkinsonism in humans by MPTP suggests that endogenous or xenobiotic neurotoxins may elicit Parkinson's disease. Researchers showed that Sal and

its derivatives under certain conditions could cause the death of dopaminergic neurons and thus involved in the pathogenesis of PD, which attracted a great attention. Antkiewicz-Michaluk's group [4] observed a dramatic decline of dopamine (DA) level in both the stri-atum and substantia nigra after chronic adimistration of Sal. And current studies showed the racemic N-me-thylated derivative of Sal markedly accelerated DA ca-tabolism, indicated that Sal may play an important role in the regulation of dopaminergic activity [5].

Sal has an asymmetric center at first position and exists as (R)-and (S)-enantiomer [6]. Studies showed that in human brain from healthy volunteers, the (R)-Sal is predominant and has more neurotoxicity than (S)-Sal [7—8]. Sal can't pass through the blood-brain barrier [9], suggesting its endogenous synthesis and stereoselectively. At present, the mechanism for the formation of catechol isoquinolines in brain is still unknown. Previous study supposed that (R)-Sal can be synthesized from dopamine and acetaldehyde under the catalyzation of the enzyme called salsolinol synthase (Sal synthase). It can also be synthesized from dopamine and pyruvic acid into an intermediate metabolite, salsolinol-1-carboxylic acid. Salsolinol-1-carboxylic acid then can be directly metabolized by an

unknown enzyme to Sal or at first to 1,2-dehydrosal-solinol and finally reduced to Sal [10—13]. In addition, the putative Pictet-Spengler reaction is a common recognized way of Sal synthesis. Sal is distributed in many areas in rat's basal ganglia, especially highly concentrated in the striatum [14]. However, some researchers are doubtful for the existence of Sal synthase. On the other hand, characteristics of Sal synthase have been reported by few workers [15]. Previously, a series of experiments to confirm the existence of Sal synthase in rat brain have been carried out [16]. Moreover, both ion-exchange and gel filtration chromatography were used for the purification of Sal syn-thase while pH, temperature and isoelectric point were also optimized [17]. As already reported, the Sal synthase is a thermostable enzyme with molecular mass less than 3 kDa. Therefore, it still needed to further discuss whether Sal synthase is a protein, a peptide, or it may be a kind of small compound. To solve this issue, we used two kinds of proteases (protease K and trypsin) to digest the crude enzyme, and then compared the activity of Sal synthase. Furthermore, we developed a PC12-derived cell line in which Sal production can be induced by addition of DA to the culture medium. Besides, microdialysis was used to collect the Sal production after substrate-induced in living rats. The results indicated that the existence of Sal synthase in PC12 cells and rat brains showed that Sal synthase is sensitive to strong acid and stable to high-temperature, suggested it is a thermostable enzyme. These not only supports further study of the isolation and characterization related to the Sal synthase, but also will become a clue for the etiology of PD.

2. MATERIALS AND METHODS 2.1. Chemicals and Substrates

PC12 cell line was obtained from a rat pheochro-mocytoma and maintained as previously reported [18]. PC12 cells can synthesize or secrete and take DA in dopaminergic system. The plates were covered with polylysine for 4 hours before cell culturing, then Dulbecco's modified Eagle's medium (DMEM) was used as medium supplemented with 10% horse serum, 5% fetal bovine serum, 100 U/mL penicillin and 100 ^g/mL streptomycin. The plates were then incubated at 37°C with 5% CO2. After coating with PDL for 4 h, PC12 cells were seeded at a density of 2000 cells/well in 96-well plates with 200 ^L medium. Then PC12 cells were treated with different DA concentrations of 0, 50, 100, 150, 200, 250, 300, 350 ^mol/mL to induce PC12 cells respectively. After incubation of 24 h, 5 ng/mL 3-(4,5-dimethylthiazol-2-yl)-2,5-diphenyl tetrazolium bromide (MTT) was added in each well to start reaction. DMSO was consequently used to calculate the cell viability at an ab-sorbance of 590 nm. To investigate whether DA modulates its function and toxicity, we developed an induc-ible model of DA (225 ^mol/mL, picked as the half death rate) in PC12 cells, comparing the DA group to the control group. Ultrasonication was used after 24 hr for disruption of cells and cell extract was collected for subsequent estimation of Sal.

Crude enzyme fraction was incubated in 50 mM Tris-HCl (pH 7.4) with 1 mM dopamine and 1mM acetaldehyde [10, 19]. After incubation at 37°C for 30 min, 20 ^L of1 M perchloric acid containing 1 mM EDTA and sodium metabisulfite was added to stop the reaction. After mixing and centrifugation at 17000 g for 15 min, the sample was diluted 25 fold and filtered through a 0.22 ^m cellulose membranes and stored at —80°C until detection.

Fig. 1. The viability of PC12 cells in different concentrations of DA. Cells were exposed to increasing