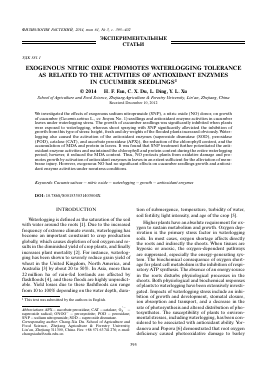 We investigated the effects of exogenous sodium nitroprusside (SNP), a nitric oxide (NO) donor, on growth of cucumber (Cucumis sativus L., cv. Jinyou No. 1) seedlings and antioxidant enzyme activities in cucumber leaves under waterlogging stress. The growth of cucumber seedlings was significantly inhibited when plants were exposed to waterlogging, whereas shoot spraying with SNP significantly alleviated the inhibition of growth from this type of stress: height, fresh and dry weights of the flooded plants increased obviously. Waterlogging also caused the activation of the antioxidant enzymes (superoxide dismutase (SOD), peroxidase (POD), catalase (CAT), and ascorbate peroxidase (APX)), the reduction of the chlorophyll content, and the accumulation of MDA and protein in leaves. It was found that SNP treatment further potentiated the anti-oxidant enzyme activities and maintained the chlorophyll and protein content during the entire waterlogging period; however, it reduced the MDA content. Thus, NO protects plants from oxidative damage and promotes growth by activation of antioxidant enzymes in leaves in an extent sufficient for the alleviation of membrane injury. However, exogenous NO had no significant effects on cucumber seedlings growth and antioxi-dant enzyme activities under nonstress conditions.

Waterlogging is defined as the saturation of the soil with water around the roots [1]. Due to the increased frequency of extreme climate events, waterlogging has become an important constraint to crop production globally, which causes depletion of soil oxygen and results in the diminished yield of crop plants, and finally increases plant mortality [2]. For instance, waterlogging has been shown to severely reduce grain yield of wheat in the United Kingdom, North America, and Australia [3] by about 20 to 50%. In Asia, more than 22 million ha of rain-fed lowlands are affected by flashfloods [4], and these floods are highly unpredictable. Yield losses due to these flashfloods can range from 10 to 100% depending on the water depth, dura-

tion of submergence, temperature, turbidity of water, soil fertility, light intensity, and age of the crop [5].

Higher plants have an absolute requirement for oxygen to sustain metabolism and growth. Oxygen deprivation is the primary stress factor in waterlogging soils. In most cases, oxygen shortage affects directly the roots and indirectly the shoots. When tissues are hypoxic or anoxic, the oxygen-dependent pathways are suppressed, especially the energy-generating system. The biochemical consequence of oxygen shortage for plant cell metabolism is the inhibition of respiratory ATP synthesis. The absence of an energy source in the roots disturbs physiological processes in the shoots. Both physiological and biochemical responses of plants to waterlogging have been extensively investigated. Impacts of waterlogging stress include an inhibition of growth and development, stomatal closure, ion absorption and transport, and a decrease in the rate of photosynthesis and altered distribution of pho-tosynthates. The susceptibility of plants to environmental stresses, including waterlogging, has been considered to be associated with antioxidant ability. Yor-danova and Popova [6] demonstrated that root oxygen deficiency caused photooxidative damage to barley

(Hordeum vulgare) leaves via an increased generation of reactive oxygen species (ROS), such as superoxide

droxyl radical (OH). These ROS can cause severe oxidative damage to membranes, DNA, and proteins.

In order to maintain intense growth and grain yield under waterlogging conditions, numerous attempts have been made to improve the waterlogging crop tolerance by both traditional breeding programs and bio-technological methods, although only few practical results have been obtained to date. Exogenous chemical treatment is a convenient and effective approach for enhancing the stress tolerance of crops and eventually improving crop productivity. Kubis [7] and Yiu et al. [8] reported that exogenous polyamines, such as the spermidine and putrescine, effectively activated ROS-scavenging enzymes, thus effectively alleviating damages caused by waterlogging. Yiu et al. [9] reported that exogenous catechin increased antioxidant enzyme activities and promoted flooding tolerance of tomato (Solanum lycopersicum).

Nitric oxide (NO) is a small, highly diffusible, gaseous free radical and an ubiquitous bioactive molecule that plays a key role as an intra- and intercellular messenger inducing various processes via either redox or additive chemistry in plants. It is able to scavenge ROS as an antioxidant agent and alter antioxidant gene expression as a signaling molecule, thus protecting plant cells from oxidative damage. In many studies, it was found that NO could counteract oxidative damage and had protective effect against various stressful conditions. NO increased the antioxidant enzyme activities of superoxide dismutase (SOD), catalase (CAT), and ascorbate peroxidase (APX) in mushroom (Agaricus bisporus) throughout the storage period [10]. Furthermore, NO could be one of the prime signals during flooding as suggested by Dordas et al. [11].

The importance of NO in the plant response to hy-poxia has recently been demonstrated. The spatial accumulation of NO correlated with the initiation of cell death in alfalfa (Medicago sativa) roots exposed to hy-poxia conditions [11]. In germinating pea (Pisum sati-vum) seeds, it was revealed that NO could regulate the respiratory oxygen consumption, so the seeds maintained some oxygen in order to prevent themselves from encountering complete anoxia [12]. Benamar et al. [13] also suggested a nitrite—NO cycle to occur under hypoxia. Igamberdiev et al. [14] and Igamberdi-ev and Hill [15] reported that NO produced in mitochondria is oxidized by non-symbiotic hemoglobins,

and the resulting N O- becomes available as a substrate for nitrate reductase. This cyclic process helps to generate ATP during oxygen-deprivation conditions.

However, to date, data in explaining the relationship between waterlogging, NO, and oxidative stress are still scarce. Cucumber is an important vegetable in the world, which likes the humid environment but sensitive to waterlogging. In Asia, especially in southeast China, excessive rainfall rains often disturb cucumber production during the hot summer season. Therefore, in this study, we investigated the impact of exogenous NO on the ROS-scavenging system in cucumber seedlings under waterlogging stress.