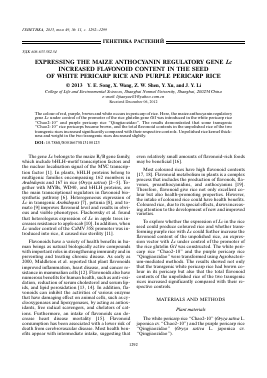 The colour of red, purple, brown and white occurs in pericarp of rice. Here, the maize anthocyanin regulatory gene Lc under control of the promoter of the rice glutelin gene Gt1 was introduced in the white pericarp rice "Chao2-10" and purple pericarp rice "Qingjiaozidao". The results demonstrated that some transgenic "Chao2-10" rice pericarps became brown, and the total flavonoid contents in the unpolished rice of the two transgenic rices increased significantly compared with their respective controls. Unpolished rice kernel thickness and weight in the two transgenic rices decreased slightly.

The gene Lc belongs to the maize R/B gene family, which include bHLH-motif transcription factors and the nuclear localisation signal of the MYC transcription factor [1]. In plants, bHLH proteins belong to multigenic families encompassing 162 members in Arabidopsis and 167 in rice (Oryza sativa) [2—5]. Together with MYBs, WD40, and bHLH proteins, are the main transcriptional regulators in flavonoid bio-synthetic pathway [6]. Heterogeneous expression of Lc in transgenic Arabidopsis [7], petunia [8], and tomato [9] improves flavonoid level and results in obvious and visible phenotypes. Flachowsky et al. found that heterologous expression of Lc in apple trees increases resistance to apple scab [10]. In addition, when Lc under control of the CaMV 35S promoter was introduced into rice, it caused rice sterility [11].

Flavonoids have a variety of health benefits in human beings as natural biologically active compounds with important roles in strengthening immunity and in preventing and treating chronic disease. As early as 2000, Middleton et al. reported that plant flavonoids improved inflammation, heart disease, and cancer resistance in mammalian cells [12]. Flavonoids also have numerous benefits for human health, such as anti-oxidation, reduction of serum cholesterol and serum lipids, and lipid peroxidation [13, 14]. In addition, fla-vonoids can inhibit the activities of various enzyme that have damaging effect on animal cells, such as cy-clooxygenases and lipoxygenases, by acting as antiox-idants, free radical scavengers, and chelators of cations. Furthermore, an intake of flavonoids can decrease heart disease mortality [15]. Flavonoid consumption has been associated with a lower risk of death from cerebrovascular disease. Most health benefits appear with intermediate intake, suggesting that

even relatively small amounts of flavonoid-rich foods may be beneficial [16].

Most coloured rices have high flavonoid contents [17, 18]. Flavonoid metabolism in plants is a complex process that includes the production of flavonols, fla-vones, proanthocyanidins, and anthocyanins [19]. Therefore, flavonoid give rice not only excellent colour but also health-promoting properties. However, the intake of coloured rice could have health benefits. Coloured rice, due to its special effects, draws increasing attention to the development of new and improved varieties.

To explore whether the expression of Lc in the rice seed could produce coloured rice and whether transforming purple rice with Lc could further increase the flavonoid content of the unpolished rice, an expression vector with Lc under control of the promoter of the rice glutelin Gt1 was constructed. The white pericarp rice "Chao2-10" and the purple pericarp rice "Qingjiaozidao" were transformed using Agrobacteri-um-mediated methods. The results showed not only that the transgenic white pericarp rice had brown colour in its pericarp but also that the total flavonoid contents of the unpolished rice of the two transgenic rices increased significantly compared with their respective controls.

The transformation method has been described previously [22]. The immature embryos of the white pericarp rice "Chao2-10" and the purple pericarp rice seeds were used for inducing calli in the dark on N6D2 medium at 26 ± 1°C for six days. Calli were infected with Agrobacterium tumefaciens (OD600 ~ 0.3) containing pCAMBIA1301-Gt1 pro-Lc. Agrobactium, and the calli were co-cultivated together in the dark on N6D2C medium at 22 ± 1°C for three days. The infected calli were placed on N6D2 medium containing 500 mg/L cefotaxime (Cef) and 25 mg/L hygromycin-B (Hpt) for screening resistant calli for 14 days, and screened sequentially on N6D2 medium containing 500 mg/L Cef and 50 mg/L Hpt for another 14 days. Then resistant calli were placed in a preliminary differentiation medium for eight days, and in a differentiation medium until produced buds. After growing up to two or three centimeters, the buds were transferred into a root inducement medium for inducing to grow roots. Finally, the rooted plantlets were transplanted in the field until maturity. For the purple pericarp rice transformation, 0.5 mg/L 1-naphthylacetic acid (NAA) and 0.5 mg/L kinetin (KT) were added to the N6D2 medium used to induce the calli, and the concentration of N-Z-Amine A in the N6D2C medium used in the co-culture stage was increased from 0.5 g/L to 1.0 g/L.

Total genomic DNA was isolated from the leaves of the transgenic plants transplanted in the field as described previously [23]. The primers LC1 and LC3 were used to amplify the Lc fragment. The primer sequences and amplification conditions were as described in Li et al. [11].

The GUS expression of the transgenic rice was assayed according to the method of Jefferson [24].

Total RNA was extracted from young caryopses (their hulls were removed) 15 days after flowering (DAF) using Trizol reagent according to the manufacturer's instructions (Invitrogen, USA). Total RNA (1.0 ^g) was treated with RNase-free DNase I (Fermentas, Canada), and the first strand of cDNA was synthesised using the BBI reverse transcription kit. The P-actin gene was used as an internal control.

The primer sequences and amplification conditions were as described in Li et al. [11], and the products were separated by electrophoresis using a 1% (m/V) agarose gel.

The total flavonoid content of the unpolished rice was determined as previously described [25]. For the total flavonoid extraction, 2.0 g unpolished rice of each plants (approximately 100 unpolished rice kernels) were ground in liquid N2, soaked in ethyl ether and shaken for 30 min at 45°C. The ethyl ether was discarded when the suspension was clear. Then the precipitate was dissolved in 60 mL methanol and shaken overnight at 70°C water-bath. The solution was percolated by absorbent cotton and desiccated using rotary evaporator (China, Shanghai precision & scientific instrument). The extract dissolved in 10 mL methanol. After dilution 1.0 mL solution to 1/100 with

Fifty transgenic rice seeds and their corresponding control rice seeds were selected and their hulls were removed for the measurement of unpolished rice kernel length, width, and thickness using a vernier calliper. In parallel, the 100-kernel weights of the transgenic unpolished rices and their corresponding control rices were measured, with each sample repeated three times. The measurement data were processed statistically using t-test.