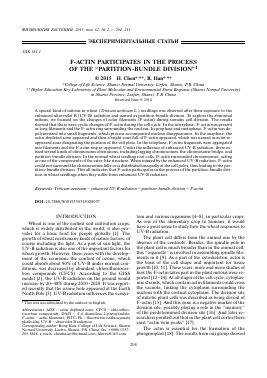 A special kind of mitosis in wheat (Triticum aestivum L.) seedlings was observed after their exposure to the enhanced ultraviolet B (UV-B) radiation and named as partition-bundle division. To explore the abnormal mitosis, we focused on the changes of actin filaments (F-actin) during somatic cell division. The results showed that there were cyclic changes of F-actin during the cell cycle. In the interphase, F-actin was present as long filaments and the F-actin ring surrounding the nucleus. In prophase and metaphase, F-actin was de-polymerized into small fragments, which process accompanied nucleus disappearance. In the anaphase, the actin-depleted zone appeared and then a bright zone full of F-actin appeared, which was named as actin reappeared zone designating the position of the cell plate. In the telophase, F-actin fragments were aggregated into filaments and the F-actin ring re-appeared. Under the influence of enhanced UV-B radiation, there existed several kinds of chromosome aberrations, including lagging chromosomes, the chromosome bridge, and partition-bundle division. In the normal wheat seedling root cells, F-actin surrounded chromosomes, acting as one of the components of the aster-like structure. When injured by the enhanced UV-B radiation, F-actin could not surround the chromosomes fully or is distributed unequally at the cell poles, thus leading to the partition-bundle division. This all indicates that F-actin participates in the process of the partition-bundle division in wheat seedlings when they suffer from enhanced UV-B radiation.

Wheat is one of the earliest soil cultivation crops, which is widely distributed in the world; it also provides for a basic food for people globally [1]. The growth ofwheat needs many kinds of nature factors, of course including the light. As a part of sun light, the UV-B radiation is also one of the important factors for wheat growth. However, these years with the development of the economic the content of ozone, which could absorb about 90% of UV-B under normal conditions, was decreased by abundant chlorofluorocar-bon compounds (CFCS). According to the GISS model [2], the UV-B radiation on the ground would increase by 20-40% during 2010-2020. It was reported recently that the ozone hole appeared at the Earth North Pole [3]. UV-B radiation influences the ecosys-

tem and various organisms [4-8], in particular crops. As one of the alimentary crop to humans, it would have a great sense to study how the wheat responses to UV-B radiation.

The plant cell differs from the animal one by the absence of the centriole. Besides, the spindle pole in the plant cell is much broader than in the animal cell; this "organelle" is involved in assembling spindle filaments in it [9]. As a part of the cytoskeleton, actin is the basis of the cell shape and important for tissue growth [10, 11]. These years, more and more studies of how the F-actin takes part in the plant mitosis were reported [12-14]. At all stages of the cell cycle, cytoplas-mic strands, which contain actin filaments could cross the vacuole, linking the cytoplasm surrounding the nucleus with the cortical cytoplasm. The division site of mitotic plant cells was described as being devoid of F-actin [15]. And this zone is a negative marker of the division site, possibly playing a role in the "memory" of the predetermined division site [16]. And later researchers pointed out that in the plant cell cortex there exist "actin twin peaks" [17].

The actin is essential for the formation of the phragmoplast [18]. The results from our group showed

that, after enhanced UV-B radiation, abnormal phragmoplast could appear, for example double phragmoplast [19]. Maybe this was caused by the injury of the actin. Besides, during mitosis, F-actin surrounds the spindle like a cage; some F-actin was found in the spindle apparatus, where it was distributed near the poles and centromeres [13, 20]; aster-like structures, which were composed of F-actin, were found in both plant [21] and algal cells [22]; this all indicates that actin may play an important role in the process of

partition-bundle division in the cells, especially under abnormal conditions. We made detailed and systemic study on the damage induced by UV-B and the repair from He-Ne laser irradiation ofwheat seedlings. It was for the first time reported the partition-bundle division during the study of mitosis in wheat root tip cells. It was found that during the anaphase to telophase of mitosis, chromosomes of the wheat root tip cells fell into three bundles, four bundles, or six bundles after the UV-B radiation (fig. 1).

* Lighting with UV-B radiation at the same time.

The study of relationship between F-actin under the UV-B will explain the possible role of the F-actin during the partition-bundle division, enrich the basic mechanism of plant mitosis, and help us to found the possible mechanism of wheat defense against UV-B to guide the production of wheat in the future.

Enhanced UV-B treatment. Two seedling groups were used in the experiment. some plants were treated with UV-B for 8 h every day for three days, and the other control plants were not treated with UV-B. UV-B lamp (30 W, 297 nm) was set vertically above the dishes; the intensity was controlled through the distance between the lamp and the dishes. As Han et al. [9] described, the dosage was 10.08 kJ/(m2 day); thus, the ozone was descended by 20%, UV-B was reinforced by 40%.

Root tip cells immunolabeling. The root tips of three-day-old wheat seedlings were cut into 2-mm fragments and used for immunolabeling. Double fluorescent labeling of root-tip cells with DAPI and FITC-Ph [23] was carried out. The incubation with FITC-Ph (50 ^g/mL) was performed at 37°C for 40 min, while incubation with DAPI (100 ng/mL) was at 37°C for 10 min. The Olympus FV1000 confocal microscope was used to observe the results; the object glass was x100 oil immersion lens; the collection of the pictures was 512 x 512 pixel. At the end the pictures were composed with Photoshop CS5.

In order to show the distribution of the F-actin in details, we gathered all division phases of wheat root tip cells into fig. 2. In this figure, chromatin and F-ac-tin are shown as C and F, respectively. In the interphase, F-actin was present as long filaments equally distributed in the cytoplasm and the F-actin ring sur-

rounding the nucleus (figs. 2a1, 2b1). When the cell entered into the mitotic phase, the nuclear membrane broke, the F-actin was fragmented step by step, and chromosomes were fully in the cytoplasm (figs. 2c, 2d). When the cells were in the anaphase, fragments of the F-actin were positioned near chromosomes and gathered in the cell "pole" (figs. 2e1, 2f1). Then the actin-depleted zone (ADZ) appeared (fig. 2e1, indicated by the white arrow). Later the F-actin gathered to the ADZ and then the actin re-appeared zone appeared (fig. 2f1, indicated by the white arrow). When the cells turned into the telophase, the actin re-appeared zone widened, the F-actin in the cell poles disappeared, and the nucleus occurred. And after F-actin gathered into filaments, the cells would enter into the next interphase (figs. 2g1, 2h1).

From fig. 3 (chromatin and F-actin are shown as C and F, respectively), it is evident that, when treated with UV-B radiation, the behavior of F-actin was different from that in the normal wheat root tip cells. The F-actin was broken into small fragments and the F-ac-tin ring was not obvious (figs. 3a1, 3c1). Besides, co-enocyte phenomenon appeared (fig. 3c). As in the fig. 3D, three-bundle division was seen clear