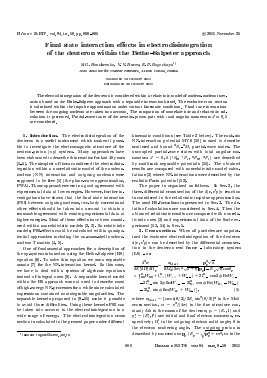 The electrodisintegration of the deuteron is considered within a relativistic model of nucleon-nucleon interaction based on the Bethe-Salpeter approach with a separable interaction kernel. The exclusive cross section is calculated within the impulse approximation under various kinematic conditions. Final state interactions between the outgoing nucleons are taken into account. The comparison of nonrelativistic and relativistic calculations is presented. Partial-wave states of the neutron-proton pair with total angular momentum J = 0,1 are considered.

1. Introduction. The electrodisintegration of the deuteron is a useful instrument which makes it possible to investigate the electromagnetic structure of the neutron-proton (np) system. Many approaches have been elaborated to describe this reaction for last 40 years [1-5]. The simplest of them considered the electrodisintegration within a nonrelativistic model of the nucleon-nucleon (NN) interaction and outgoing nucleons were supposed to be free [1] (the plane-wave approximation, PWA). Those approaches were in a good agreement with experimental data at low energies. However, further investigations have shown that the final state interaction (FSI) between outgoing nucleons, two-body currents and other effects should be taken into account to obtain a reasonable agreement with existing experimental data at higher energies. Most of these effects have been considered within nonrelativistic models [2, 3]. In relativistic models, FSI-effects could be calculated within quasipotential approaches including the on-mass-shell nucleon-nucleon T matrix [4, 5].

One of fundamental approaches for a description of the np-system is based on using the Bethe-Salpeter (BS) equation [6]. To solve this equation we use a separable ansatz [7] for the NN-interaction kernel. In this case, we have to deal with a system of algebraic equations instead of integral ones [8]. A separable kernel model within the BS approach was not used to describe most of high-energy NN-processes for a while since calculated expressions contained nonintegrable singularities. The separable kernels proposed in [9-11] make it possible to avoid those difficulties. Using these kernels FSI can be taken into account in the electrodisintegration in a wide range of energy. The electrodisintegration cross section is calculated in the present paper under different

kinematic conditions (see Table 2 below). The rank-six NN-interaction potential MY6 [10] is used to describe scattered and bound 3Si-3D1 partial-wave states. The uncoupled partial-wave states with total angular momentum J = 0,1 (1So, 1Pi, 3P0, 3Pi) are described by multirank separable potentials [11]. The obtained results are compared with nonrelativistic model calculations [3] where NN-interactions were described by the realistic Paris potential [12].

The paper is organized as follows. In Sec. 2, the three-differential cross section of the d(e, e'p)n reaction is considered in the relativistic impulse approximation. The used BS-formalism is presented in Sec. 3. The details of calculations are considered in Sec. 4. Then the obtained relativistic results are compared with nonrelativistic ones [3] and experimental data of the Sacle experiment [13, 14] in Sec. 5.

2. Cross section. When all particles are unpolar-ized the exclusive electrodisintegration of the deuteron d(e, e'p)n can be described by the differential cross section in the deuteron rest frame - laboratory system (LS) - as:

defined by the sum of the proton pp and neutron pn momenta. The photon density matrix elements have the following form:

where Q2 = —q2 is introduced for convenience. The hadron density matrix elements

where A, A' are photon helicity components [15], can be calculated using the photon polarization vectors e and Cartesian components of hadron tensor

where S is the spin of the np pair and Ms is its projection; ad, sn and Sp <1X6 deuteron, neutron and proton momentum projections, respectively. The matrix element (np : SMs\ j/j,\d : 1M) can be constructed according to the Mandelstam technique [16] and has the following form in LS:

within the relativistic impulse approximation. The sum over n = 1,2 corresponds to the interaction of the virtual photon with the proton and with the neutron in the deuteron, respectively. The total PCM and relative p* cm momenf a 0f ^e outgoing nucleons and the integration momentum pCM are considered in the final np pair rest frame - center-of-mass system (CM), p denotes the relative np pair momentum in LS. To perform the integration, momenta p, q and the deuteron total momentum o) = (Md,0) in LS are written in CM using

the Lorenz-boost transformation C along the q direction. The np pair wave function ?/>sms is transformed from CM to LS by the corresponding boost operator A. A detailed description of t^sMs > the nth nucleon interaction vertex rj^, the propagator of the nth nucleon S and the deuteron vertex function TM can be found in our previous works [8, 17].

3. Separable kernel of NN interaction. The outgoing np pair is described by the T matrix which can be found as a solution of the inhomogeneous Bethe-Salpeter equation [6]:

where V is the NN-interaction kernel, S2 is the free two-particle Green function:

and p (p') is the relative momentum of initial (final) nucleons, P is the total np pair momentum.

are constructed from the free nucleon Dirac spinors u, v. It should be mentioned that only positive-energy states with p = + are considered in this paper. Using a similar decomposition for V, the BS-equation for radial parts of the T-matrix and kernel V is obtained:

To solve the resulting equation (11) a separable ansatz [7] for the interaction kernel V is used:

where N is a rank of a separable kernel, gi are model functions, Aij is a parameter matrix. Substituting V (12) in BS-equation (7), we obtain the T-matrix in a similar separable form:

are auxiliary functions, Ek = Vk2 + m2. Thus, the problem of solving the initial integral BS-equation (7) turns out to finding the gi functions and parameters Ay of separable representation (12). They can be obtained from a description of observables in np elastic scattering [10,11,19-21].

4. Final state interaction. In our previous works [10, 17] the electrodisintegration of the deuteron was considered within the plane wave approximation (PWA) when the final nucléons were supposed to escape without interaction. Even though PWA is enough to describe the electrodisintegration at low energies, it is important to take into account the final state interaction (FSI) between the outgoing nucléons. As it was shown in other works [3], the contribution of FSI-effects increases with increasing nucléon energies or/and momentum transfer. Therefore, the relativistic models of the NN-interaction must be elaborated and FSI should be included into calculations to get an adequate description of the electrodisintegration. The first relativistic model based on a separable kernel approach was Graz II [19]. However, it was impossible in principle to calculate FSI using it [11]. To solve this problem new relativistic separable kernels [10, 11] were elaborate