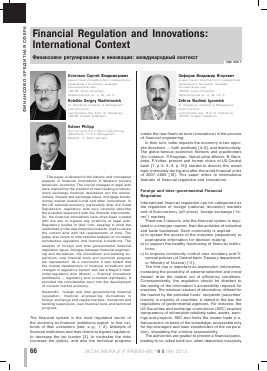 create the new financial tools (innovations) in the process of financial engineering.

In their turn, latter impacts the economy in two opposite directions — both positively [4-6], and destructively. The globe-famous economic thinkers and practitioners (for instance, P. Krugman, Nobel prize Winner, B. Bernanke, P. Volker, present and former chairs of US Central bank [7, p. 5; 8; 9, p. 15]) started to discuss this mixed topic intensively during and after the world financial crisis of 2007-2009 [10]. This paper refers to international features of financial regulation and innovations.

International financial regulation can be categorized as the regulation of foreign (national, domestic) markets and of Eurocurrency (off-shore), foreign exchange ("forex") markets.

There are 3 reasons, why the financial system is regulated in a stronger manner, than the activities of industrial and trade businesser. Each community is aspired:

a) to spread the access of the investors (depositors) to appropriate information for decision making;

b) to support the healthy functioning of financial institutions;

c) to improve community control over monetary and financial policies (of Central bank; Treasury department, or Ministry of finance) [11].

The first one is important as asymmetric information, increasing the possibility of adverse selection and moral hazard, drive the market out of efficiency conditions. Correspondently, the regulation should be directed to the raising of the information's accessibility required for investors. The minimum amount of information, offered for the market by the potential funds' recipients (securities' issuers) in majority of countries, is stated in the law, the regulations of governmental agencies. For instance, the US Securities and exchange commission (SEC) requires transparency of information relatively sales, assets, earnings and projects. SEC also limits the insider trade (i. e. fransactcons on basis of the knowledge, accessable only for top-managers and main stockholders of the corporation), stipulating the criminal responsibility.

The authorities are goaled to prevent a financial panic, leading to so called bank run, when depositors massively

withdraw their funds firstly from the weak institutions, and then from healthy ones, increasing the feasibility of an overall financial system crash. There are 6 measures of regulation, directed to prevent the panic in financial markets, including:

• the licensing of the commercial banks,

• limiting of branch' establishment (to decrease the destroying, or so called throat cut, competition)

• ceilings of deposit rates (to cheapen the credit' interest rates and stimulate the investment process). Regulation of such kind, besides the stabilization of

financial institutions, improves the control of monetary policy (including the reserve, discount ones, the open market transactions, the targeting of money supply).

The structure of governmental bodies, supervising the financial markets, varies in different countries. The experience of US agencies, regulating the financial system, is valuable as it was applicable to world largest financial market. Us security markets are supervised by SEC, and additionally by the US Commodity Futures Trading Commission.

The competency of the first body is spread to the organized exchanges, and the over-the-counter (electronic) capital markets. It establishes the requirements on informational transparency, and restricts insider trade. The second body conducts the overall regulation of the trade procedures in the organized exchanges, where futures' contracts are negotiated.

The banking sphere is inspected by a range of a governmental entities. On the federal level, there are the Currency comptroller office of the Treasury department (Ministry of finance)1, the Federal reserve system (Central bank), and the Federal deposit insurance corporation (FDIC). The first one grants the licenses, audits the accounting statement, and restrains the transactions of banks. The Central bank ("Fed") verifies the financial statement of depository institutions, installs the reserve requirements for deposits, the discount rate ("refinancing rate", in terms of Russian Central bank), Also it promotes the monetary policy ("money-credit policy"). FDIC insures the deposits in depository institutions, checks their accounting statement, and enters the restrictions on deals to elevate the investment reliability. On the local level, the regulating functions are realized by the agencies, like the State (County) offices for the banks and financial institutions supervision.

Nonresidents, conducting the transactions in the USA (issues of securities, establishment of subsidiaries, branches, raising the credits, insurances), subjecting to American legislation, are regulated by the same (above-listed) agencies.

For all of that, the supervision of national markets are accomplished in direct and just severe regime, however, the inspection of Eurocurrency (off-shore) transactions is characterized by indirect features, and it linked in prevailing degree with the measures of the major central banks.

Promoting the currency policy, the central banks conduct the interventions in forex and money markets, utilize the tools of monetary policy (manipulating by discount rate, reserve requirements, transacting in the open market), and also the currency legislation (prohibitions, restrictions, control). As a result, determined countries are

Inter-governmental (and supranational) financial regu- ° lation refers to the coordination of the currency interven- < tions, monetary policy, and the unification of the financial i juridical regimes among the countries. e^

The patterns of the first ones are the agreements be- q^ tween the central banks' chairs of the 10 major western ^ countries ("Group 10", G10), concluded in 1985 in Wash- m ington (February), and in New-York City (September, 8 "Plaza agreement"2), considering a decreasie of the dollar < rate, which was estimated as overvalued around 35-40%. ^ One example of the long-run coordination of the currency e policy is G10' arrangement of February 22, 1987 in Paris (so titled "Louvre accord"), which, due to opinion of many analysts, unofficially targeted the US dollar rates against German mark and Japanese yen for the decades. In Russia, customarily the phrase "to introduce the currency corridor" is utilized instead of "target zone".

The unification of financial legislation is represented

• by the system of arrangements, undertaken in developed countries in early 1980s fo