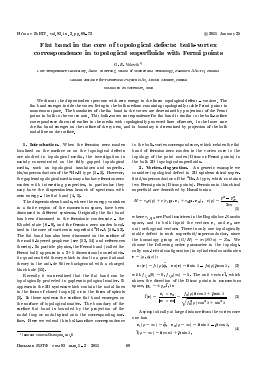 Flat band in the core of topological defects: bulk-vortex correspondence in topological superfluids with Fermi points

We discuss the dispersionless spectrum with zero energy in the linear topological defects - vortices. The flat band emerges inside the vortex living in the bulk medium containing topologically stable Fermi points in momentum space. The boundaries of the flat band in the vortex are determined by projections of the Fermi points in bulk to the vortex axis. This bulk-vortex correspondence for flat band is similar to the bulk-surface correspondence discussed earlier in the media with topologically protected lines of zeroes. In the latter case the flat band emerges on the surface of the system, and its boundary is determined by projection of the bulk nodal line on the surface.

The dispersionless bands, where the energy vanishes in a finite region of the momentum space, have been discussed in different systems. Originally the flat band has been discussed in the fermionic condensate - the Khodel state [6-9], and for fermion zero modes localized in the core of vortices in superfluid 3He-A [10-12]. The flat band has also been discussed on the surface of the multi-layered graphene (see [13, 14] and references therein). In particle physics, the Fermi band (called the Fermi ball) appears in a 2+1 dimensional nonrelativis-tic quantum field theory which is dual to a gravitational theory in the anti-de Sitter background with a charged black hole [15].

to the bulk-vortex correspondence, which relates the flat band of fermion zero modes in the vortex core to the topology of the point nodes (Dirac or Fermi points) in the bulk 3D topological superfluids.

2. Vortex-disgyration. As generic example we consider topological defect in 3D spinless chiral super-fluid/superconductor of the 3He-A type, which contains two Fermi points (Dirac points). Fermions in this chiral superfluid are described by Hamiltonian

where 71,2,3 are Pauli matrices in the Bogoliubov-Nambu space, and in bulk liquid the vectors ej and e2 are unit orthogonal vectors. There is only one topologically stable defect in such superfluid/superconductor, since the homotopy group m(G/H) = m(SOs) = Z2- We choose the following order parameter in the topologically non-trivial configuration (in cylindrical coordinates r = (p,(t>,z)):

Asymptotically at large distance from the vortex core one has

which means that changing the parameter A one makes the continuous deformation of the pure phase vortex at A = 0 to the disgyration in the 1 vector without vorticity at A = 7r/2, and then to the pure vortex with opposite circulation at A = 7r (circulation of the superfluid velocity around the vortex core is j> ds ■ vs = k cos A, where k = irh/m.). We consider how the flat band in the core of the defect evolves when this parameter A changes. In bulk, i.e. far from the vortex core, the Dirac points are

Due to the bulk-vortex correspondence, which we shall discuss in the next section, the projection of these two points on the vortex axis gives the boundary of the flat band in the core of the topological defect:

3. Bulk-vortex correspondence. Let us first give the topological arguments, which support the existence of the flat band inside the vortex-disgyration line. Let us consider the Hamiltonian (1) in bulk (i.e. far from the vortex core) treating the projection p~ as parameter of the 2D system. At each p~ except for two values p~ = ±pfcosA corresponding to two Fermi points (see Figure), the Hamiltonian has fully gapped spectrum and thus describes the effective 2D insulator. One can check that this 2D insulator is topological for |p~| < pp\ cos A| and is topologically trivial for \pz\ > pp\ cos A|. For that one considers the following invariant describing the 2D topological insulators or fully gapped 2D supefluids [16]:

Projections of Dirac (Fermi) points on the direction of the vortex axis (the z-axis) determine the boundaries of the flat band in the vortex core. Fermi point in 3D systems represents the hedgehog (monopole) in momentum space [16]. For each plane pz = const one has the effective 2D system with the fully gapped energy spectrum EPl (px,py), except for the planes with pz± = ±pF cos A, where the energy EPl{pX)py) has a node due to the presence of the hedgehogs in these planes. Topological invariant Ns(pz) in (7) is non-zero for < pf| cosA|, which means that for any value of the parameter pz in this interval the system behaves as a 2D topological insulator or 2D fully gapped topological superfluid. Point vortex in such 2D superfluids has fermionic state with exactly zero energy. For the vortex line in the original 3D system with Fermi points this corresponds to the dispersionless spectrum of fermion zero modes in the whole interval < pf| cos A|

Flat band in the core of topological defects

On the other hand no such levels are present after the topological transition to the state of matter with N3 = 0.

The similar reconstruction of the spectrum at the topological quantum phase transition takes place for any parameter A ^ 7r/2 of the considered defect. This can be understood using the topology in the mixed real and momentum space [20, 21]. To study fermions with zero energy (Majorana fermions) in the core of a point vortex in a 2D topological superconductor, the Pontrya-gin invariant for mixed space has been exploited in Ref. [1]. The Pontryagin invariant describes classes of mappings S2 x S1 S2. Here the mixed space S2 x S1 is the space (px,py,(/>), where 4> is the coordinate around the vortex-disgyration far from the vortex core. This space is mapped to the sphere S2 of unit vector g(Px,Py,<t>) = g(Px,Py,<t>)/\g(Px,Py,<t>)\ describing the 2D Hamiltonian. In our case it is the Hamiltonian (1) outside the vortex core: