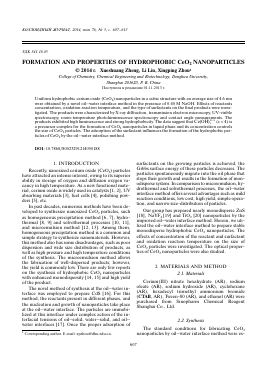 Uniform hydrophobic cerium oxide (CeO2) nanoparticles in a cubic structure with an average size of 4.6 nm were obtained by a novel oil—water interface method in the presence of 0.40 M NaOH. Effects of reactants concentration, oxidation reaction temperature, and the type of surfactants on the final products were investigated. The products were characterized by X-ray diffraction, transmission electron microscopy, UV-visible spectroscopy, room-temperature photoluminescence spectroscopy and contact angle measurements. The products exhibited high luminescence and strong hydrophobicity. The data suggest that Ce(OH)x x (x < 4) is a precursor complex for the formation of CeO2 nanoparticles in liquid phase and its concentration controls the size of CeO2 particles. The adsorption of the surfactant influences the formation of the hydrophobic particles of CeO2 by the oil—water interface method.

In past decades, numerous methods have been developed to synthesize nanosized CeO2 particles, such as homogeneous precipitation method [6, 7], hydrothermal [8, 9] and solvothermal processes [10, 11], and microemulsion method [12, 13]. Among them, homogeneous precipitation method is a common and simple strategy to synthesize nanomaterials. However, this method also has some disadvantages, such as poor dispersion and wide size distribution of products, as well as high pressure and high temperature conditions of the synthesis. The microemulsion method allows the fabrication of well-dispersed products; however, the yield is commonly low. There are only few reports on the synthesis of hydrophobic CeO2 nanoparticles with enhanced monodispersity [14, 15] and high yield of the product.

surfactants on the growing particles is achieved, the Gibbs surface energy of these particles decreases. The particles spontaneously migrate into the oil phase that stops their growth and results in the formation of monodisperse system. In comparison to microemulsion, hydrothermal and solvothermal processes, the oil-water interface method offers several advantages such as mild reaction conditions, low cost, high yield, simple operation, and narrow size-distribution of particles.

tablished as follows: 7.50 mmol sodium oleate and 2.50 mmol cerium nitrate hexahydrate were dissolved in 10 mL and 5.0 mL of deionized water, respectively, and then transferred into a three-necked flask. Under vigorous stirring, 25 mL cyclohexane was added into the system and then heated at 40°C for 30 min. After that, 10 mL of 0.40 M sodium hydroxide was added into this mixture and kept at the same temperature for 10 h. Hereafter, the resulting product was transferred to a 100 mL Teflon-lined stainless-steel autoclave and aged at 180°C for 24 h. Finally, the mixture was cooled down to room temperature and about 20 mL of etha-nol was added into the upper oil phase to precipitate the nanoparticles. The powder was collected by cen-trifugation and then washed for three times, using eth-anol and deionized water. The product was dried at 50°C for 12 h in a vacuum.

3.1. Analysis of Morphology and Structure

Figure 1 shows TEM images and XRD profile of CeO2 nanoparticles fabricated by the oil—water interface method under the standard conditions. Uniform and well-dispersed nanoparticles were obtained with an average size of 4.60 nm, as calculated from images in Fig. 1a. The high resolution TEM image shown in Fig. 1b indicates high crystallinity of the structure, the d spacing of lattice fringes of 0.32 nm is indexed to the (111) plane of CeO2. From Fig. 1c, all the diffraction peaks were indexed as those of pure cubic fluorite CeO2, with no other crystalline impurities.

3.2. Factors Influencing on the Formation

3.2.1. Effect of reactants concentration. TEM images of CeO2 synthesized at different concentrations of reactants with the OH-/Ce3+ molar ratio of 12 : 1 are shown in Fig. 2. The sizes of the CeO2 nanoparticles calculated from the TEM images were 3.1 and 3.2 nm for the concentrations of Ce3+ being equal to 0.01 M and 0.10 M, respectively. As evidenced by Fig. 2, the size and morphology of CeO2 remained unaltered upon an increase of the reactant concentration by 9 times at the same molar ratio. This stability is advantageous with respect to hydrothermal and solvothermal syntheses [9] and, thus, provide an opportunity of high-yield fabrication of nanoparticles.

3.2.2. Effect of reaction temperature. XRD profiles of products obtained in a course of the oxidation showed that nucleation took place just after the oxidation of Ce(OH)3 to Ce(OH)4. Figure 3 shows the images of samples obtained at different oxidation reac-

tion temperatures under standard conditions. The size of CeO2 nanoparticles was 4.6 nm for the oxidation temperature of 40°C. However, the size decreased to 3.4 nm upon increasing temperature to 60°C, that adversely influenced the quality of dispersion. This effect may originates from endothermic transformation of Ce(OH)4 to CeO2. High temperature favors the nucle-ation of CeO2, resulting in a wide size distribution of small nanoparticles.

To explain this effect, we have to understand the influence of pH on the formation of metal oxide from

Fig. 5. Dependence of the size of CeO2 nanoparticles on concentration of NaOH.

metal hydroxide. In case of of TiO2 and ZrO2 nanoparticles, Ti(OH)+ and Zr(OH)- have been confirmed as their precursor complexes [21—23], respectively. Moreover, the size of nanoparticles has been found to increase for TiO2 and to decrease for ZrO2 upon the increase of pH in their hydroxide suspensions.

In general, metal hydro-complexes usually play a key role in the formation of metal oxide from metal hydroxide in aqueous solution [24, 25]. According to the Eq. (1), the concentration of nucleation precursor

Ti(OH)+ of TiO2 decreased and then the size of the resulting TiO2 particles increased in more basic solutions. In contrast to TiO2, the concentration of nucle-

ation precursor Zr(OH)5 of ZrO2 increased with increasing concentration of OH-, that results in the decrease of the size of ZrO2 particles (Eq. (2)). That is, the metal complex f