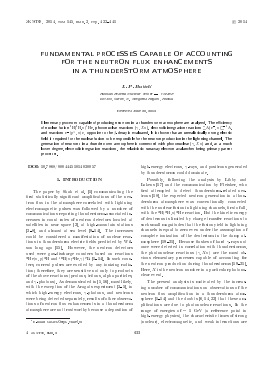 Elementary processes capable of producing neutrons in a thunderstorm atmosphere are analyzed. The efficiency of nuclear fusion JH(JH,/?) JHc, photonuclear reactions (y.Xn), electrodisintegration reactions "„ ;?)"„_1A, and reactions e~ {p+ , opposite to the ¿¡-decay is evaluated. It is shown that an unrealistically strong electric field is required for the nuclear fusion to be responsible for the neutron production in the lightning channel. The generation of neutrons in a thunderstorm atmosphere is connected with photonuclear (y.Xn) and, at a much lower degree, electrodisintegration reactions, the relativistic runaway electron avalanches being primary parent processes.

The paper by Shall et al. fl] communicating the first statistically significant amplifications of the neutron flux in the atmosphere correlated with lightning electromagnetic pulses was followed by a number of communications reporting thunderstorm-associated increases in count rates of neutron detectors located at satellites in near space [2], at high-mountain stations [3 8], and almost at sea level [9 14]. The increases could be considered a manifestation of nuclear reactions in thunderstorm electric fields predicted by Wilson long ago [15]. However, the neutron detectors used were gas-discharge counters based on reactions 3He(n,p)3H and 10B(;v/,4He,7)'Li fl 14]. In such counters, current pulses are excited by any ionizing radiation; therefore, they are sensitive not only to products of the above reactions (protons, tritons, alpha particles, and 7-photons). As demonstrated in [5,16], most likely, with the exception of the Aragats experiment [3 5], in which high-energy electrons, 7-photons, and neutrons were being detected separately, results of other observations of neutron flux enhancements in a thunderstorm atmosphere are not trustworthy because a deposition of

high-energy electrons, 7-rays, and positrons generated by thunderstorms could dominate.

Possibly, following the analysis by Libby and Lukens [17] and the communication by Fleisher, who first attempted to detect thunderstorm-related neutrons [IS], the expected neutron generation in a thunderstorm atmosphere was conventionally connected with the nuclear fusion in lightning channels, first of all, with the 2H(2H,n)3He reaction. But the kinetic energy of deuterons is limited by charge transfer reactions to such small magnitudes that the fusion yield in lightning channels is equal to zero even under the assumption of complete ionization of the deuterium in the damp atmosphere [19 21]. Because flashes of hard 7-rays not once were detected in correlation with thunderstorms, the photonuclear reactions (j.Xn) are the most obvious elementary processes capable of accounting for the neutron production during thunderstorms [19 21]. Here, A' is the neutron number in a particular photonuclear event.

The present analysis is motivated by the increasing number of communications 011 observations of the neutron flux amplification in a thunderstorm atmosphere [1 14] and the doubts [6,14, 22] that these amplifications are due to photonuclear reactions. In the range of energies of ~ 1 GeV (a reference point in high-energy physics), the characteristic times of strong (nuclear), electromagnetic, and weak interactions are

respectively equal to ts/,. ~ 10-24 s, rei ~ 10-21 s, and t„;„i ~ 10-10 s [23] and, at first glance, it seems that the strong interaction dominates, but we consider representatives of all fundamental interactions possibly occurring in a thunderstorm atmosphere. In our analysis, we reconsider possibilities of the nuclear fusion 2H(2H,n)3He and photonuclear reactions initiated by relativistic runaway electron avalanches (RREA) [24]. For the first time, neutron-producing interactions of high-energy electrons with atomic nuclei are considered, which were not taken into account previously, though the observed pulses of hard 7-rays only are a secondary bremsstrahlung of high-energy electrons. The thresholds of some of the above reactions are lower than the threshold (7, In) of photonuclear reactions in air. Only this can make them more efficient than (j.Xn) reactions in air. Furthermore, high-energy electrons directly produce neutrons, unlike photonuclear reactions requiring an intermediate bremsstrahlung process. Therefore, it is conceivable that the neutron yields due to interactions of high-energy electrons with atmospheric nuclei can be significant .

In this section, we reconsider the possibilities of nuclear fusion, but unlike in the previous analyses [19 21], where the neutron yield of the 2H(2H,n)3He reaction was estimated in a lightning channel, we estimate the field strength required for producing at least one neutron in the channel. For this, as in [19 21], we proceed from the formula for the expected neutron yield of the reaction 2H(2H,n)3He:

where Atl « 2.7 • 1025 ni-3 • atm-1 is the number density of air molecules (Loshmidt's number), P fatni] is the pressure at the altitude of interest, [H20] and [D] are the relative concentration of water vapor molecules in a thunderstorm atmosphere and the relative concentration of deuterium atoms per hydrogen atom in natural water, ",„„. rlo„. and //,„„ are the kinetic energy, velocity, and number density of the deuterium ions, Sck and !ck are the cross-sectional area and length of the lightning channel, At is the lifetime of the strong electric field within the lightning channel ((•„„,A/ -C /cft), cTf.U8(eion) is the cross section for the

nuclear fusion reaction, ejus is the minimum energy of deuterons below which nuclear fusion is inefficient, /(e.io„, T) = T-1 cxp(—£i0n/T) is a nearly Maxwellian ion energy distribution function normalized to unity with the "temperature" T = eE/NLP{a,) [19 21,25], and (crL) is the averaged charge transfer cross section. The rate ■¡.,j<,„1ff/U8(f;Ks) of the reaction 2H(2H,n)3He is a weaker function of the ion energy eion than f{£ion,T), and therefore, after extracting the average rate of the fusion (i'ion^ion(sfu»)) from the integral in (1), the reduced field strength required for producing Ar„. = 1 can

strength 3 MV,'(ni-atni) required for self-breakdown in a homogeneous field [27,28], but even the strength of the fields generated in small gaps of centimeter range with the use of high-voltage pulses of hundreds kilovolt with subnanosecond or even picosecond rise times allowing preventing the conventional breakdown and rapid collapse of the voltage (cf., e.g., [25,31] and the references therein). The above estimation, being very conservative relative to all parameters, confirms that nuclear fusion is absolutely impossible in relatively slow process of lightning discharge in such a dense medium as lower layers of the atmosphere.

below the self-breakdown limit 6 « 14, is not too much less than £¿/¡,N(7, In). The authors of [6], while substantiating their doubts concerning the capability of (7, Arn) reactions to account for the neutron flux amplifications in a thunderstorm atmosphere, wrote that