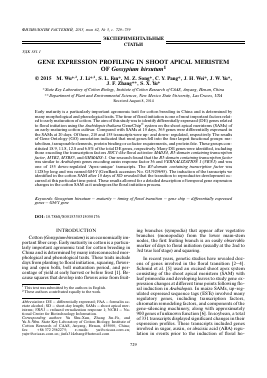 Early maturity is a particularly important agronomic trait for cotton breeding in China and is determined by many morphological and phenological traits. The time of floral initiation is one of most important factors related to early maturation of cotton. The aim of this study was to identify differentially expressed (DE) genes related to floral initiation using the Arabidopsis thaliana GeneChip® system on the shoot apical meristems (SAMs) of an early-maturing cotton cultivar. Compared with SAMs at 10 days, 365 genes were differentially expressed in the SAMs at 20 days. Of these, 210 and 155 transcripts were up- and down- regulated, respectively. The results of Gene Ontology (GO) annotation indicated that most genes fell into the four largest functional groups: metabolism, transposable elements, protein binding or cofactor requirements, and protein fate. These groups constituted 18.9, 11.8, 12.8 and 6.8% of the total DE genes, respectively. Many DE genes were identified, including those encoding the transcription factors SOC1-like floral activator MADS4, B3-domain containing transcription factor, MYB2, MYB85, and GHMADS-1. Our research found that the B3-domain containing transcription factor was similar to Arabidopsis genes encoding auxin response factor 36 and VERNALIZATION 1 (VRN1) and was one of 155 down-regulated 'Apex-unique' transcripts. The B3-domain containing transcription factor was 1128 bp long and was named GhV1 (GenBank accession No. GU929695). The induction of the transcripts we identified in the cotton SAM after 10 days of SD revealed that the transition to reproductive development occurred at this particular time point. These results allowed for a detailed description of temporal gene expression changes in the cotton SAM as it undergoes the floral initiation process.

Cotton (Gossypium hirsutum) is an economically important fiber crop. Early maturity in cotton is a particularly important agronomic trait for cotton breeding in China and is determined by many interconnected morphological and phenological traits. These traits include days from planting to floral initiation, squaring, flowering and open bolls, boll maturation period, and percentage of yield at early harvest or before frost [1]. Because squares that develop into flowers arise from fruit-

ing branches (sympodia) that appear after vegetative branches (monopodia) from the lower main-stem nodes, the first fruiting branch is an easily observable marker of days to floral initiation (usually at the 2nd to 3rd true leaf stage) and squaring.

Microarray technology is a powerful tool for analyzing the expression of thousands of genes in a single experiment [9, 10]. Affymetrix GeneChips have set the standard in terms of reproducibility, sensitivity and other quality parameters relative to other oligonucleotide or cDNA array platforms [11]. Unfortunately, plant-related Affymetrix Whole Genomic GeneChips are only available for a limited number of plant species. Although GeneChip Cotton arrays are also available, they have been used infrequently in the research community due to the limited genome coverage offered and the numerous ESTs that are not annotated.

One possible solution to this limitation is to utilize heterologous microarrays from related species [12]. For example, heterologous Arabidopsis GeneChips have been recently used to study drought stress in a non-model banana, Musa spp. [13]. Boutanaev et al. reported the successful use of heterologous microar-rays, including those for Arabidopsis and rice, for the study of defense responses in plants [14]. Horvath et al. used an Arabidopsis cDNA microarray to identify conserved and differentially expressed (DE) genes involved in shoot growth and development in distantly related plant species, such as Arabidopsis leafy spurge, poplar, and wild oat [15]. Tomato microarrays were used to compare gene expression among several Solanaceae species, including pepper, eggplant, and potato [16, 17]. Similarly, Arabidopsis appears to be compatible with cotton for conducting a heterologous microarray approach because the two species are phy-logenetically related [18]. Carica papaya, Gossypium raimondii, Theobroma cacao and Arabidopsis thaliana belong to a subclade that diverged approximately 82.3 million years ago [19]. A cotton cDNA microar-ray was used to identify changes in gene expression in velvetleaf due to competition with corn [20]. Nazar et al. recently demonstrated that "whether using homologous or heterologous arrays, the chances of seeing interesting differences are similar" [21]. Therefore, heterologous microarrays can be used to study gene expression before complete genome sequence data are available for even distantly related species of interest.

In the present study, gene expression profiling was designed to analyze genes which expression patterns were altered between short-season cotton and later-maturing genotypes. We used the Arabidopsis GeneChip microarray to query the cotton SAM as it underwent the floral initiation process.

Plant materials and growth conditions. Plants of CCRI36 (a short-season cotton cultivar with a whole growth period of 107 days) and TM-1 (a later-maturing genotype with a whole growth period of 132 days) were grown under standard field conditions in Anyang, Henan, China during the summer of 2009. These two cotton genotypes were sown at the same time under the same management conditions. After seeds germinated, we carefully observed and recorded the emergence time, leaf unfolding and rate of growth. From the cotyledon to the first true leaf stage, seedling shoot apices were collected for histology and fixed in FAA (formalin-acetate-alcohol). Shoot apices starting at the base of the apex and any leaf primordia <0.2 mm in length (after exposure to 10 and 20 days of short-day length, SD), mature floral buds (bracts, sepals, petals, stamens, and carpels), roots, stems, fiber, ovules, and leaves of the CCRI36 cultivar were prepared, frozen in liquid nitrogen, and stored at —80°C until further processing.

Histological techniques and microscopy. Under our experimental conditions, plants were grown under SD conditions, and SAMs were dissected after exposure to 5 to 40 days of SD in order to capture transcripts that were essential in establishing the floral meristem. Apices were harvested in triplicate and used for dissection and production of paraffin sections.

RNA preparation. RNA isolation was conducted using the Sigma Spectrum™ Plant Total RNA Kit ("Sigma-Aldrich", USA) with on-column DNasel digestion according to the manufacturer's instructions. RNA quantity was determined by using a DU®800 spectrophotometer ("Beckman coulter", USA). An RNA integrity number (RIN) was determined for each sample. Only samples with RIN values of 1.9 to 2.1 were used for further analysis. An oligo(dT) primer was used to prime first-strand cDNA synthesis from 5 ^g of total RNA using the SuperScript III reverse transcriptase enzyme ("Invitrogen", USA) according to the manufacturer's instructions. A single reverse transcription (RT) reaction was performed for each RNA sample.

Microarray experiments and statistical analysis. To