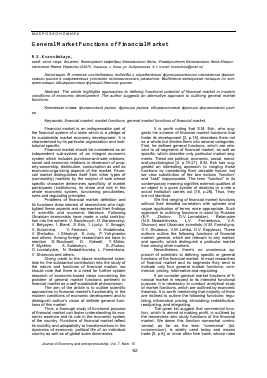 Financial market is an indispensable part of the financial system of a state which is a pledge of its sustainable market economy development. It is characterized by its particular organization and institutional specific.

Financial market should be considered as an independent sub-system of an integral economic system which includes purchase-and-sale relations, social and economic relations in dimension of property-ownership, distribution, consumption as well as economic-organizing aspects of the market. Financial market distinguishes itself from other types of (commodity) markets by the subject of sale whose specific character determines specificity of market participants (institutions), its share and role in the whole economic system, functioning peculiarities, rules and regulating principles.

Giving credit to the above mentioned scientists for the substantial contribution into the study of the nature and functions of financial market, we should note that there is a need for further system research of economic-based views concerning the problem of general market functions pertinent to financial market as a self-sustainable phenomenon.

The aim of the article is to outline scientific approaches to financial market's functionality in the modern conditions of economic development and to distinguish author's vision of definite general functions of this market.

Thus, a thorough study of functional purpose of financial market can foster understanding its economic essence and its role in the economic system of the country. Functions of financial market reflect its mobility and adaptability to transformations in the dynamics of economic, political life of an individual country as well as of global scale dimensions.

It is worth noting that S.M. Esh, who suggests his scheme of financial market functions that foster its development [2, p.18], describes them not as a whole but divides them into several categories. First, he defines general functions, which are relevant to all segments of financial market, as well as specific, which describe only particular market segments. These are political, economic, social, moral-and-psychological [2, p.19-21]. S.M. Esh has suggested an interesting approach to ranging these functions by considering their versatile nature, but we view substitution of the two notions "function" and "task" inappropriate. The term "function" in its contemporary meaning signifies external qualities of an object in a given system of relations or a role a social institution carries out [18, p.28]. Thus, they are not identical.

We find ranging of financial market functions without their detailed correlation with spheres and vague application of terms more appropriate. Such approach to outlining functions is used by Russian (E.F. Zhukov, O.V. Lomatidze), Belarusian (n.S. Nedashkivska, L.V. Fomenkova, V.A. Shamov) and Ukrainian scientists (V.M. Fomishyna, O.Y. Shuteeva, V.M. Lehka, O.V. Kopylova). These authors outline the following functions of financial market: general, which are relevant to any market, and specific, which distinguish a particular market from among other markets.

Nevertheless, there's no unanimous approach of scientists to defining specific or general functions of the financial market. In most researches of financial market and its segments they tend to indicate only four general market functions: commercial, pricing, informative and regulating.

If we consider general market functions of financial market in respect to its intended functional purpose, it is necessary to conduct analytical study of market functions, which are outlined by economic theorists. It is worth mentioning that majority of them are inclined to outline the following functions: regulating, informative, pricing, stimulating, redistributive, readjusting, and integrating.

The given list suggest that commercial function, which is aimed at making profit, is outlined by the researches who study functions of the financial market. We deem this function somewhat controversial, as far as the term "commerce" (lat. commercium), is widely used today and means trade [5, p.6], or more often free trade, whose rules

are determined by competition, private ownership, risk management, free enterprise and individualism to earn profit [12, p.5]. Market is the place where merchandise and services are traded. Consequently, outlining commercial function of the market is only one but not fully appropriate confirmation of commercial (trade) function of the "market".

Regulating function of the market has different interpretations in works of scientists who work in the sphere of finances and economic theory. Some of them [3; 16; 20] deem this function as the role of market in setting rules of trade and participating in this process, regulating trade disputes between participants of the market, setting priorities and informing regulating and coordinating institutions.

On the contrary to this, specialists of economic theory say that regulating function reflects structure of supply, distribution and redistribution of resources according to solvent demand. In this respect V.G. Chapinoga claims that on one hand regulating function of the market is to learn the system of demands in society which need to be satisfied; on the other hand it is to set proportions for distribution of economic resources in order to produce necessary merchandise to satisfy the demand... As a result, market is a regulator of proportions in economics; it is capable of changing amount and structure of the merchandise, adapting them to solvent demand [19].

It would be possible to say that markets are "directors" of labor management, production, distribution, exchange and consumption. They coordinate social and economic processes by means of self-organization of economic agents [13, p.193].

We deem this point of view as the best explanation of regulating function which also efficiently reveals economic nature of the market. Nevertheless, in this case the role of market in setting trade rules for signing agreements and payments, regulation of disputes between market agents is generally described as a component of trade organization. We consider introducing one more general market function - organizational.

V.D. Bazylevych emphasizes that allocating function is pertinent to any type of market. It reflects the ability of a market to produce an optimum combination of merchandise and goods by means of efficient combination of resources [1].

Among general market functions S.V. Mochernyi also outlines developmental function, which is aimed at stimulating competition among the manufacturers of goods and services within particular countries as well as globally; so they are locomotives of economic development [10]. Meanwhile, it is hard to explain why the scientist also suggests incit-

ing (stimulating) function which on the macro level states that the role of market is to stimulate scientific progress, boost efficiency of productive agents whereas encouragement of competition is referred to developmental function.

We also deem inappropriate outlining controlling function [9; 10; 15] which is just an extended interpretation of regulating function. As fostering consumers' control of which products or services are needed happens during market regulation of demand and supply. During this process qualitative and quantitative correspondence between volume of production output and cumulative demand is reached, proportions in economy are set and sustainable restoring process takes place [