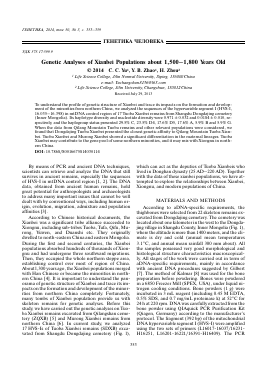 To understand the profile of genetic structure of Xianbei and trace its impacts on the formation and development of the minorities from northern China, we analyzed the sequences of the hypervariable segment I (HVS-I, 16.035—16.398) in mtDNA control region of 17 Tuoba Xianbei remains from Shangdu Dongdajing cemetery (Inner Mongolia). Its haplotype diversity and nucleotide diversity were 0.971 ± 0.032 and 0.0184 ± 0.010, respectively, and the haplogroup status presented 29.5% C, 23.5% D4, 17.6% D5, 17.6% A, 5.9% B and 5.9% G. When the data from Qilang Mountain Tuoba remains and other relevant populations were considered, we found that Dongdajing Tuoba Xianbei presented the closest genetic affinity to Qilang Mountain Tuoba Xianbei. Tuoba Xianbei and Murong Xianbei showed a significant differentiation in the maternal lineages. Tuoba Xianbei may contribute to the gene pool of some northern minorities, and it may mix with Xiongnu in northern China.

By means of PCR and ancient DNA techniques, scientists can retrieve and analyze the DNA that still survives in ancient remains, especially the sequences of HVS-I in mtDNA control region [1, 2]. The DNA data, obtained from ancient human remains, hold great potential for anthropologists and archaeologists to address many important issues that cannot be well dealt with by conventional ways, including human origin, evolution, migration, admixture and population affinities [3].

According to Chinese historical documents, the Xianbei was a significant tribe alliance succeeded to Xiongnu, including sub-tribes Tuoba, Tufa, Qifu, Murong, Yuwen, and Duanshi etc. They originally dwelled to north-eastern China and eastern Mongolia. During the first and second centuries, the Xianbei populations absorbed hundreds of thousands of Xiongnu and had undergone three southward migrations. Then, they occupied the whole northern steppe area, establishing control over most of region of China. About l,300 years ago, the Xianbei populations merged with Han Chinese or became the minorities in northern China [4]. It is important to understand the panorama of genetic structure of Xianbei and trace its impacts on the formation and development of the minorities from northern China completely. Fortunately, many tombs of Xianbei population provide us with skeleton remains for genetic analyses. Before this study, we have carried out the genetic analyses on Tuo-ba Xianbei remains excavated from Qilangshan cemetery (ZQXB) [5] and Murong Xianbei remains from northern China [6]. In current study, we analyzed 17 HVS-Is of Tuoba Xianbei remains (SDXB) excavated from Shangdu Dongdajing cemetery (Fig. l),

which can act as the deputies of Tuoba Xianbeis who lived in Donghan dynasty (25 AD—220 AD). Together with the data of these xianbei populations, we have attempted to explore the relationships between Xianbei, Xiongnu, and modern populations of China.

According to aDNA-specific requirements, the thighbones were selected from 22 skeleton remains excavated from Dongdajing cemetery. The cemetery was located about one kilometer in the west to the Dongdajing village in Shangdu County, Inner Mongolia (Fig. 1), where the altitude is more than 1400 meters, and the climate is dry and cold (annual mean temperatures 3.1°C, and annual mean rainfall 300 mm about). All the samples possessed very good morphological and histological structure characteristics macroscopical-ly. All stages of the work were carried out in term of aDNA-specific requirements, mainly in accordance with ancient DNA procedures suggested by Gilbert [7]. The method of Kalmar [8] was used for the bone preparation before powdering. Bones were powdered in a 6850 Freezer Mill (SPEX, USA), under liquid nitrogen cooling conditions. Bone powders (1 g) were incubated in 3 mL reagent (including 0.45 M EDTA, 0.5% SDS, and 0.7 mg/mL proteinase k) at 52°C for 24 h at 220 rpm. DNA was carefully extracted from the bone powder using QIAquick PCR Purification Kit (Qiagen, Germany) according to the manufacturer's protocol. The fragment (392 bp) of the mitochondrial DNA hypervariable segment I (HVS-I) were amplified using the two sets of primers (L16017-16037/16231-H16251, L16201-16221/16391-H16409). The PCR

protocols were previously published [5]. Amplification products were purified with QIAquick Gel Extraction Kit (Qiagen) and were sequenced using the ABI 310 Terminator Sequencing kit (PE Applied Biosystems) according to the manufacturer's instructions. Then they were analyzed on the ABI PRISM 310 automatic sequencer (PE Applied Biosystems). Five samples were randomly selected to be cloned using Promega Cloning kit according to the manufacturer's instructions. Each sample was replicated independently by different laboratory members. Haplogroup M, C, D, D4 and D5 were examined by checking positions 10400, 14318, 5178, 3010 and 16189, using amplified product-length polymorphisms (APLP) method [9]. Haplogroup A and G were examined 663 and 4833 using sequencing method. Haplogroup B was checked by screening for the 9 bp deletion in the COII/tR-NALys region. The primers are listed in Table 1.

The sequences were edited and compared with the revised Cambridge reference sequence [10]. The data on the northern minorities of China [11], northern Asians [12, 13], Outer Mongolians [13], Han Chinese [14, 15] and the southern minorities of China [16—18] were retrieved from published reports. According to the linguistic characteristics, these populations were classfied as Altaic, Han, Tibeto-Burman, Hmong-

Table 1. All primers used in this study

fell into those of the steppe (Central Asian) populations (around 0.99) and Siberian (North Asia